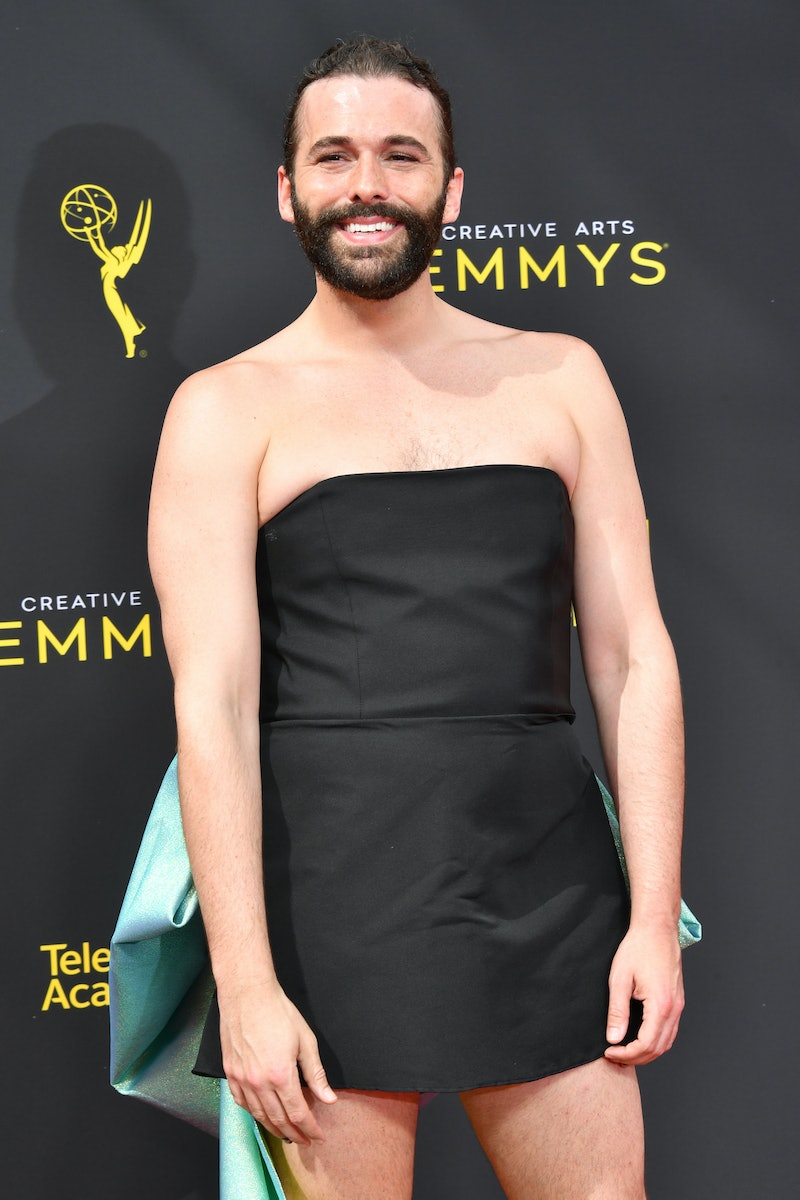 Now that's a little black dress with a twist. Infinitely stylish Queer Eye star Jonathan Van Ness wore an LBD with a bow and a train to the 2019 Creative Arts Emmys on Sept. 14 in Los Angeles. If you think that little black dresses are boring, Van Ness' take will definitely change your mind.

The silk metallic bow dress was custom Christian Siriano design, according to a press release from the designer. The gown looked like a deceptively simple strapless black mini from the front. However, a massive, mint green bow in the back added a major — and unexpected — pop of color. The yellow lining of the bow's train gave it a swirled, two-toned effect. Ultimately, the dress was JVN's modern and unique take on the mullet hem. He paired the dress with black open-toe platform booties with a white heel. It was all about the color contrasts with this look.

JVN also carried a black envelope clutch as his sole accessory. He skipped jewelry, allowing the bow made the biggest statement. He wore his long black locks swept back off his face in a bun while his signature beard was a perfectly groomed finishing touch.

Van Ness and Siriano are both are beacons of fluid fashion. Siriano has had quite a banner year, creating breathtaking couture designs for his high-profile clients and beyond. It was Siriano who designed actor Billy Porter's black velvet tuxedo gown from the 2019 Oscars. The bow dress he created for JVN embodied the same spirit.

The rest of the Queer Eye cast turned up on the red carpet in head-turning attire, too. JVN's co-stars Antoni Porowski and Bobby Berk opted all-black suits with details unique to each of them, like a bow tie for Porowski and an oversized look for Berk. Tan France paired a floral print sherwani with white pants and shoes, while Karamo Brown wore an embellished military-inspired jacket with a fur-trimmed collar and gold buttons. The Fab Five looked, well, fab AF.

In a particularly sweet moment, France actually helped to adjust JVN's train while he was posing on the red carpet. Once a stylist, always a stylist.

The Queer Eye reboot currently airs on Netflix and was nominated in multiple categories at the Creative Arts Emmys. The show took home several awards. But the award for most show-stopping fashion definitely goes to JVN.

More like this
Harry Styles Has Become An Accidental Vinted Model
By El Hunt
Kylie Jenner Wore A Stunning Corset Dress For Paris Couture Week
By Dominique Norman
'Love Island' Tanyel's Latex Versace Dress Was Gifted By A Former Islander
By El Hunt
Kylie Jenner Rocked A Very Kim Kardashian-Esque Outfit At Couture Week
By Allie Fasanella
Get Even More From Bustle — Sign Up For The Newsletter
From hair trends to relationship advice, our daily newsletter has everything you need to sound like a person who’s on TikTok, even if you aren’t.