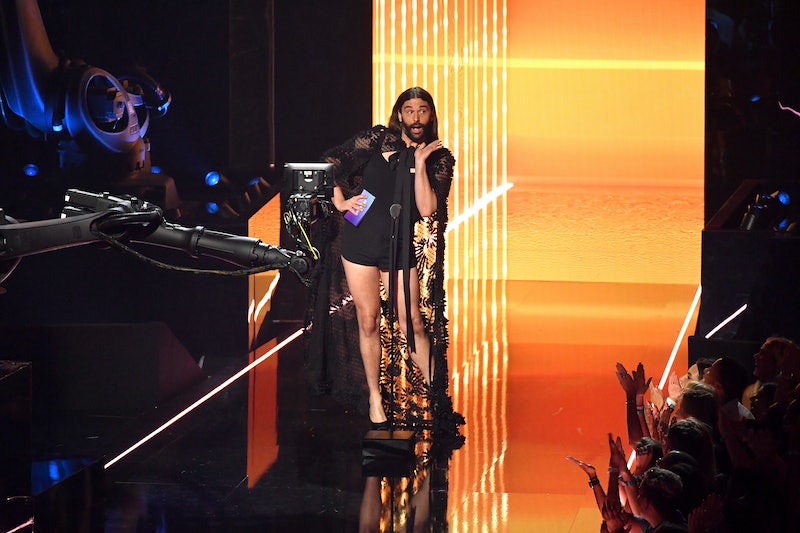 The 2019 MTV Video Music Awards were a big deal for many of those in attendance, including this Queer Eye star. Jonathan Van Ness opened up about his VMAs appearance on Twitter on Aug. 28, explaining exactly why attending the awards show was so huge for him. Unfortunately, Van Ness also had to push back against haters who refuse to be understanding, kind, or supportive of the Netflix personality.

"The VMA’s were so major for me," his first tweet began. "I’ve gotten caught up in reading some really judgmental mean stuff about me. Some people hated my outfit, some hate me, they think I’m fake, irritating, too loud, too femme. But really I have to stay focused."

Clearly, attending the VMAs was a really big deal for Van Ness, especially because he never saw himself represented on the awards show when he was younger. And then for him to be able to present an award to Taylor Swift and Todrick Hall for Video for Good made the moment even more special, the Queer Eye star said in a follow-up tweet.

"When I was young I wasn’t seeing people like me on the VMAs presenting awards to one of the biggest pop stars around," he explained. "I’m doing work that I’m passionate about and I do it authentically. Reminding myself that this moment is beautiful for me & proud femme non binary people."

These tweets came after Van Ness was misgendered by a blog online, specifically regarding his VMAs outfit, which featured a long black cape. Van Ness is nonbinary and prefers the pronouns "he/him," but he doesn't identify as a man. In an interview with Out Magazine published in June, Van Ness opened up about what being "nonbinary" and "genderqueer" means to him. "Any opportunity I have to break down stereotypes of the binary, I am down for it, I'm here for it," he told Out. "I think that a lot of times gender is used to separate and divide. It's this social construct that I don't really feel like I fit into the way I used to. I always used to think 'Oh, I'm like a gay man,' but I think any way I can let little boys and little girls know that they can express themselves...is really important and exciting."

He also touched upon his feminine side and explained, "I feel like my feminine identity is what makes me the strongest. All the people that I look up to the most, that I want to emulate the most are like 90 percent women. The people who shaped me the most was my mom, my grandma — it’s Gloria, Celine, Aretha, Shania, Mariah."

There's no denying Van Ness is a role model for many individuals. To be able to see someone like the reality star rocking it on Netflix, starring in a Swift music video, and appearing on one of MTV's biggest awards shows, well, it probably means a lot to those who can relate to Van Ness. He should be celebrated for raising awareness, pushing boundaries, and showing it's OK to embrace your true self.

Even though Van Ness has faced criticism, he's not going to let it ruin his VMAs moment. Next to a Wednesday Instagram of him presenting the Video for Good award, he wrote, "Still can’t believe I got to do this. To my team thank you so much, @alibstyle & @brennadmakeup - Thanks @taylorswift for including us in your video & @mtv for having me. Going to stay focused & fighting to use my platform to spread awareness & joy every way I can. thanks for the 🎥 @denisebidot the best friend I could ask for."

Rather than using hate, let's embrace love and kindness. Everyone should follow in Van Ness' footsteps by spreading joy to others, because it makes the world a better place.