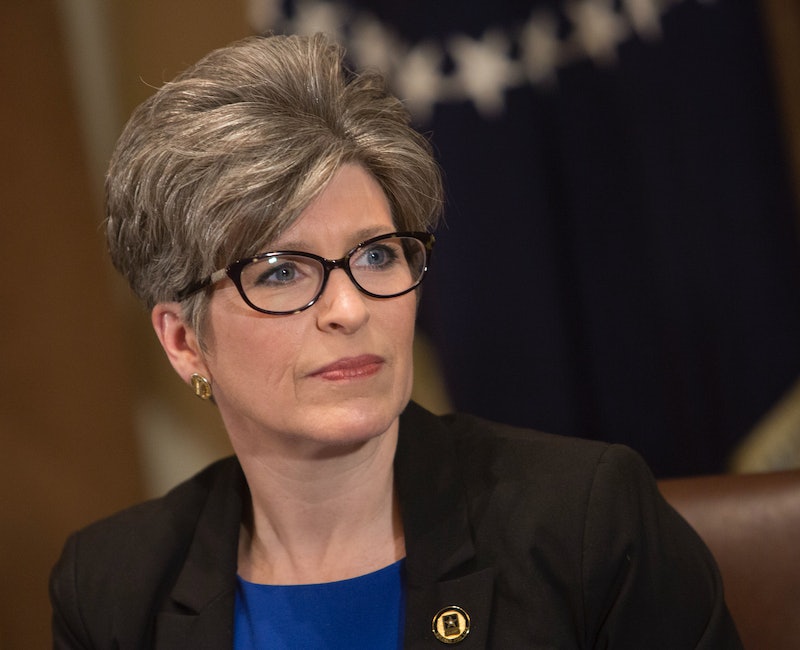 In a court filing for her recently-finalized divorce, Republican Sen. Joni Ernst alleged her ex-husband physically abused her, according to the Des Moines Register, and said that he resented her successful political career and frequently belittled her during their marriage. The senator made the claims in an October affidavit, which she filed in response to an affidavit from her then-husband. Bustle has reached out to a lawyer for Gail Ernst, the senator's ex-husband, for comment.

Ernst, who in 2014 became the first woman elected to the Senate from Iowa, wrote that Gail “hated any successes I had, and would belittle me and get angry any time I achieved a goal.”

“I think so many of our issues stem from my successes and that he has stopped achieving,” she wrote in her affidavit. “Instead of reveling in what could be our shared successes, he gets mean and short with me and anyone who brings up politics or asks what I am working on.”

She also described her ex-husband as "very cruel," according to the Register, adding, "This has been an extremely painful journey."

In the affidavit, Ernst said that she was interviewed by then-candidate Donald Trump during the presidential campaign to possibly serve as his vice president. She said that she “turned Candidate Trump down, knowing it was the right thing for my family,” and that she “continued to make sacrifices and not soar out of concern for Gail and our family.” She did not explicitly say whether Trump offered her the VP position, which was eventually offered to then-Indiana Gov. Mike Pence.

The Ernsts’ divorce was finalized in January and, per Iowa state law, both affidavits were made public, according to the Register. WHOTV acquired and published both documents, which were re-sealed on Tuesday at the Ernsts’ request.

Gail became the subject of controversy during Ernst's Senate run when it was reported that he'd posted inflammatory and violent posts to his Facebook page. In one, he referred to former Department of Homeland Security Secretary Janet Napolitano as a "traitorous skank," while in another he appeared to make a joke about shooting a former lover.

"What do you do if you see your ex running around in your front yard screaming and bloody?," Gail wrote. "Stay calm. Reload. And try again." When the posts were reported in June 2014, Ernst said she was "appalled" to hear of them and called them "clearly inappropriate."

In their affidavits, both Ernst and her ex-husband accused the other of having extramarital affairs. Both denied the accusations, Gail in his affidavit and Ernst in comments to reporters in Cedar Falls on Wednesday.

Gail, who served in the military and is now retired, argued in his affidavit that he shouldn’t have to get a job to support himself, and requested that Ernst pay him $4,000 a month in temporary alimony plus $10,000 for his attorneys fees.

“I should not have to seek employment to be able to continue with my standard of living, considering that I have served my country for 28 years on active duty as an Airborne Ranger” Gail wrote. “I spent 16 total months in hostile fire areas.”

The senator wrote that although Gail had been the primary breadwinner in their family, she assumed this role upon being elected to the Senate. She said she’s received “very little support” from him since becoming a senator, and that he “seems to think he can live off my salary for the rest of his life.”