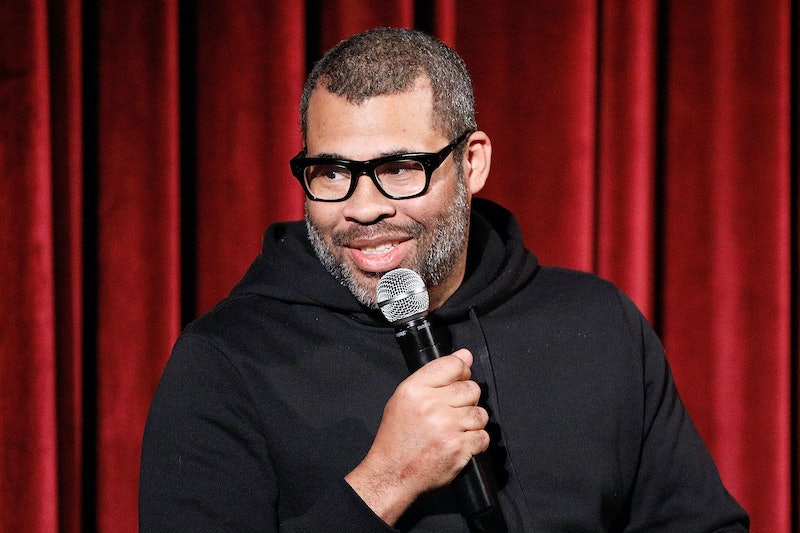 Jordan Peele's films have terrified audiences for the past few years, making him an undeniable king of modern horror. Not only does he just get the horror audience, he knows how to take the genre to the next level, and part of that means making cameos. Now, if you missed the director's cameo in Get Out, then you probably also missed Jordan Peele's Us cameo, but that doesn't make it any less frightening.

In an interview with Fandango shared on March 18, Peele was asked if he would ever act in his films, only to reveal that he had already been in both. "I've made cameos in both of my films," he said, stunning the interviewer. Big fans of Get Out would have already known the first one. "In Get Out, I was the voice of the deer." For those who haven't seen Get Out — no, there was no talking deer — the director is actually referring to the last belt of the dying deer Rose hit with her car while driving Chris to her parents' house.

Peele's Us cameo is pretty similar to his appearance in his first film. "I am a dying rabbit," Peele revealed. Without giving too much away, the dying rabbit scene occurs later in the film. And, just in case you didn't believe him, in the interview Peele demonstrated both the dying deer sound and that of the dying rabbit.

Voice work isn't new for Peele — he played Beta Wolf in Storks (2016) and voiced new character Bunny in Toy Story 4 — but these dying bleats are different, of course.

Rabbits play a key part in Us from the very start of the movie. Without spoiling the film, rabbits are a constant presence, as seen in the trailers, which previewed shots of an entire wall of caged rabbits. The trailer also showed them roaming free in a white, dimly lit hallway. As for why they play such a key role, that has to do with the fact that Peele is actually afraid of them in real life. Speaking to Entertainment Weekly about the movie back in December, Peele touched on why he included rabbits and scissors in the film. "I think rabbits and scissors, they’re both scary things to me, and both inane things," he said. "So I love subverting and bringing out the scariness in things you wouldn’t necessarily associate with that."

In a separate interview with Time Out London published in March, Peele said that the bunnies were easy to incorporate and he sort of just let them do their thing, even if it wasn't exactly PG-13. "Did the sex-crazed bunnies ruin my takes? They made it awkward, but I’m happy to say no bunnies were harmed making the movie," he stated. That said, not everyone emerged from the situation scot-free. "My psyche was harmed, because I find rabbits pretty scary. Them, and cockroaches."

Equating bunnies with cockroaches isn't really what one might expect to hear from someone, unless they're Anya from Buffy the Vampire Slayer, but Peele has his reasons. He told BBC News that their demeanor is what gets to him. "They're very cuddly but they also have a sociopathic expression, and they kind of look past you in a creepy kind of way... Not the biggest brains, rabbits."

Regardless of your feelings on rabbits, whether you think they're cute and fluffy, or animals to fear, thanks to Peele's Us cameo, it's likely you'll never look at the little animals the same again.

More like this
The 50 Most Powerful Characters In The Marvel Universe, Ranked
By Johnny Brayson and Nola Pfau
Lin-Manuel Miranda & Tituss Burgess React To 'Little Mermaid' Casting Backlash
By Radhika Menon
The 'Bachelor In Paradise' Schedule Shifts To 4 Hours Every Week After The Season 8 Premiere
By Brad Witter
Nicola Coughlan Shared A Lady Whistledown Excerpt From ‘Bridgerton’ Season 3
By Grace Wehniainen, Alyssa Lapid and Sam Ramsden
Get Even More From Bustle — Sign Up For The Newsletter