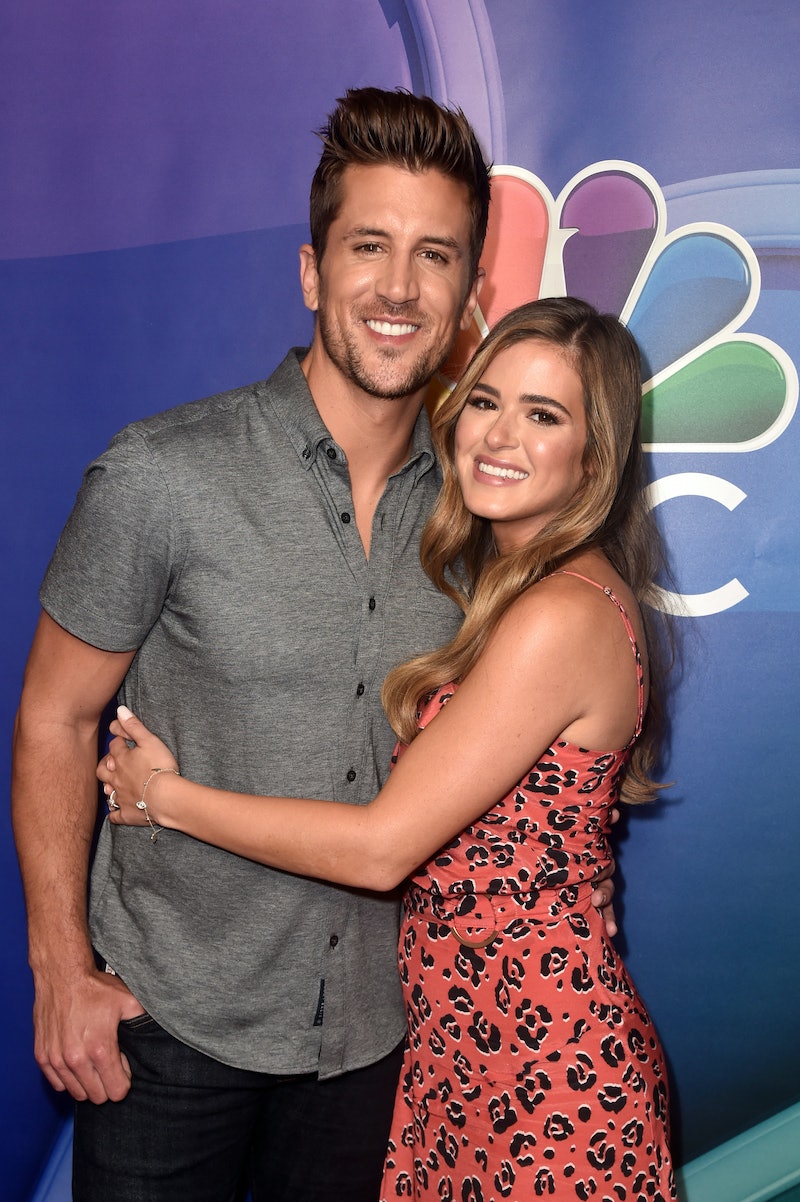 It's been three years since JoJo Fletcher and Jordan Rodgers got engaged on The Bachelorette finale, and now, it's all happening all over again for this couple. Over the weekend, Jordan proposed to JoJo again, presenting her with a brand-new ring now that they've known each other for much longer than they did the first time he popped the question. And not only is her ring gorgeous (obviously), but it also seems like Jordan managed to pull off a seriously sweet and unexpected moment for his now two-time fiancée.

Fans of The Bachelorette know that the finale engagement can be a pretty rushed process — JoJo and Jordan only had a few weeks to fall in love and decide to spend the rest of their lives together, including a proposal that was anything but a private moment for them. Fortunately, for them, it all worked out, but for many others in the franchise, it doesn't, and now, it sounds like Jordan decided it was time to fully symbolize their three years of commitment. And what better time than while planning their upcoming wedding?

On Sunday, Jordan posted a photo of him and JoJo making funny faces as they posed to show off her sparkly new ring, and he explained why he wanted to pop the question a second time.

"I always wanted to re-propose, with no cameras, no producers, no drama...just us," he wrote in a post on Instagram. "Our first engagement was so real, and meant so much to us both, but as we start to actually plan our wedding for next year I wanted to do it all over again, OUR WAY!"

Jordan went on to say that what he loves most about JoJo is "how she treats people, how she loves people, and how she makes me a better man," and now that he's had the time to get to know her, his commitment to her is even stronger.

JoJo also shared a photo of her and Jordan where they were all smiles, opening up in the caption about how much the gesture meant to her. She wrote:

"Yesterday, Jordan asking me to marry him... again!! I didn’t see it coming nor ever expected it... I can’t put into words how much it meant to me @jrodgers11 ... but I think you know by now from me balling hysterically and totally blacking out. The show brought us together and set us up for a truly amazing proposal the first time around, but this time was all YOU. And that means everything and more to me. I can’t wait to marry you! Thank you for loving me so purely and protecting my heart in a way I always used to pray for."

This may not be Jordan and JoJo's first engagement, but it definitely seems like it will be an unforgettable moment for the couple. Now, they can continue wedding planning, and hopefully, fans will be taken along for the ride when they make it official next year.

More like this
Gabby & Rachel Reveal How That 'Bachelorette' Rose Ceremony Twist Happened
By Grace Wehniainen
Everything To Know About 'Bachelor' Host Jesse Palmer
By Justice Namaste and Radhika Menon
It’s Official: 'The Bachelorette' Is No Longer A Fairy Tale
By Samantha Allen
Former 'Bachelor' Producer Elan Gale Knows The Secret To Your Favorite Shows
By Samantha Rollins
Get Even More From Bustle — Sign Up For The Newsletter