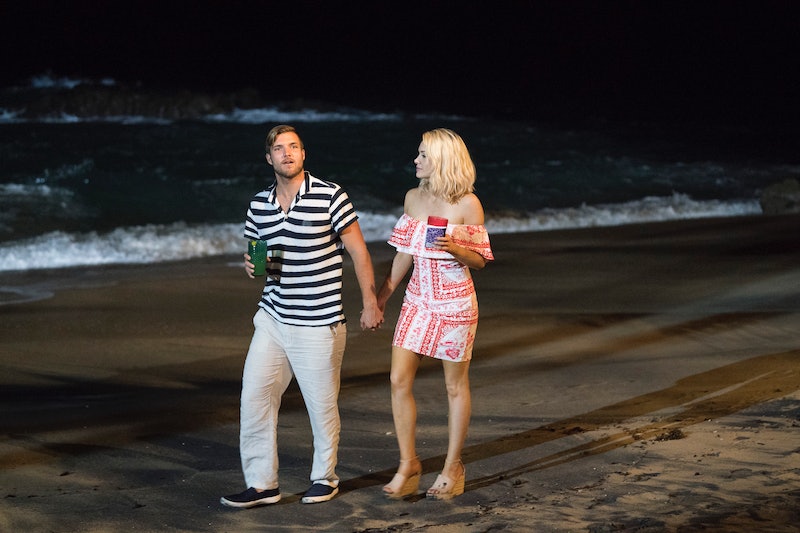 It's always surprising to seasoned Bachelor Nation viewers like myself when a contestant comes in and expects top billing from everyone around him or her. It begs the question — does said contestant know what he or she signed up for? Did he or she not read the contract, the one that's written on reams of paper for the dos and don'ts of being a reality television star? Jordan didn't get a shot with Becca on her season of The Bachelorette, and now, he has a second chance on Bachelor In Paradise. But Jordan's jealousy on Bachelor In Paradise could ruin everything, driving away his new fanbase and, oh yeah — Jenna — the girl he has his eye on.

The rules of Bachelor In Paradise are a little more lax than those of The Bachelorette and The Bachelor. On the former two shows, there's one lead and 30 men or women, respectively, gunning for that person's heart. That's how it works. But on Bachelor In Paradise, it's a free-for-all — people come in, people go out, and everyone can hook up with everyone. It's a bacchanal of badly made margaritas and very wet-sounding kisses. Anyone is up for grabs, as far as relationships go, so why is Jordan so surprised that his alleged girl, Jenna, has eyes for Benoit, another addition to the Sayulita, Mexico set?

Jordan and Jenna have been a couple for about, oh, 15 minutes, but now that Jenna is into Benoit, Jordan is incensed. Somehow, he thinks he owns Jenna. He is so confident in his relationship with Jenna — a woman he has known for three days, literally — that it's mindboggling to him that she would choose anyone else. At the same time, Jenna and Benoit are "Frenching up a storm," if you will. Welp, Jordan is in for a rude awakening, not just from Jenna but also from viewers, myself included, who think all of Jordan's jealous posturing is a major red flag.

Jordan is acting out towards Benoit when he should be talking to Jenna about his feelings. It's not Benoit's fault that Jenna is kissing him. If Jenna were serious about Jordan, she would be with Jordan. Is he really so delusional that he's willing to have full conversations with himself without involving the person he's involved in? And threaten to hurt someone? The answer seems like a yes.

Jordan is going to "shove a baguette down Benoit's French-Canadian throat" (his words, not mine), and really, Jordan's act's of jealousy are so tired. Not only do you not own Jenna, Jordan, but the whole point of being on a show like Bachelor In Paradise is to date around. If you don't smooch a bunch of people on a show like this, well, you may as well stay at home.

This is the problem that Jordan ran into on Becca's season of The Bachelorette — he was so confident in himself that he was surprised when Becca sent his overly tanned butt home. Instead of acting like an adult and speaking to Jenna as to the parameters of their relationship and communicating his own boundaries, Jordan is choosing to act like a man child and lash out at everyone but the person he's actually mad it. It shows that maybe he's not quite ready for the relationship as he claims to be.