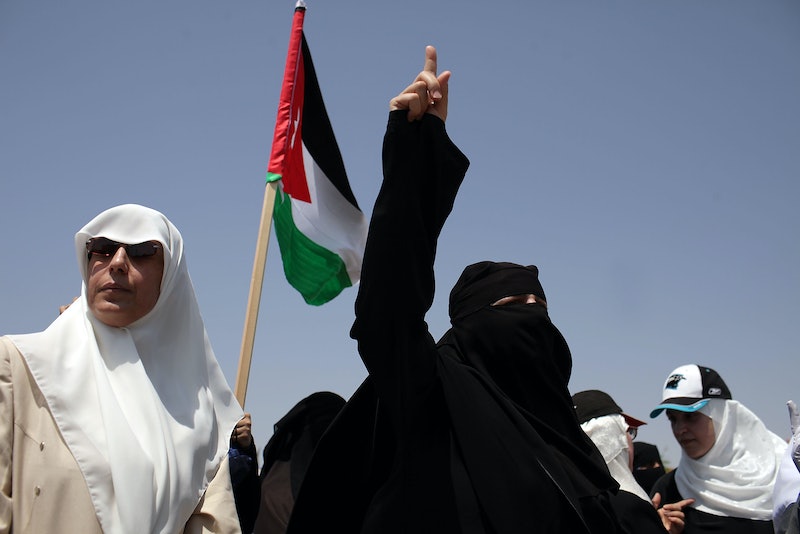 Jordan’s Article 308, a law that allowed rapists to marry their victims in lieu of legal punishment, has been repealed by Jordan’s lower house of Parliament. The vote is a huge victory for proponents of human rights in the Middle Eastern country, who have long called for it to be scrapped. Jordan's "marry the rapist" law, as it's come to be known, is now a thing of the past.

The law is widely seen as a manifestation of an intensely patriarchal culture, in which a woman’s "honor" is often more highly valued than justice against the person who assaulted her. Women who are raped in Jordan may face social stigma from their families or community, accused of bringing shame or dishonor on their family. Marriage is seen by many as a way to erase that dishonor, despite the fact that it can create additional emotional harm for the victim, and does not in any way punish the assaulter.

Last year, Article 308 was updated to allow a rapist to marry their victim “only if she was between the age of 15 and 18 and if the act was consensual,” the Los Angeles Times reported. (This would apply only in the case of statutory rape, where the victim is too young to legally consent.) Jordan’s Ministry of Justice counted 159 rapists who married their victims instead of receiving punishment from 2010-2013, according to the Los Angeles Times, though as with many countries, including the U.S., rape goes drastically underreported in Jordan.

In October 2016, King Abdullah II ordered a review of the country’s entire penal code, which dates back to 1960 and includes Article 308. The upper house of Parliament as well as King Abdullah II must still approve the lower house’s decision, but they are widely expected to do so.

Jordan joins countries like Egypt, Tunisia, and Morocco in getting rid of this harmful law. Lebanon is also taking steps to repeal its version of the law, while the law remains on the books in other Middle Eastern countries like Kuwait, Syria, Iraq, and others. The New York Times points out that this type of law is not at all unique to the Middle East, however: the Philippines still has a “marry the rapist” law in place, while Uruguay had one until 2006. France abolished its version in 1994.

The repeal of this law comes on the heels of another legislative decision to protect the rights of women in Jordan. On Monday, the lower house voted to end a legal loophole that gave judges discretion in sentencing perpetrators of "honor killings," allowing some people to serve as little as six months for killing a female relative.

These are two major gains for the rights of women in Jordan, and the Middle East as a whole, but there’s still work to be done. “What we need to do is to work on amending the complete set of laws that affect the status of women in Jordan,” Salma Nims, secretary-general of the Jordanian National Commission for Women, told Al Jazeera.

Rape culture, in Jordan as in the United States, is not just a product of the laws in each country, but of the cultural subjugation of women, through everything from "joking" sexist comments to actual physical violence. Both laws and attitudes need to come from a place of respect for women in order to make rape culture — along with all "marry the rapist" laws — a thing of the past.