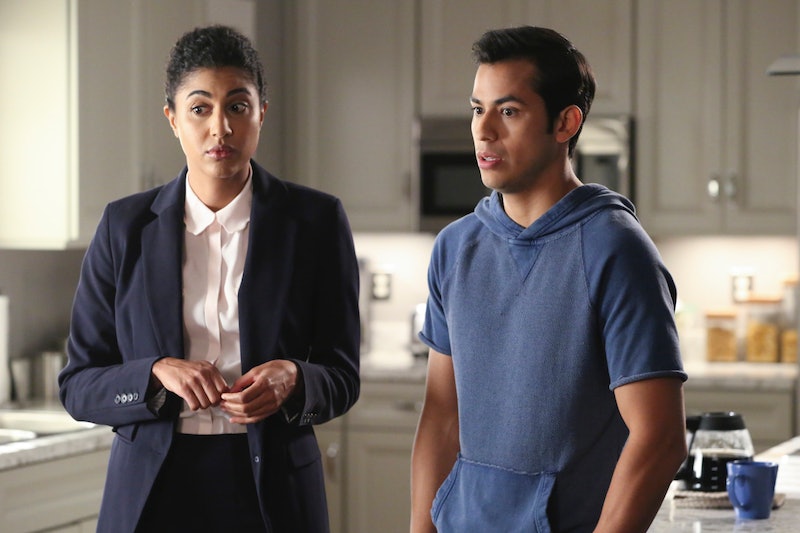 Spoilers ahead for Crazy Ex-Girlfriend Season 4, Episode 3. This week, Rebecca Bunch (Rachel Bloom) is faced with that age old question: Pretzels or law? And while the West Covina lawyer ultimately decides to abandon her legal profession in order to pursue "Rebetzels," she's not the only one who's beginning to take agency of her own life. Josh and Heather on Crazy Ex-Girlfriend — arguably two of the show's most stunted characters — are growing up, too, proving that, at least for Rebecca and co., change can sometimes be contagious.

When Rebecca runs into her ex-fiancé at the therapist, she's incredibly surprised. "Wait, Josh Chan is in therapy?" she says incredulously. And it looks like these sessions are paying off — he and Rebecca proceed to apologize for how they've treated each other. What's more, it's clear that the thickheaded jock is starting to make informed decisions about his future. Josh reveals that he's dating again, but with the intention of finding a mature, healthy relationship. "There's going to be a feeding frenzy in the Cove," Rebecca says supportively. "Josh Chan's on the apps? Like, people's brains are going to explode."

And she's not wrong. However, the women of West Covina apparently didn't get the "serious relationship" memo — one girl gets spooked that Josh is in therapy and the other just wants him for his body. Both of these dates pretend that their Uber drivers are preemptively calling them to see if they need a ride ("Yeah, it's a thing," Zoe, the art historian, says unconvincingly), and sweet, gullible Josh is left wondering what he did wrong.

After learning that Zoe just wants a good time (all of his hobbies involve him being shirtless, after all!), Josh throws on a large hoodie. "Can you see that I'm flexing?" he asks Rebecca. "No you can't, and that's on purpose. This gun show is closed for business!" However, he also learns an invaluable lesson about what he wants out of a relationship. "I don't want to be a concept or an object!" he exclaims, which understandably impresses her. Then, he has an even bigger revelation: "Rebecca, I think I know what I have to do — stop trying to be what who someone else wants me to be and just try to be who I want to be."

This is incredibly profound, especially considering who it's coming from. This is not the same Josh who very rashly decided to become a priest, only to drop out when he realized how academically rigorous it would be. Neither is it the Josh who simply went along with Valencia and Rebecca's wishes, passively staying in unhealthy relationships because he couldn't articulate his feelings. And while he briefly tries to brush up on art history in order to impress a date, he quickly realizes that it's pointless trying to be someone he's not. Josh Chan hates shirts and reading, and he doesn't care who knows it!

Then there's Heather (Vella Lovell) and Hector (Erick Lopez), who very casually decide to get married so that he can use her health insurance for a toe injury. "I mean, toe aside, it just seems easier," Heather says in her perpetually bored monotone. And while marriage is obviously a huge step for the young couple, Heather also learns to compromise. She's usually headstrong, making decisions for the both of them, and it's clear Hector loves how independent she is. But after she realizes he wanted a big, celebratory wedding, she's mature enough to surprise her new husband with a beautiful ceremony, even though it's not what she personally wanted. "I thought you didn't want this," Hector tells her. "I don't," she responds. "But you do. And that's what matters."

In this way, both Josh and Heather are on their own paths — or aisle, if you will — and it's refreshing to see that the show is still giving space and development to secondary characters. Rebecca may technically be the star of Crazy Ex-Girlfriend, but their journeys are no less valid.