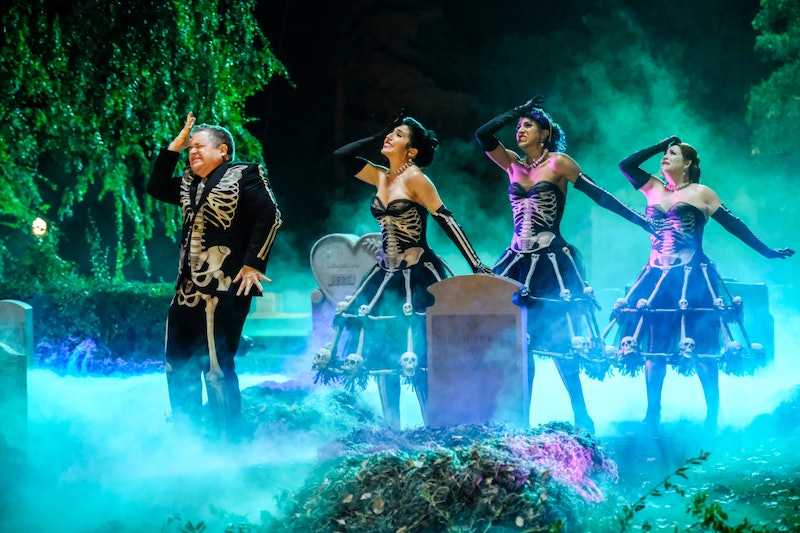 Spoilers for Crazy Ex-Girlfriend Season 4, Episode 2. The scariest thing Rebecca confronts on Crazy Ex-Girlfriend's Halloween-themed episode isn't ghosts or zombies or ghouls — it's her own actions. After a Daily Covina article about her prison release goes viral, she traps herself indoors and spends the next three days reading the vicious comments. She keeps making excuses for why she can't go outside, like cleaning the fridge and masturbating. Eventually, though, she does manage to leave her house, and while Rebecca's mistakes tend to the extreme (she's nicknamed "The Rooftop Killer," after all), with the help of her friends — and Crazy Ex-Girlfriend's "Cringe" song — she learns to accept that we all have embarrassing pasts.

Everywhere Rebecca goes, she's haunted by her missteps. Outside, on the streets of West Covina, Josh looms as a constant reminder of their failed relationship. Indoors, brutal comments keep inundating the Daily Covina, and not just about the whole roof-pushing incident; people dismiss her suicide attempt as a dramatic emergency plane landing and point out she once slept with a married professor. Pretty much any wrong turn Rebecca has ever taken is fair game.

But what finally pushes Rebecca to take action is the mystery surrounding Devon, a college student who was murdered in her house several years ago while purchasing meth. The gross part? She was shot in the intestines and sprayed fecal matter all over the walls. So, Rebecca enlists her best friend squad to hold a séance to contact Devon.

It turns out the drug buy was just one moment of weakness, and Devon was otherwise a star student — much like Rebecca, she's been defined by her biggest mistake, and it's her story that ultimately drives Rebecca to go outside.

"I mean, the poopie on the walls thing is tough; I'm not saying that it's not tough," she tells the girl's tombstone after a trip to the graveyard. "Devon, I know what it's like to feel ashamed. And I know that it's easy sometimes to dwell in that shame rather than move on." However, she says that it's important to push forward, talking to Devon as much as she is herself.

Then, just in time to drive home the point, out pops Castleman (Patton Oswalt), a security guard (who casually admits he murdered someone??) with some words of wisdom to share. "You know, a lot of people are scared of cemeteries," he says. "They come here, spooked, with thoughts of the undead, but what haunts people the most is their own past!" After he's done cackling for dramatic effect, he leads Heather, Valencia, Rebecca, and Paula in "The Cringe," a painfully relatable shame anthem that comes with its own "palm-on-the-forehead" dance move. The women all look fabulous in corseted skeletal costumes, and as corpses jump out of their graves, they sing about the embarrassing moments that keep them up at night.

These include asking a woman who'd just gained weight how long she's been pregnant, laughing at an ex-boyfriend's penis ("It looked like a cute little puppet," Heather says), and hooking up with the bassist from Sugar Ray. These may pale in comparison to Rebecca's faux paus, but as Castleman says, "Crippling shame affects all of us, Rebecca. And not just because you have a history of arson or you slept with your ex-boyfriend's dad." (Wow, drag her.)

So, finally, Rebecca summons up the courage to go out with her friends. And while someone tells the lawyer he dressed up as her for Halloween and asks for a selfie, it all turns out fine. Just like Paula told her back in Season 1, Rebecca's finally starting to face her fears, and that's something to dance about.