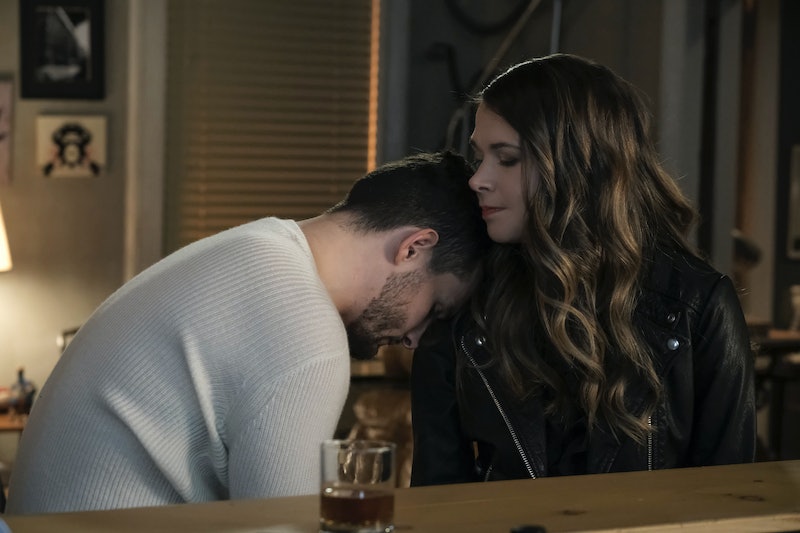 Younger started with the premise that Liza Miller, 40-year-old pretending to be 26-year-old, would have to hide this huge secret from everyone in her world, including her hot 26-year-old boyfriend, Josh. Josh eventually learned the secret and loved Liza anyway, and they will-they-or-won’t-they-ed through four whole seasons. Once thought to be the OTP of the show, Liza and Josh are completely over on Younger, and Josh was totally right to walk away.

Having been in one of those on-again, off-again relationships where it would only work if one certain party ended it, I can attest to the fact that Josh and Liza need to call the whole thing off. Well, Josh needs to call off his feelings for Liza, really. Liza and Josh have been a “nope” in Liza’s mind since she realized she was in love with Charles.

But Josh has been pining for Liza all of this time — through a quickie wedding to Clare and some one-night stands and an existential crisis, for Josh, it has always been Liza. It doesn’t help that Caitlin, Liza’s daughter is all, “You and my mom belong together!” The reality is that Josh needs to move on into the rest of his life, and he needs to do it without the albatross of Liza hanging from his neck. And it looks like he's finally poised to do just that.

Liza has moved onto Charles, whom Josh hates, mostly because Josh caught Liza and Charles kissing when Josh was going to propose to Liza. (Reasonable.) Josh also got in a fight with Charles at the company picnic, which was not reasonable. Josh shouldn’t make any decisions based on Charles, but Liza’s telling Josh about her new relationship with Charles should be the last straw for Josh. “You don’t even know what real is anymore,” he tells her. When Liza says that she and Charles are the real deal, Josh asks, “How can it be when you’re sneaking [around]?”

Liza has played a substantial role in Josh’s mid-to-late 20s. She was a huge relationship for him. She helped encourage him to take Inkburg and expand it, which will be something he'll likely thank her for later.

But ultimately, Liza is out for only Liza. She’s not a bad person, but she’s painted herself into such a corner that her lies control her. Liza’s relationship with Charles is a secret because it "has to be." Her age is a secret because it "has to be." For Josh — a man who lives out loud and out in the open — Liza isn’t sustainable because Liza will, frankly, hurt whoever is in her path to save herself. She doesn’t do it willingly, but it tends to happen.

Josh stands now, a man alone, at the great precipice of the rest of his life. He has a lot to look forward to — he has great friends and roommates, a thriving business, and a full head of hair. Younger would be exceptional if it expanded Josh’s role past being Liza’s ex and into his own storylines. His chemistry with Maggie and Lauren is exceptional, and perhaps it’s just thing to lead Josh away from Liza now and forever. One can only hope.