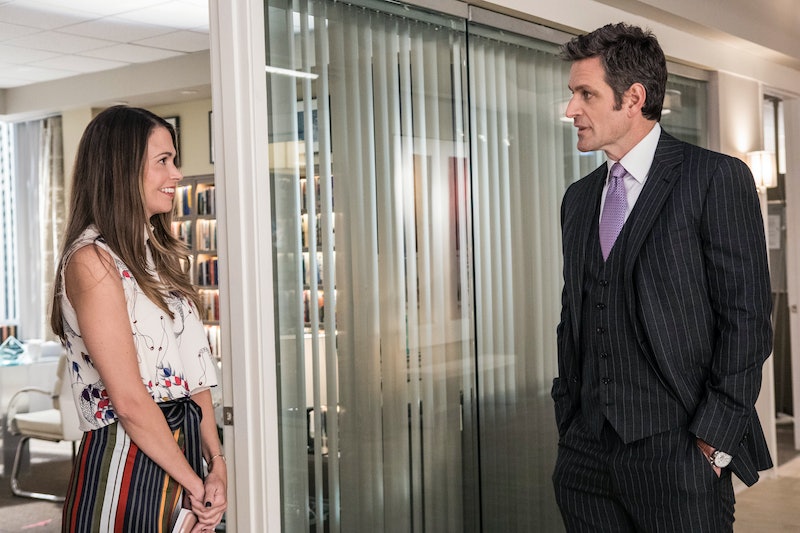 The first Christmas episode of Younger, and the show provides us with a Christmas miracle! A miracle indeed, as Liza and Charles kissed on Younger! This viewer screamed when it happened, as I’m sure many others who were on #TeamCharles did, too. (Sorry for those people who are rooting for Liza and Josh to get together… I’m not sure you’re going to get your way here.) Charles and Liza are together on Younger, and while that’s absolutely amazing, if Charles and Liza want to make this relationship official, they’re going to have to face a whole host of obstacles. The honeymoon is basically over.

Charles has been able to so much as look at Liza since he found out her true age, and she’s sick of it. It took nearly all season for Liza to tell Charles to cut the crap and stop punishing her for what she had to do to get her career back in shape. It’s easy to see this from both ways — Charles feels like he doesn’t know Liza, but Charles also is the same age as Liza and loves her, so he needs to just stop this pouty nonsense and get it together. What breaks him is a chance encounter at a party — Charles’ friend, Bob, is Caitlin’s roommate’s dad, and everyone’s invited to their holiday party, including Liza's ex-husband and Caitlin.

Charles and Liza pretend to not know each other, but when Charles sees Liza doing a Sound Of Music dance with Caitlin (it’s a holiday thing — don’t ask), he knows she’s the one for him. Also, let it be known that Sutton Foster's yodeling just shows what a national treasure she really is.

Far be it from me to condemn a romantic moment, because watching Charles and Liza finally kiss — in the snow, no less — was the pinnacle of seven episodes of stress and pain. But I’m a realist here. Liza and Charles are clearly made for each other. They’re perfectly paired. But there are plenty of people who won’t be happy for them, and the sooner they see that, the sooner they can tackle what happens next.

Charles is always in Josh’s way. Remember how he was going to prose until he saw them smooching in the Hamptons? Now, Caitlin told Josh that he was the best thing for her mother (Caitlin doesn’t know about Charles), and you know that Josh is going to get it in his head that he needs to come back and try for Liza’s heart one more time. Ugh, Josh. Move on, please. And Caitlin shouldn’t butt into her mother’s love life because, as Liza said, it’s none of her business.

The Lawyers At Empirical

For Charles to be dating an assistant is a gross misuse of his power, and it opens him up to all sorts of lawsuits at Empirical — bosses and subordinates can’t be in relationships due to the weird balance of power. It makes it better that Liza is actually in her 40s, because Charles isn’t taking advantage of a younger woman here, but Liza may have to step back from her duties if they take this public.

Diana is half in-love with Charles and always has been. I’m sure she won’t be thrilled that her assistant bagged him. It may help, though, that Liza is not 26 years old and that Diana is dating Enzo now. We’ll see.

Kelsey would either be really happy for her friend or really annoyed that Liza hid her feelings for Charles for so long. This one is also complicated. Hopefully, Kelsey would lean towards happy and ask for hot details instead of getting all huffy about her friend's secret crush.

Charles’ soon-to-be ex-wife is working with Liza on her book, Marriage Vacation. The book is about Charles and Pauline and their marriage, so to find out that editor of her book is the nail in the coffin of her marriage, well… that won’t go over so well with Pauline. It may make their divorce contentious, and it could put Empirical in jeopardy, as Pauline could demand to take her book from her husband and Liza.

Loving love is wonderful, and loving that Charles and Liza finally smooched it out on Younger is also wonderful. But these two lovebirds have a lot to figure out in terms of how their relationship fits into the real world. Or if it even can at all.