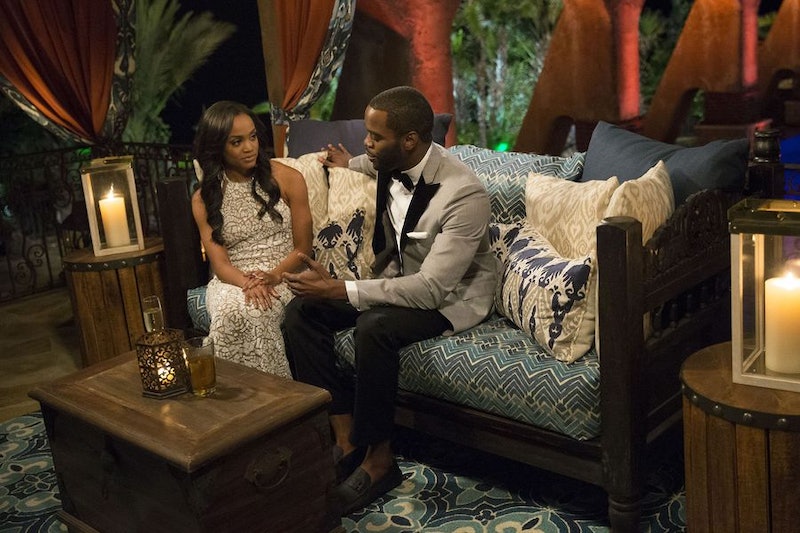 When Rachel Lindsay's cast of suitors pulled up in their limos, I was impressed: This cast is by far the most racially diverse I've ever seen on The Bachelorette, and not just because Rachel is choosing from a larger group than normal. And out of the many, many contenders, Josiah seems like an early frontrunner, since he's a lawyer, just like Rachel, and they're both laid back, good looking, and a little corny. Plus, Josiah shared his backstory on The Bachelorette, and it was exactly the kind of thing that doesn't often get brought up on the show (which usually keeps it pretty light). It's a good thing that his story was featured — there's more than just one kind of diversity. Diversity of experience counts too, and Josiah's story of how his brother committed suicide as a child and the way that impacted his life was moving and new for the show.

There is one little thing that does get to me, though, and it speaks to a double standard that The Bachelorette probably isn't used to navigating. When he pulled Rachel aside for their first real conversation, Josiah talked about how his life after his brother's death included a troubled childhood and an arrest when he was 12 — and how he changed things around to go to college and get a law degree. Now, he's a prosecutor who stayed in his hometown and even started working in the same courtroom where he was given a second chance after his arrest. Their shared dedication to their communities was an early similarity that bonded Rachel and Josiah.

But Josiah has mentioned his past and how much he denounces it multiple times already, whereas it's hard to imagine that any of the many white guys cast on the show would ever be expected to make a point of how they turned things around from their middle school days. Of course, maybe I'm influenced by the statistical data that explains how black students are suspended at higher rates than their white peers, and arrested at higher rates than them as well. Therefore, I do think it's notable that Josiah's past struggles have been mentioned when other members of the cast have reportedly faced their own legal troubles, but there's been no word of that on the show.

I think Josiah would have mentioned his backstory no matter what, since it seems really important to him, and he's turned it into one of his biggest motivators for giving back to his community. However, this is a time when black men are constantly forced to prove that they aren't "thugs," even if they're the victim of a hate crime. So, it's frustrating to see Josiah's narrative lean the same way. That's not necessarily The Bachelorette's fault, but it is worth noting how larger cultural issues inform everything, even in an entertaining episode of reality television. And, I'll definitely be watching how Josiah's story is handled going forward.