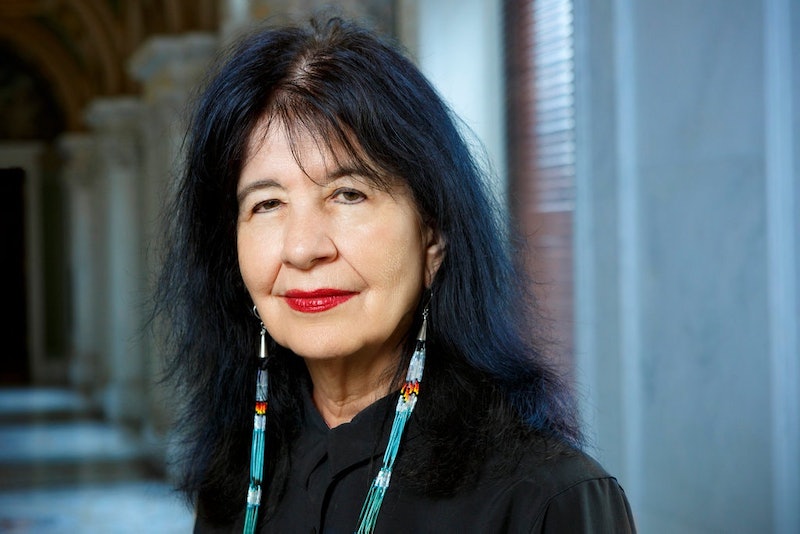 Just one day after Elizabeth Acevedo became the first person of color to be awarded the Carnegie Medal in the U.K. for her debut YA novel, The Poet X, the literary world has more historic news. Writer, musician and poet Joy Harjo has been named the very first Native American U.S. Poet Laureate since the position was created in 1937.

Harjo, who was born in Oklahoma and is a member of the Muskogee Creek Nation, is known for centering Native American stories, lives, and legends in her work, which includes eight poetry collections, her 2012 memoir Crazy Horse, two children's books, and four music albums. Her 1990 collection, In Mad Love and War, won the American Book Award, and her work has garnered various other prestigious awards, including the PEN Open Book Award, the American Indian Distinguished Achievement in the Arts Award, and a National Endowment for the Arts Creative Writing fellowship. She has also taught at UCLA and the University of Tennessee.

Harjo is fully aware of the cultural and historical significance of her new position, as she told NPR's Lynn Neary in an interview. "It's such an honoring for Native people in this country, when we've been so disappeared and disregarded," Harjo said. "And yet we're the root cultures, over 500-something tribes and I don't know how many at first contact. But it's quite an honor... I bear that honor on behalf of the people and my ancestors. So that's really exciting for me."

Harjo's writing is often gritty and heavy and filled with ruminations on grief and nature. Her 1989 poem, "Don't Bother the Earth Spirit," excerpted below, exemplifies Harjo's tendency to combine Native history with nature symbolism:

"Don’t bother the earth spirit who lives here. She is working on a story. It is the oldest story in the world and it is delicate, changing. If she sees you watching she will invite you in for coffee, give you warm bread, and you will be obligated to stay and listen. But this is no ordinary story."

Harjo will become the 23rd Poet Laureate when she takes over from Tracy K. Smith, who has held the position since 2017, this fall.