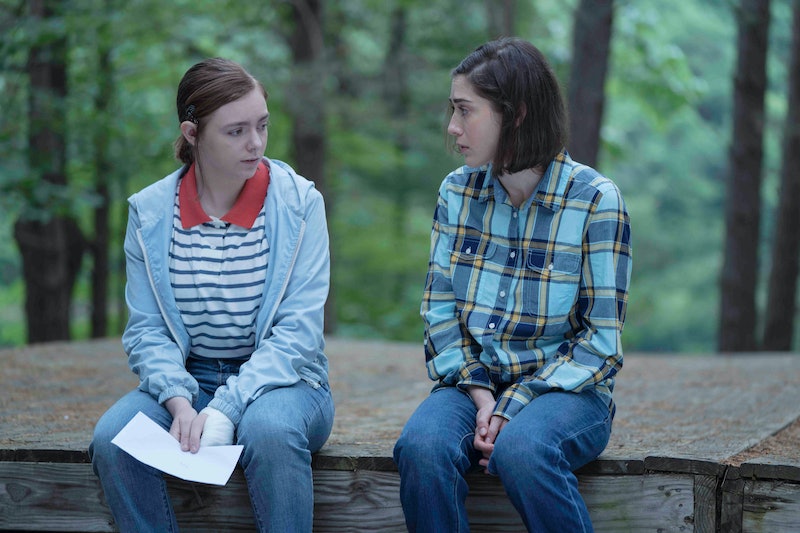 Spoilers ahead for the Dec. 11 finale of Castle Rock Season 2. Throughout Castle Rock's second season, Annie Wilkes (Lizzy Caplan) and her daughter Joy (Elsie Fisher) have been on a Sisyphean mission to find the Laughing Place. But fans of Misery know that Annie never mentions having a daughter, which means that Joy's fate in Castle Rock was sealed from the beginning. Sure enough, the teenage girl dies during the season finale in a truly full-circle moment that was foreshadowed back in Episode 5.

Though Joy and Annie have always had a fraught relationship — even before Annie realized Rita was her real mom — it's not until the two move into Marsten House that Joy's fate is set into motion. After Ace switches out Annie's medication (likely for placebo pills), she begins hearing her dead mother speaking to her, claiming that Joy is unclean and must be killed. Annie resists...until finally, she doesn't.

When Annie finds her daughter's sketch pad, which is filled with dark images, she becomes convinced that Joy is still possessed (which is certainly debatable) and decides to crush some Haldol (an antipsychotic) into a bowl of ice cream for Joy. Her daughter eats a few bites before asking what she put in it.

It's unclear whether the dosage was meant to kill Joy or merely prevent any visions she may have been having, but whatever the case, she runs outside and into the lake by the house they're staying at in Quebec. In the water, Annie finally follows through with what she started when her half sister was a baby and drowns Joy — in her mind baptizing her and cleansing her from any remaining impurity.

After she murders her, the nurse finds a goodbye letter letter from Joy, explaining why she has to leave. Realizing her terrible mistake, she tears outside again, crying hysterically, to give her daughter/half-sister CPR. Against all odds, Joy wakes up and doesn't remember how she got in the water, and everything goes back to normal.

However, it's not revealed that Joy is actually dead until the finale's closing moments. The two women, now impossibly happy, are at author Paul Sheldon's book signing, where he's reading from his novel Misery's Love. Ever since Annie found one of his books while on the road, she's become his number one fan. But a few things about the scene are off — like the fact that she sees several dead people in the crowd, including her mother and her father. Then a man comes up and asks if the seat next to her, where Joy is supposedly sitting, is taken.

When the camera zooms out, we see that the chair is actually empty and the whole thing is in Annie's imagination. It feels particularly tragic that someone as innocent as Joy ended up being the sacrificial lamb while Annie got off scot-free, but in this sense, Castle Rock stays true to its source material. There had to be something in Annie's past that set her down the path she arrived at when Misery begins: without family, consumed with Sheldon's work, and completely unhinged.