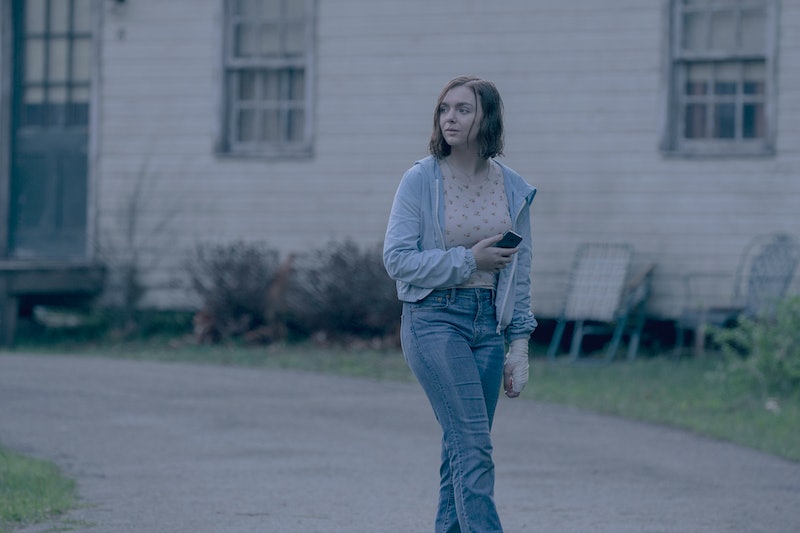 Spoilers ahead for Episode 5 of Castle Rock Season 2. Since the beginning of Castle Rock Season 2, Annie Wilkes has repeatedly deflected Joy's questions about who her dad is, why they're on the run, and where, exactly, they're headed to. But the Nov. 6 episode, told primarily in flashbacks, finally provides some background. And as the story of Annie's childhood slowly unfolds, it becomes increasingly obvious that her father and Joy's are one in the same.

Annie's "daughter," however, doesn't know any of this, and continues to inquire about her dad's identity. "The less you know, the safer you are," Annie responds, sounding eerily similar to her own overprotective mother. "He's a bad man." Of course, because this is Annie Wilkes, the truth isn't that black and white.

We learn in the extended flashback that because Annie, who grew up in Bakersfield, Ohio, has dyslexia, her parents decided to homeschool her. However, this mostly consisted of Annie digitizing pages from her father's (John Hoogenakker) book. He was a nice but clearly egotistical writer who craved positive feedback about his work. And yet, he was a good father. He called Annie his "number one fan" (a nod to Misery), and helped to balance out her mother's harsh tendencies.

Eventually, the Wilkes hired a tutor named Rita to help their daughter overcome her dyslexia. This was seemingly really helpful for Annie: her reading improved by leaps and bounds, and she began reading books that weren't her father's. However, as time went on, Rita became pregnant, and when Annie asked her who the father said, she said only that it was "complicated."

Everything changed irreparably when Annie's mother drove into a lake — with her daughter still in the passenger seat. Annie survived, but her mother died. Afterward, Rita and Annie's father explained that they'd been having an affair, and Rita's baby was Annie's half-sister. She didn't take it well, and pulled a knife on them.

Things continued to get worse after Rita moved into the Wilkes house. Annie was displaced into the attic, the newborn baby got all of the attention, and no one seemed to care that her life had changed forever. The final blow occurred when she read her father's now finished book, Ravening Angel, which he'd dedicated to Rita — his Laughing Place.

Annie confronted her father about it, and in a fit of rage, she kicked him down the attic stairs. What she hadn't accounted for were the railings, which he became impaled on. She then stabbed Rita and took the baby, who was then named Evangeline. As she was about to drown the baby, however, Evangeline began to laugh, and Annie decided to keep her.

In the episode's final moments, it's revealed that unbeknownst to Annie, Rita survived the stabbing, and present-day Joy looks her up on Facebook after reading her father's inscription. What this means is that it's only a matter of time before Joy realizes what exactly Annie is capable of — and that she isn't her mother after all.