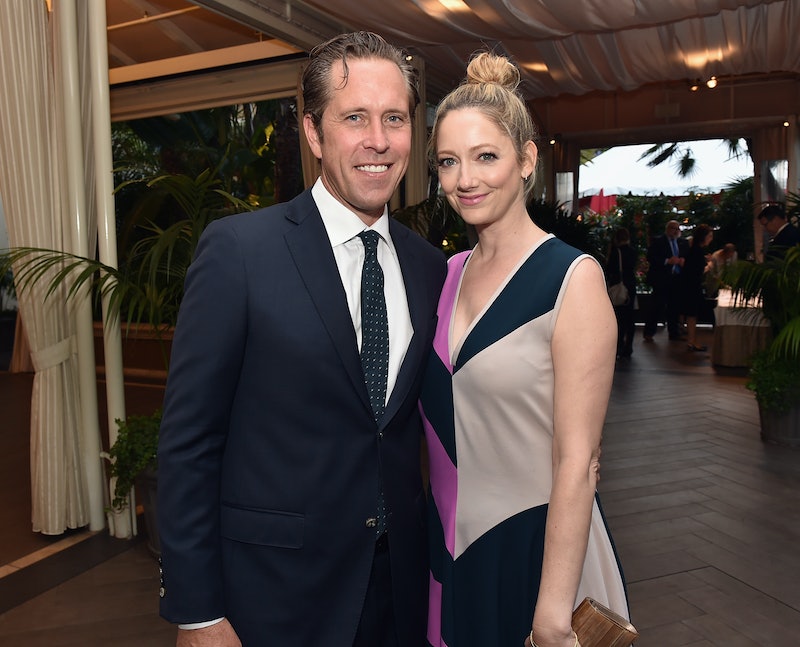 Judy Greer has built a career around stealing scenes in supporting roles. Her characters are rarely — if ever — the focus of a happily-ever-after romantic plot-line, but in real-life, she's been married for nearly a decade. Judy Greer's husband Dean E. Johnsen might not look familiar to most fans, but as it turns out, he's actually worked behind the scenes in Hollywood for quite some time. He's also been by Greer's side for quite some time, and it seems like they're a perfect match.

So, Johnsen —  who's been working as a producer on Real Time with Bill Maher since 2006 — and the Where'd You Go, Bernadette? star have kept their relationship pretty low-key from the start. According to E! News, they first connected back in 2010, when they were set up by friends on a blind date. They'd only been dating for about a year when Johnsen proposed during a trip to Napa, California, in June 2011, the outlet reported, and it sounds like Greer's engagement ring was perfectly unique in every way. "I didn't want a diamond and I wanted it gold," the actor revealed to E! at the time. "Dean said he picked this one because it reminded him of my eyes." Swoon.

They ended up tying the knot just a few months later in Los Angeles in December 2011, and a source told People that both Greer and Johnsen "looked amazing! The ceremony was filled with laughter amongst friends." The insider added, "Both the bride and groom seemed to have an amazing time celebrating the evening."

Seeing as how both Johnsen and Greer have worked in the entertainment industry for many years, it's no surprise that their nuptials included a star-studded guest list. As per People, Johnsen's boss Maher was there, as was Rashida Jones and some of Greer's former co-stars, such as Sarah Chalke and Jason Biggs (both of whom she appeared with on Mad Love). "Rashida, Sarah, and Jason danced to 'Bust a Move,'" the source told the outlet at the time. "Everyone looked like they were having a blast."

Despite the fact that they got married relatively quickly, though, the couple wouldn't actually end up moving in together for another seven years. How wild is that?

According to People, their perhaps unconventional living arrangement was all for family. Johnsen has two kids from a previous marriage, and he wanted to remain close to them until they got a little older. Greer's house was about 40 miles away from where they lived at the time, but she and Johnsen have since combined households, the actor told the magazine in September 2018.

"Our married life is a little weird," she joked to the outlet. "He had his house and I had mine. We spent our nights together back and forth."

Despite their unusual, initial living situation, everything has clearly worked out pretty well for the couple. "I married the right guy for me," Greer told People. "I think marriage is great. He’s the most supportive person I could’ve imagined if I’d Weird Science‘d a husband."

If a quick scroll through Greer's Instagram page is any indication, she's definitely found a perfect partner in Johnsen. They look *so* in love in every posted she's posted with her husband, and it seems like they'll undoubtedly have many more happy years together to come.

More like this
Pamela Anderson’s Dating & Marriage History Could Be Its Own TV Series
By Jake Viswanath
Vanessa Hudgens Is Reportedly Engaged To Cole Tucker
By Jake Viswanath
Keke Palmer Shares The Sex Of Her & Darius Jackson's Baby
By Jake Viswanath
12 Years Ago, Austin Butler Manifested His Oscar Nom In This Disney Movie Scene
By Jake Viswanath
Get Even More From Bustle — Sign Up For The Newsletter
From hair trends to relationship advice, our daily newsletter has everything you need to sound like a person who’s on TikTok, even if you aren’t.