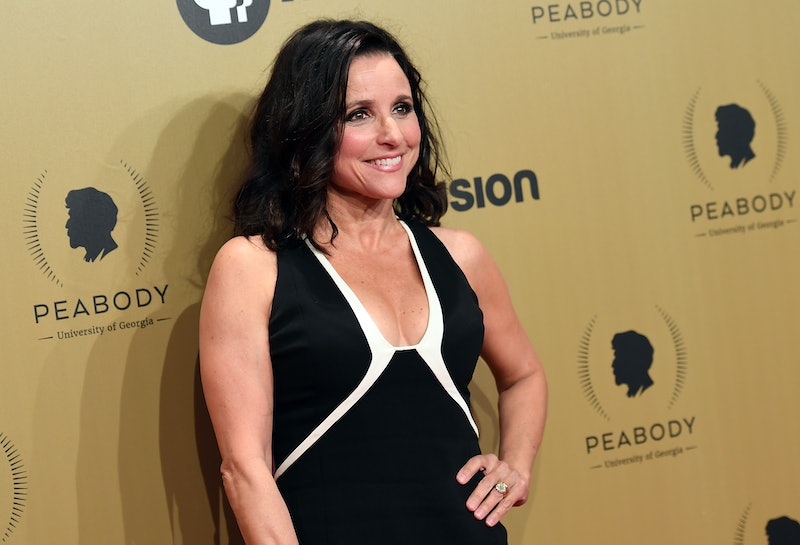 Just a few weeks after making history with her sixth consecutive Emmy win for Outstanding Lead Actress in a Comedy Series, Julia Louis-Dreyfus‏ has revealed that she has breast cancer in a note that she shared to social media on Thursday, Sept. 28. "1 in 8 women get breast cancer," it reads, "Today, I’m the one." Fans were quick to share their support for Louis-Dreyfus‏, with many of them sending messages that included animated GIFs of Louis-Dreyfus‏' most iconic moments so far.

The actor tweeted an image with the note announcing her diagnosis and a caption that said "Just when you thought..." In her message, Louis-Dreyfus‏ acknowledged that not all women are as lucky as she is to have support and medical care. The rest of the note reads,

"The good news is that I have the most glorious group of supportive and caring family and friends. The bad news is that not all women are so lucky, so let's fight all cancers and make universal health care a reality."

What an amazing way to use her platform, and the inventible attention her announcement would generate, to promote universal health care. But then that's no surprise to her fans, who already know what a selfless person Louis-Dreyfus‏ can be.

Variety reports that Louis-Dreyfus‏ discovered that she had breast cancer the day after her recent Emmy win, according to a statement from HBO.

Immediately after she posted her announcement, fans responded both on the thread and in separate tweets with their support for Louis-Dreyfus‏. "I'm just a fan, but a huge fan," one user said on Twitter with a GIF from Louis-Dreyfus‏'s Emmy award winning series Veep. "Hoping for speedy recovery and that you're surrounded by people as strong, supportive and giving as you!"

"I have literally never been less concerned about someone beating cancer than I am Julia Louis-Dreyfus," another fan said on Twitter.

Seriously, what has the world done to be worthy of a star like Louis-Dreyfus?

The most common GIF people have been sharing features the unforgettable moment when Seinfeld viewers got to see Louis-Dreyfus's character Elaine dancing. "And you will kick cancer's ass," another person tweeted at Louis-Dreyfus. ("Kick" because Elaine's dancing style included "little kicks," of course.)

Indeed, we are all rooting for Louis-Dreyfus.

So Many Iconic Seinfeld Moments

Definitely tell that cancer to "get out!"

Cheers To A Quick Recovery

Because a glass of wine isn't a bad idea.

Fellow actor and breast cancer survivor Christina Applegate also offered support to Louis-Dreyfus with a tweet saying, "Mama, find me. Let's talk if you want." Applegate, who's known for her roles in shows like Married with Children and Samantha Who, had a double mastectomy back in 2008, according to CNN.

At the time, Applegate said she had decided to publicly talk about her mastectomy to help raise awareness among women who might assume they're not at risk, and it seems like Louis-Dreyfus is attempting to do the same with her message promoting universal health care.

In winning six consecutive Emmy awards for her portrayal of Selina Meyer (former Vice President, or Veep, turned President) on HBO's wildly popular series Veep, Louis-Dreyfus now has the most Emmys won by a single performer for the same role. According to Variety, production on the final season of the show has already begun and scheduling will be adjusted so that Louis-Dreyfus can receive treatment.

HBO issued a statement to Variety offering support to Louis-Dreyfus that reads,

"Our love and support go out to Julia and her family at this time. We have every confidence she will get through this with her usual tenacity and undaunted spirit, and look forward to her return to health and to HBO for the final season of Veep."

Very well said. Not only is Louis-Dreyfus an incredibly talented actor and producer, but she seems like the type of person who rarely takes "no" for an answer. As fans on Twitter noted, Louis-Dreyfus is strong and beloved by many. Here's wishing her a speedy recovery!