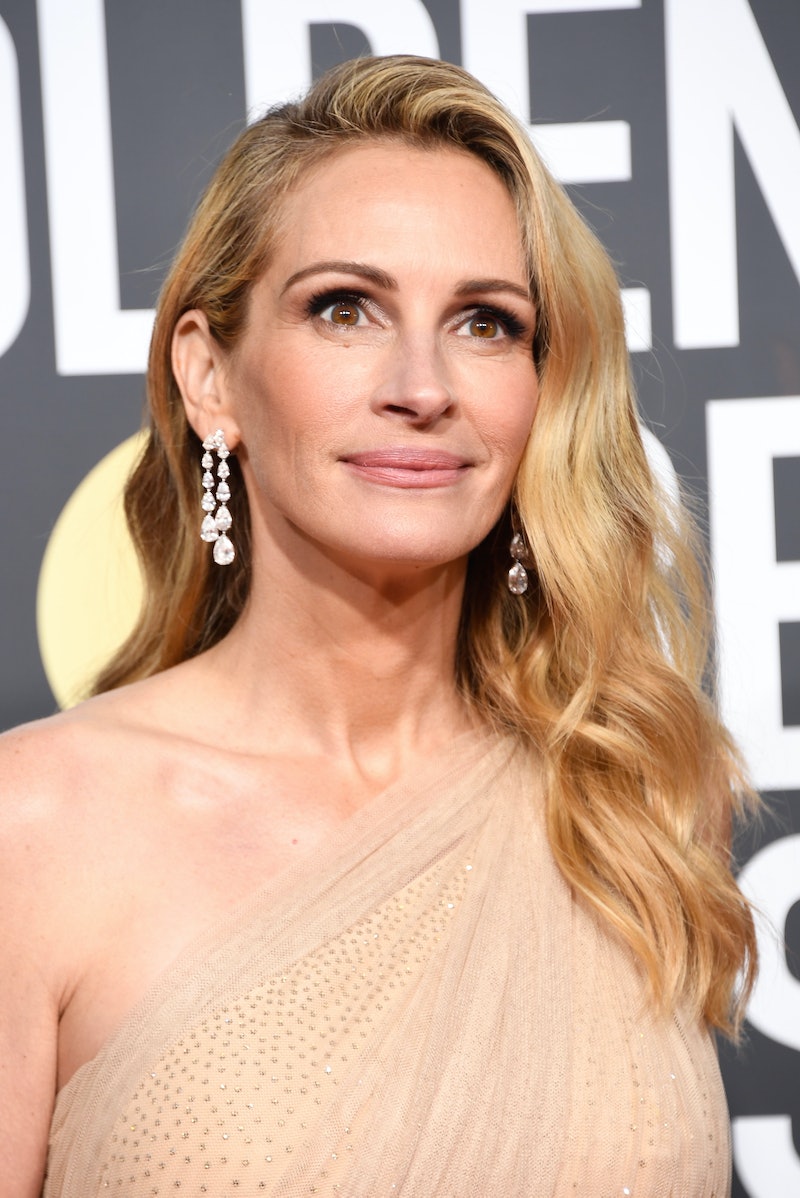 Up for Best Actress in a Drama TV Series for her performance in the Amazon Prime hit Homecoming, actress Julia Roberts' 2019 Golden Globes outfit was definitely one for the books. The mother-of-three opted for a stunning pale nude and black one-shoulder pantsuit from none other than Stella McCartney, with a tulle train to make her red carpet debut. The superstar also wore diamond earrings and a bracelet from Chopard to accessorize her look, all according to InStyle. Roberts opted to walk the red carpet in strappy, black pumps, and rocked soft makeup, with a nude lip for the night.

The actress' hair was styled in a loose waves, swept to one side as well, and she rocked a subtle manicure by celebrity nail artist, Mazz Hanna. "We wanted to keep her nails simple for the Golden Globes," Hanna said in a press release. "We went with a customized muted gold that's minimal but still eye-catching."

Homecoming marked the 51-year-old's small screen debut, which helped her to snag a nomination for Best Performance by an Actress in a Television Series — Drama. But while Roberts didn't end up taking home the coveted golden statue tonight, this was arguably still quite an exciting night for the actress!

While her critically-acclaimed role is a bit of a switch for the star, she seems to have enjoyed making television. "Everything is just so good, the bar is just so high, and for me it’s just nice to bring something into people’s homes," she told Variety in July 2018. "We’re like a delivery service — we’re delivering entertainment into your homes."

Homecoming was nominated for three awards in total at the 2019 Globes, including Best Television Series — Drama, and Roberts' co-star Stephan James was also up for Best Performance by an Actor in a TV Series.

Prior to tonight's show, Roberts was last nominated for Best Performance By An Actress in a Supporting Role back in 2014, for playing the character Barbara Weston in August: Osage County. The actress wore a form-fitting black and white Dolce & Gabbana button-up shirt gown to the awards that year, paired with a bedazzled belt, cinched around her waist, along with jewels from Harry Winston.

For hair, Roberts wore her trademark brown locks in a messy french twist with long, side-swept bangs. She also rocked a pair of Christian Louboutin pumps under her frock while on the red carpet. But according to E! News, later ditched the red bottoms to go barefoot as she exited the awards show — proving that while she may be an A-list star, the actress is totally relatable.

Back in 2017, the Pretty Woman star spoke briefly to W magazine about fashion, and admitted that while she loves appreciates good style, she doesn't "follow fashion per se."

"You have to wear what you like and not what you get talked into!" she exclaimed, while also revealing that wearing comfortable undergarments on the red carpet is essential. "It is like a cherry on a cake sometimes."

Still, with the 2019 Golden Globes being such a monumental night for the veteran actress, despite going home empty-handed, it was clear she certainly came dressed to impress.

More like this
Harry Styles’ Red Carpet Looks Have One Thing In Common
By El Hunt
Zendaya’s Sheer Valentino Look Won Paris Fashion Week
By Dominique Norman
Bella Hadid's Best Runway Looks From Paris, Milan, & More
By Allie Fasanella
Florence Pugh Wore A Sparkly Sheer Top at PFW & I’m Not Over It
By Allie Fasanella
Get Even More From Bustle — Sign Up For The Newsletter