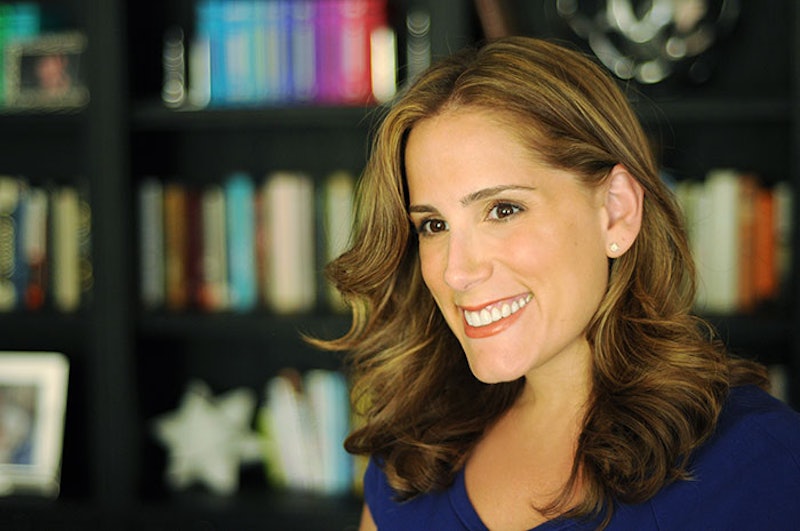 Julie Buxbaum has written her fair share of dead mothers. Her first three books — women's fiction novels The Opposite of Love and After You, and the YA novel Tell Me Three Things — all dealt with motherless daughters, and not by coincidence. Buxbaum, as you may have guessed, lost her own mom when she was just 14-years-old, and it's an experience that profoundly shaped her life and her writing career. But after three books on the subject, she made a promise to herself: no more dead moms. "I thought to myself: this is embarrassing. You have this issue you needed to explore. But you explored it from multiple angles," she tells Bustle. "Time to move on."

"So I sat down to write What To Say Next," she says. "And two pages in, I killed the dad."

In her new book, What To Say Next, out July 11, Kit Lowell is reeling with the unexpected loss of her father, who was killed in a car accident. Suddenly, high school just seems so... unimportant. And she can't even bring herself to sit at a lunch table with her two best friends, Annie and Violet, who seem to still think that jeans are a serious issue worthy of conversation. Instead, she retreats into herself and forges and unexpected friendship with school outsider David Drucker. But when David decides to help Kit discover the truth of her father's car accident, he risks stumbling upon a secret that could change their friendship forever.

For Buxbaum, writing about grief in high school is deeply personal. "[My mom's death] was such a formative experience for me, and it happened at such a formative time in my life," she says. "It does inform who I am in so many ways, as much as I wish it didn't."

In Kit's first chapter (the novel alternates between David's point of view and Kit's), the 16-year-old ruminates on how trivial it seems to be concerned about, well, basically anything,, in the wake of a life-altering tragedy.

"I just knew as soon as I can in and saw [Annie and Violet] huddled together talking and laughing and just being so normal, like nothing had changed at all—and yes, I realize that nothing has changed for them, that their families are no more or less screwed-up as the were before my life imploded—that I couldn't do it. Couldn't sit down, take out my turkey sandwich, and act like I was the same old reliable Kit."

This is an emotional state that Buxbaum remembers all too well — feeling utterly disconnected from the world because of this inescapable sense of grief, and simultaneously feeling a baffling sense of connectivity and a deep desire to participate in what is happening. "When I’m writing about the teen years, I want to give them that perspective," Buxbaum says. "It’s a very interesting kind of tunnel vision — an interesting balance between thinking, 'Oh my god I cannot believe these people are obsessing over junior prom.' And at the same time understanding, 'I, too, am obsessed with junior prom, and how can I hold these two conflicting ideas at the same time?'"

It's something Kit struggles with throughout the novel — especially as her feelings for David begin to deepen. How can she fall in love when her world is falling apart? It's a push-and-pull between sadness and joy, but with David's help, Kit is able to accept that all these emotions are valid. Being profoundly sad about her father's death doesn't mean she can't also be profoundly happy about falling in love for the first time.

When Kit sits at a different table in the cafeteria, she's simply looking for solitude — but instead she discovers a life-changing friendship with David, a loner who most people think is strange. In reality, David is autistic, and he is an extremely frank communicator who often has difficulty with social cues. Though Buxbaum, who is not autistic, was careful and thorough in her research, she's quick to remind readers that David is just one character, not a stand-in for every person with autism. "There's this saying that when you've met one person with autism, you've met one person with autism," she says. "And in What To Say Next, you meet David. He is not supposed to be anything larger than himself."

"The story I wanted to tell was about finding the person you need the most in the place you least expect to find it," Buxbaum says. "But also seeing below the surface, and finding a person, finding your person, which is such a delightful experience."