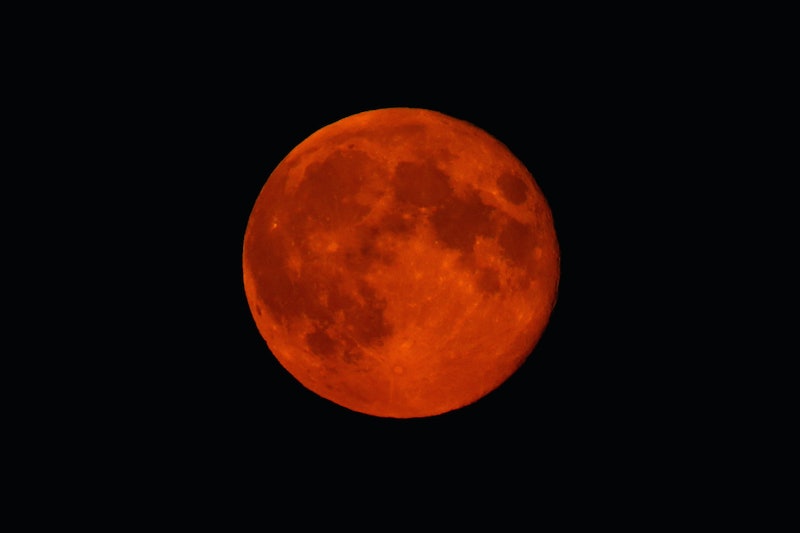 ICYMI, July 2018's full moon is a blood moon, which means it's also a full moon taking place during a total lunar eclipse. Pretty rare! But that's not the only reason July's full moon, which takes place Jul. 27, is rare — it'll also be rare because this lunar eclipse will be the longest lasting lunar eclipse in a century. As you can imagine, the combination of all of these lunar events in the midst of Leo's sun sign zodiac season is going to have some pretty intense effects on us. If you're wondering about July 2018's blood moon predictions, you're not alone. I think we're all pretty curious what kind of role the full moon is going to play in our lives on Jul. 27, when it slips behind a red-tinted cover.

Leo's vibrant vibes have us brought us out of our shells at this point in the summer and we're feeling pretty confident and energized. The concern that the total lunar eclipse is going to dim our glow and halt our momentum is real. So when the moon in Aquarius slips into the shadows, we're bound to feel some of the effects, right? According to astrologist Mecca Woods speaking with Bustle, even though we won't be able to see the lunar eclipse from North America, we'll certainly be able to feel its effects.

Woods explains, "eclipses in Aquarius can leave us feeling a bit shell-shocked or caught off guard because Aquarius is a sign that's known for being unconventional and unexpected." So if you're a fixed sign, aka, a sign that relies heavily on structure and stability like Taurus, Scorpio and Leo, you'll likely feel a bit more thrown off than others. "Lunar Eclipses are essentially turbo-charged full moons and full moons tend to bring things to a head or to a close." So if there's something that you've been ignoring, be it a relationship that's become unhealthy, or a work project that's outside of your passion or wheelhouse, that fact might become unbearably obvious during the eclipse.

Woods also says that eclipses like this can have the power to not just reveal or conceal, but to block things out of our lives in a more longterm sense. "Something may be 'eclipsed out' of our lives within the next six months but it's important to note that it will most likely be for the best." So if something that you thought was serving you starts to fade into the background, don't panic — perhaps it wasn't serving you as well as you thought it would. As much as an eclipse might sound destructive and stressful, it brings forward things that need to be addressed and helps push back things that don't need to be a part of our lives anymore. It acts as a kind of sorting hat that forces us to look at our lives and take stock of what should go and what should stay.

Speaking with Bustle, Certified Astrologer Diana Brownstone also shared tips about how to best behave during the lunar eclipse — because throwing engagements out the window and confronting problems under a sudden microscope might not be the best way to go about life. "Openly confronting issues in an aggressive way is sure to get an undesirable response," Brownstone tells Bustle, stressing the fact that we should remain calm and steady during this time of upheaval not only to protect ourselves, but others. "The irritation will be around issues with friends, family and the areas wherever the eclipse degree at five degrees Aquarius falls in your chart. If there ever is a time to hold back and be diplomatic, this is it," Brownstone adds.

So essentially we should mentally prepare ourselves now to be ready to pay attention to things in our lives we might not have given enough attention to, and equally ready to find an inner grace and confront complicated ideas and relationships with kindness and calmness. #Namaste.