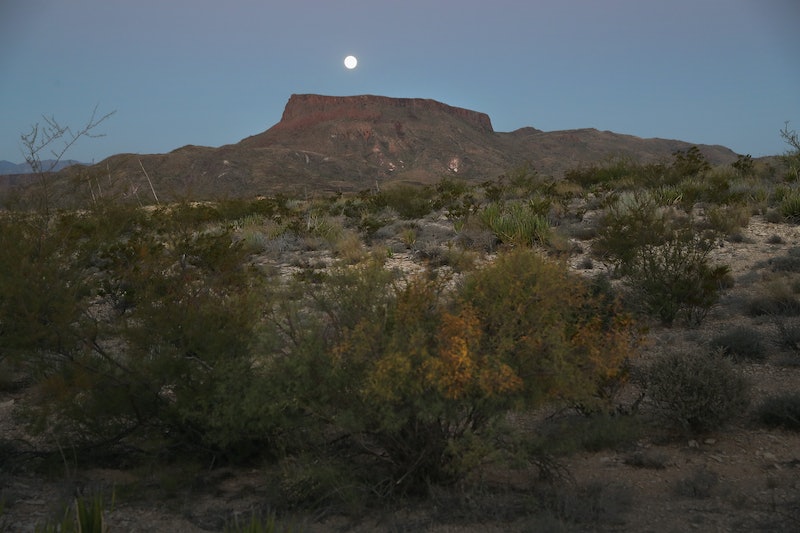 Many of us know about "super moons" — aka, a phenomenon that makes the moon appear to us Earthlings as much larger than normal. A super moon occurs when the moon is at the point in its orbit where it is closest to Earth, or "the perigee." But "micro moons"? That makes the moon look tiny, and it's due to "the apogee," aka the point when the center of moon is at a place in its orbit where it is farthest from the Earth. So, not only does the micro moon appear almost 15 percent smaller than a super moon, but it also appears duller — by about 30 percent, to be exact. If you observe the moon regularly, you'll notice a pretty significant difference between the sizes of the micro full moon, the standard full moon, and the super full moon.

The size of the moon in the night won't be the only thing that will be slightly different on Jul. 27, though: Considering the moon also affects the tides, super moons and micro moons also have a say over what sort of effect it has. For instance, when there's a super moon, the tides are stronger than usual — and when there's a micro moon, the tides are slightly weaker. The difference is really just a matter of a few inches — two to be specific — but it's still something worth noting because it's cool from a science perspective.

Additionally, this micro full moon is also a blood moon, meaning it's occurring during a total lunar eclipse, so it'll also appear to be slightly tinged red in the sky — a product of the Earth blocking the sun's light from shining directly onto the moon.

So on Fri. Jul. 27, when the moon rises in the sky at 4:20 p.m. EST, you might notice the moon's a bit smaller than usual, and a bit more reddish than usual. It certainly won't be too small to see, but with its illumination dimmed and its size smaller, you might not be able to get a good view of the sky around the moon after sunset. Then, you'll be able to see the slight differences in the moon.

If you needed any encouragement to step outside and make a point of observing the sky, after Jul. 27, we won't be treated with a micro full moon again until Sep. 14, 2019. Though we've seen micro full moons before, they're quite rare.

Because this year's micro full moon falls in July, it's considered a Buck Moon. The nickname was given to the moon by the Algonquin tribes as a reminder about what to expect from their deer population. Each year, the male deer, aka Bucks, shed their antlers. Come July, the antlers start to grow back. It will take the remainder of the summer for their antlers to grow back, but deers are more aggressive with antlers, so it was good for the people to be aware of when this process begins. July's full moon is also known as the Thunder Moon, because it typically falls during the stormiest time of the summer season. So don't forget to find the time to head outside and observe this rare and very symbolic event.