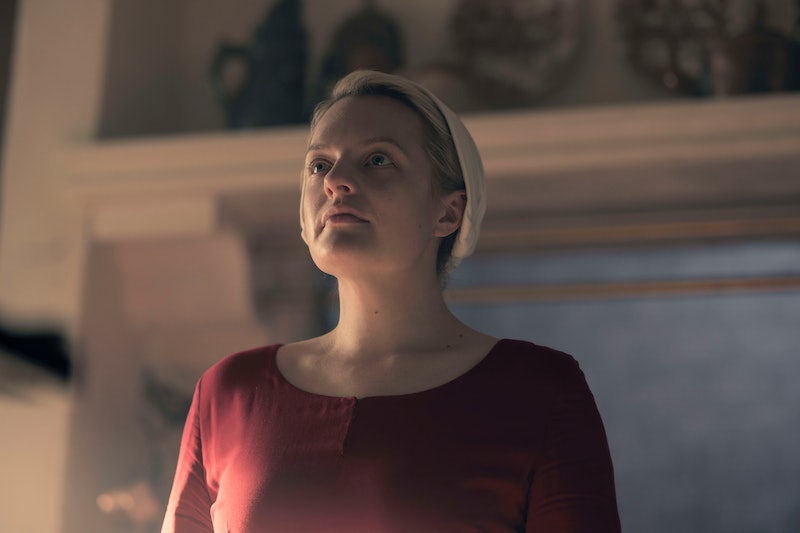 Commander Joseph Lawrence might not be looking for trouble, but that's what he's going to get with June. In The Handmaid's Tale Season 3 premiere, June (Elisabeth Moss) ends up back in Gilead, a mother on a mission to get daughter and take down the state, serving Lawrence (Bradley Whitford), the architect of it all, as his new handmaid. While the may seem like an unlikely pair, Elisabeth Moss tells Bustle that June and Commander Lawrence's relationship in Season 3 will challenge her in ways that she needs to lead this rebellion. And, she says, June might even help fans get closer to understanding just who Commander Lawrence really is.

"She can’t figure Lawrence out and it’s driving her crazy," Moss tells Bustle at Hulu's press junket in New York City before the first three episodes of The Handmaid's Tale Season 3 start streaming. "But he does something to her and challenges her in a way that she really needs because what she actually needs to use with him is her intellect."

Lawrence might drive fans wild too since he's hard to read not just episode to episode, but moment to moment. At once he seems as if he trusts June, allowing her to help women escape Gilead via his home, but he's also quick to remind her of the power he has to put her on the wall if he so chooses.

So is he June's ally or someone she needs to look out for? According to Moss, it doesn't matter. "What June realizes is she doesn’t need to like him and she doesn’t even need for him to be a good person, she just needs for him to be on her side in this one particular way."

Particularly, she needs him to respect her enough to share his secrets. Lawrence knows how to manipulate the men of Gilead to get what he wants and to succeed June will need to do that, too. "You don’t get to the position that he is in without having a pretty sophisticated political sense," Whitford tells Bustle, comparing him to Robert McNamara, a Secretary of State under Presidents John F. Kennedy and Lyndon B. Johnson, who played a major role in escalating the United States' involvement in the Vietnam War, but later apologized for his role in the war. "I think what’s happening with Lawrence is that his humanity’s peeking out, but it’s not a linear thread."

Commander Lawrence is often the smartest person in the room, but in Emily (Alexis Bledel) and June he sees two handmaids who are as savvy as he is without any of the power and it's affecting him in ways he's surprised by. "He’s hypnotized by their strength and bravery and I think it’s awakening something in him," Whitford says of June, who in some ways is like a "sentimental mother" to him. June and Lawrence's relationship is "not remotely romantic or sexual, but it’s stunningly intimate," Whitford says.

Specifically, through June he's starting to see how his wife has been affected by Gilead. "It's simultaneously moving and pathetic that his wife, who he adores, [her] brokenness is triggering some rethinking here," Whitford says, "That you can inflict that much pain but until it hits home, you can’t acknowledge it."

Despite being defensive of what Gilead has become, Whitford doesn't think Lawrence is necessarily sorry for what has happened there. "I think he has some contempt for the other commanders and the religious zealots," Whitford says, "but he sees this as chemo."

Commander Lawrence still believes he saved the world from something far worse, which is why he's not becoming a member of the resistance anytime soon even if he's beginning to acknowledge the horror that he has brought to these women. It's why Whitford says, "I honestly, do not know where he’s gonna land" when this season is all said and done.

Moss, however, thinks Lawrence may be the most important player in the resistance whether he realizes it or not. "There’s a kind of person that June needs to become in order to survive in this place and in order to lead this resistance," Moss says. "And Lawrence helps her become that person." Sorry commander, but here comes trouble.