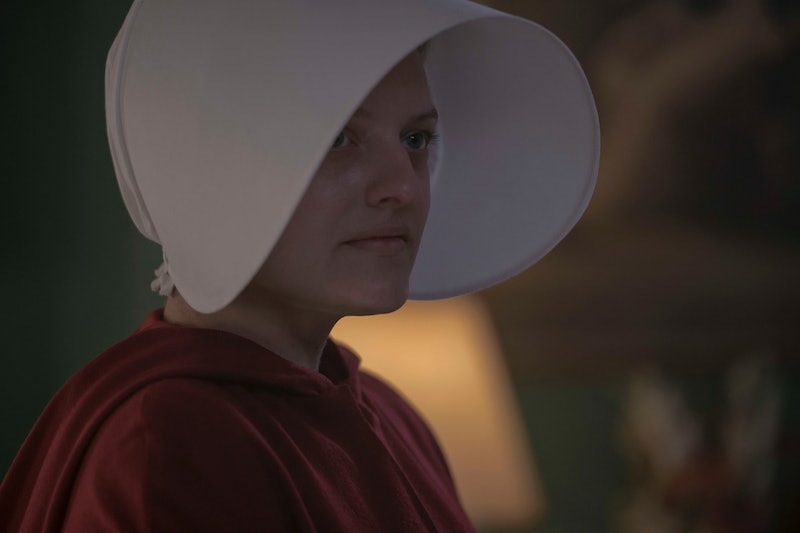 It's weird that The Handmaid's Tale Season 3 premiere is lowkey optimistic, right? The fight for freedom is sure to get ugly before long, but the Hulu series returns with more than a few triumphs for our heroes. Emily made it to Canada, and June becomes Commander Lawrence's handmaid in Season 3. Her new position on Handmaid's Tale allows her a little more liberties than she had at the Waterfords, given that he's also lowkey helping handmaid's escape Gilead. It's also, for West Wing fans, a reunion of sorts for Elizabeth Moss and Bradley Whitford.

After giving her baby to Emily, June demands to visit Hannah before returning to the Waterfords. June won't even look at or address Fred, she only talks to Serena, which is so subtly powerful. We've seen June get caught rebelling and sent back into the system in Gilead before — and there's a kind of relief in knowing that while she's not untouchable, she's not easily shocked in Season 3. She's willing to do whatever it takes to save Hannah, despite the consequences. She knows how to bend laws before they break, too, and who she can trust with things like taking her to see her daughter. Then, after Serena burns her house down, June gets the new post at the Lawrence household.

So now June is Ofjoseph. Is she safe? That's not entirely clear. There's a lot we still don't know about Commander Joseph Lawrence. He's neither a bad guy nor a good guy, given everything we know about him so far. He's a little of both. What's the deal with his wife? Why is she kept hidden upstairs, living out some kind of Jane Eyre and/or Southern Gothic fantasy in the heart of New England? If he created the economic "solution" known as the Colonies (which is essentially... slavery... so not that complicated) and feels any kind of guilt about it, will he help the Resistance? It's hard to tell whether or not he has any kind of interest in taking Gilead down from within, outside of the fact that he clearly respected Emily, helped her escape with Holly/Nicole, and berated June for not getting in the car. He's not not an enemy; and that's really all we can say.

At least we know for sure that Joseph has no interest in Gilead's ritual rape. He's not going to make June carry his child, or even attempt to get her pregnant by ceremonial force. That's a relief, for now at least. They both must know that this is only temporary. Sooner or later, an Aunt is going to come check on June, and if she isn't pregnant soon she will be moved somewhere else, which is how her handmaid "job" works in this dystopian society. Even Commander Lawrence may not have the clout to keep June at his house past that time limit.

Still, that gives June time to regroup in relative calm and safety — that is, if she's looking for calm or safety. It doesn't really seem like June is, right? If she still wants to rescue Hannah and get them both out of Gilead, she's not going to completely relax. And remaining calm isn't exactly easy when the Wall, where those executed are hung for public consumption, is still looming presence.

It also means that June is in a new part of town. It's a little more suburban, outside of the city formerly known as Boston, with new people to meet and learn about and a new chapter of Mayday to assist.

A lot can happen in three months. Hopefully better things than before.