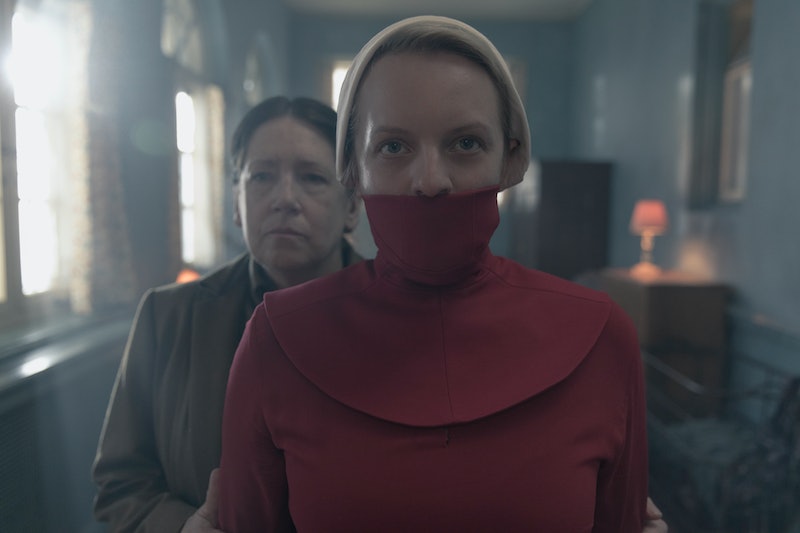 Spoilers ahead for The Handmaid's Tale Season 3 Episode 6. June went to Washington, and now, things will never be the same. For a show full of shocking moments, the visit to Washington, D.C. in The Handmaid's Tale''s Episode 6 might be the most horrifying of all. In it, June learns that the handmaids in Gilead's capitol, formerly the U.S.'s, are not only being muted by red face masks that match their uniform, but the handmaid's have had their mouths sutured shut with thick metal stitching to make sure they're never heard from again. "This experience in D.C. is a huge part of what pushes June into this back half of the season and where she goes," Elisabeth Moss tells Bustle at Hulu's press junket in New York City, "which is pretty extreme."

No surprise, Moss can't reveal how far June will go in the latter half of the season, but she says the visit to D.C. with the Waterfords to try and get Nichole back was a necessary step in her rebellion. "She needed to see how bad it was getting, to actually really see how much worse it could get," Moss says. "It's really important for her to know she doesn’t have much time."

In fact, June realizes she's been wasting her time fighting with Aunt Lydia (Ann Dowd), who is "pumped" to be in D.C. until she catches a glimpse of a mutilated handmaid. Now, Aunt Lydia certainly isn't against corporeal punishment. She's had no problem with flogging, eye gouging, or performing a clitorectomy on Emily (Alexis Bledel) because she's convinced herself that those punishments fit those crimes. But even Aunt Lydia has a code, and in brutally punishing women for just being women, D.C. has broken it. And in some ways broken her.

"[Aunt Lydia] cares deeply about her girls, as hard as that is to understand," Moss says. "She sees those masks and knows she doesn’t want that future. June doesn't either, for different reasons, but they’re sort of linked in that way."

The realization that, at least on this issue, they are on the same page is why June allows Aunt Lydia to strap her into the face mask before she takes to the steps of the Lincoln Memorial, which now features a decapitated Honest Abe who's been "destroyed for the glory of Gilead," a phrase Aunt Lydia uses to describe the somber renovations to the famous escalators at the Wheaton Station on the D.C. Metro, the longest in the Northern Hemisphere.

It could also very well be the excuse the commanders give if asked about the disfigured handmaids, too. "I think in a way when June sees how much bigger this problem is," Moss says, "and how much worse it could get, it’s like she’s realizing it’s not Lydia's fault."

This is not to say June forgives Aunt Lydia for making her life an absolute living hell for the last few years. It's more that she pities Aunt Lydia, who thought she had power, but is slowly realizing she's as neutered as every other woman in Gilead.

For Moss, strapping on that red mask is not for Aunt Lydia's benefit, but for June's. It's her fully radicalizing herself. No more battles, she is ready for the war. "June is going on to have a much bigger fight," Moss says, "and if Aunt Lydia got in her way, she’d destroy her immediately." Let's assume the same goes for anyone else who tries to stop her.