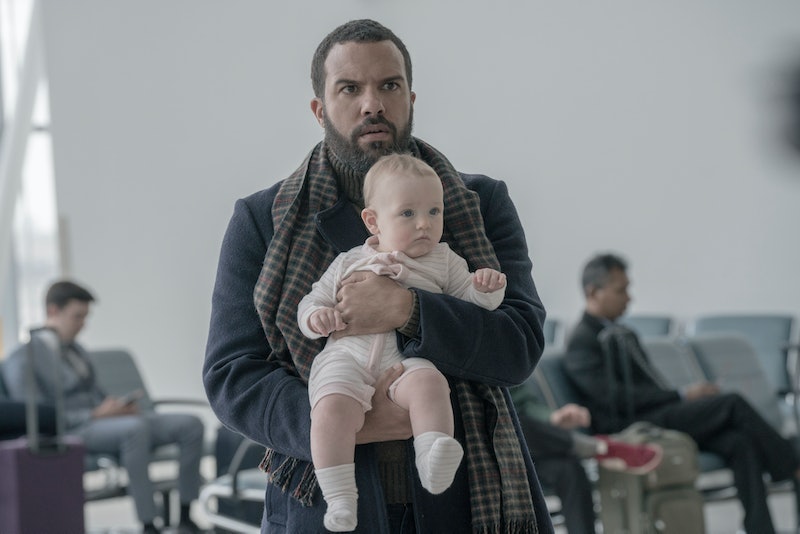 At the end of last week's Handmaid's Tale, June got a rare shred of reassurance that things were going to be OK for at least one of her daughters. The Waterfords were approached with information about Nichole, June's baby that she smuggled out of Gilead with Emily, and even saw video proof that Nichole is with Luke in Canada. The video was hugely important for June to see — now she knows her plan worked. But knowledge of June's whereabouts also complicates things, since the Waterfords could kill Luke to try and get Nicole back. Or at least hunt him down.

It's not immediately clear how much power the Waterfords would even have to reach Nichole and Luke in Canada through any violent means, but the trailer for this week's episode definitely shows that they're up to something. They want to arrange a visit with Nichole "to say goodbye" and ask June to help orchestrate a meeting with Luke. I'm not sure how much I trust that they won't try and pull off some ambush to capture or kill Luke and take the baby back, but so long as they're meeting in Canada, hopefully he has more rights than in Gilead.

Thus far, the show has treated an escape to the north as the end-all-be-all of safety, and the risk of being killed or dragged back has seemed pretty miniscule. But even if the "visit" with Luke and Nichole goes smoothly, there's still the worry that the Waterfords might take other routes to get Nichole back to Gilead.

Even though controversy swirls around him a bit these days, Fred is still high up in Gilead's government, and foreign diplomats have visited with him before. We don't know much about the specific details of international relations between Gilead and Canada, but he could certainly contact their representatives and tell them that his biological child has been kidnapped. Now that he's been informed where Nichole is and who is caring for her, Fred would have all the information he needs for authorities to locate her.

Of course, that brings up a tricky issue of its own. If Fred did have a legal claim to Nichole as her biological father, there would potentially be some kind of paternity test involved to ensure he was telling the truth. And while no one is 100 percent certain, the common assumption is that Nick, not Fred, is the real father of June's baby.

If Fred is proven not to be the biological father of Nichole, that would likely keep the baby safe in Canada with Luke, but would probably put an unsavory spotlight back on June. She might be punished for having an affair, or even sent away to the colonies given the trouble she's caused in the past, unless the enigmatic Commander Lawrence manages to pull some strings.

But all hope is not lost — Serena and Fred seem to know that the baby's paternity is not what they claim it to be, so it's unclear if they'd even move forward with a test involved. Serena, deep down, also doesn't really act like she wants Nichole in Gilead, despite her heartbreak over losing her. She knows women can't flourish there, so she might discourage any attempt at Nicole's return.

Plus, Luke might even be able to claim asylum status on Nichole's behalf given her persecuted status as a girl in Gilead. The rest of the world doesn't appear to have a positive view of Gilead's system, so he'd probably have no shortage of legal help with that.

We simply don't know enough about the political relationship between Canada and Gilead, or about the laws of asylum as they relate to fleeing refugees from the south, to know for sure what will happen with Nichole and the Waterfords.

One of the best parts of this season thus far, though, is that it's been giving viewers little wins amidst the bleakness — so far we've witnessed Emily's reunion with her son and her wife, Nichole's speedy arrival to Luke and Moira, and June's growing power over the Waterfords. Nichole's return to Gilead, or Luke's untimely death, would both deal a devastating blow to the progress that's been made the past few episodes, and send us further into the feeling of futility that tends to drag the story down.