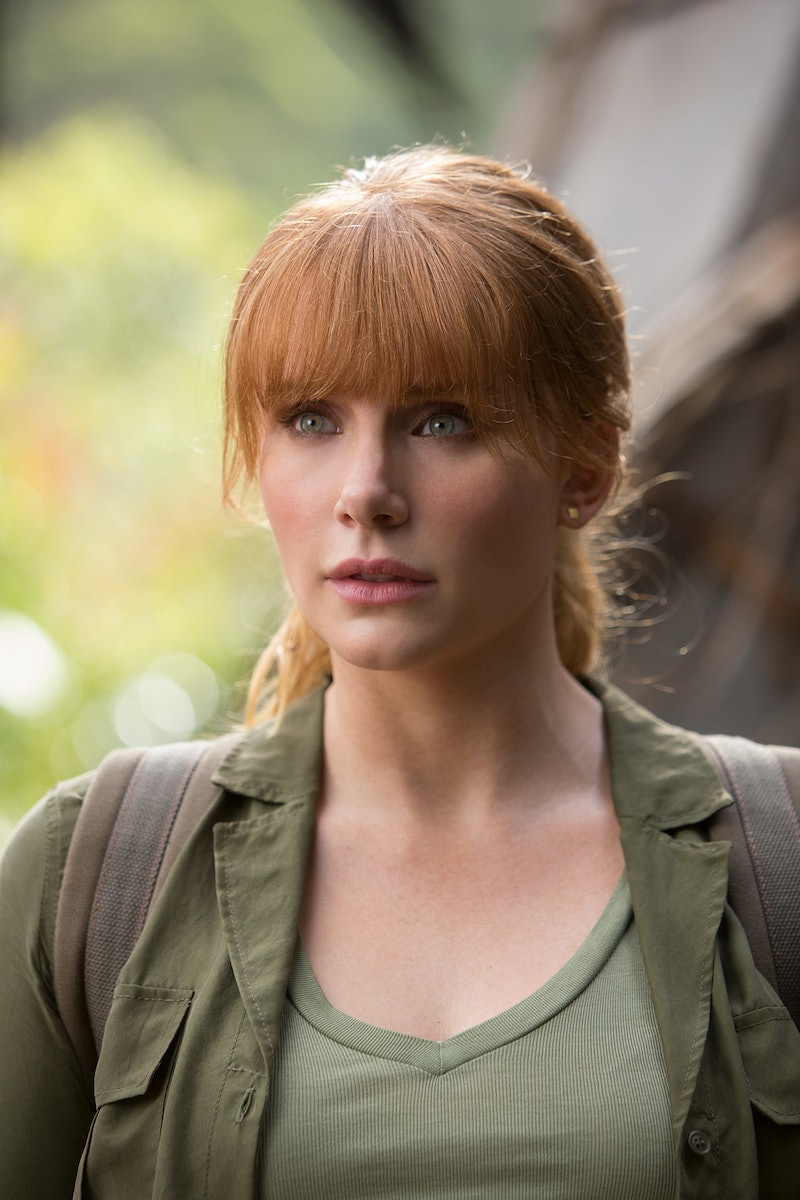 You'd think that when literally all anyone can seem to talk about is the choice of footwear you wore one time in that one movie in that one situation, any woman would be frustrated. But Jurassic World 2 star Bryce Dallas Howard is very down to still be talking about her Jurassic World high heels — you know, the ones that the internet deemed an "unrealistic" choice in a movie that features dinosaurs birthed back into the world through the wonders of science fiction.

"I mean it’s fascinating to me that it’s become such a talking point... it was certainly unexpected, but it’s not something at all that bores me at this point," says Howard a few days before the June 22 release of Jurassic World: Fallen Kingdom, a movie in which she (gasp!) wears heels once again. "These movies are meant to be really grounded and the only leap is meant to be the scientific leap of what if human beings and the dinosaurs coexisted... I think that maybe the heels seemed a little bit of a leap," she adds with a sarcastic laugh.

You know what's not a leap? The very real consequences of Howard's character Claire's other decision in the first World: ditching the heels and running through the jungle and park shoeless. "I mean, tetanus much? Like in real life, I get tetanus," says Howard, with a chuckle.

And yet, here we are, three years after Jurassic World's premiere, still talking about these damn shoes. But Howard says that while the unending nature of the shoe-troversy is probably just a "bi-product" of doing press for the sequel, she can handle it. "I was raised by an individual who is in his mid-60s now and he continues to be referred to as 'Opie,' so if he’s not tired of that then I’m not tired of talking about heels," she says with a laugh, referring to her father, director Ron Howard. In fact, here's how not tired Bryce is: She asked to wear heels in the sequel.

"I mean I fought to wear heels in this movie and ensure that we were tracking my footwear as kind of religiously as we were tracking the science. And I think that it’s become an element, a metaphor for my character and her journey, so I’m super down," she says of Claire, who lest you forget, started out the first film with what amounts to an office job.

In the new movie, our gal manages to find some proper footwear (leather adventuring boots that Indiana Jones would approve of, naturally) before galavanting off to save the dinosaurs on Isla Nubar. But once the journey gets going, Claire gets to do something that Howard hopes will change how fans remember her character: an unprecedented moment in which she literally rides on the back of a T-Rex.

"That’s something I think I’m looking forward to," Howard says. "[The conversation] can shift from 'I’m the lady with the high heels' to 'I’m the lady that rode on the back of the T-Rex.' I like that narrative."

Fallen Kingdom also delves into the hallmark of sci-fi: unanswerable questions about what decision is best when life, uh, finds a way. When Isla Nublar is destroyed and the dinos are put in danger, the world's leaders scramble to figure out how to treat the creatures science created: do we let them die, or save them? Do they have rights, since they weren't made by nature? Claire finds herself defending these animals fiercely (while Jeff Golblum's Ian Malcolm shows up for 30 seconds to serve up a counter argument) but the film doesn't necessarily take the deepest of dives into these complex waters. Still, it delivers one major truth — that in a debate that difficult, there is often no right answer.

"At every turn there are consequences for our actions and I think the thing that the movie does very well is that it shows that there are definitely no correct answers when these decisions are being made because of greed," says Howard. "Greed is the ultimate villain and whenever we can make a choice that comes from our humanity, even though there may be consequences, that is the right choice. But if we are making choices based on greed, then that choice is likely wrong every single time."

It's an oddly relevant flair to what most viewers might assume is an average popcorn flick. But going above and beyond with her projects is the norm for Howard. Once Fallen Kingdom rolls out of theaters, the actor will be shifting her focus away from on-screen roles to working behind the camera. Next up is a film she's directing for Netflix, an adaptation of Sort of Like A Rockstar (a book by the author of The Silver Linings Playbook). "I’m not quitting acting, I’m shifting to directing full time," Howard says, adding that it was actually Jurassic World director and writer Colin Trevorrow who encouraged her to make the move.

She's got a few other projects in the directing pipeline — all of which she declines to announce just yet — and she'll be back for Jurassic World 3, in which she hopes (just like the rest of us) that Laura Dern's Ellie Sattler might make a return to the franchise. ("I just wanna be friends with Laura Dern," Howard jokes as the entire internet yells, "SAME.")

So let's check back in for a moment: you still worried about her heels?