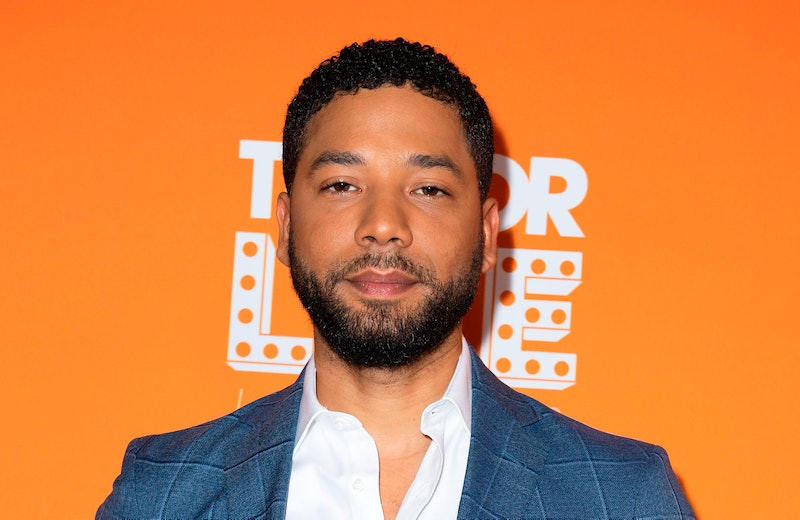 On Tuesday, a special prosecutor in Chicago indicted former Empire star Jussie Smollett after an investigation into the actor’s previous hate crime allegations. Smollett has been indicted on six counts of disorderly conduct by a Cook County grand jury for allegedly making false reports about being the victim of a hate crime last year, according to the Chicago Tribune. The newspaper added that special prosecutor Dan Webb said “further prosecution of Jussie Smollett is in the interest of justice."

In his indictment announcement on Tuesday, Webb cited the “extensive nature of Mr. Smollett’s false police reports” and “the resources expended by the Chicago Police Department to investigate these false reports." However, Tina Glandian, Smollett's attorney, believes the decision "raises serious questions about the integrity of the investigation that led to the renewed charges against Mr. Smollett." In a statement provided to Bustle, she added:

After more than five months of investigation, the Office of the Special Prosecutor has not found any evidence of wrongdoing whatsoever related to the dismissal of the charges against Mr. Smollett. Rather, the charges were appropriately dismissed the first time because they were not supported by the evidence. The attempt to re-prosecute Mr. Smollett one year later on the eve of the Cook County State's Attorney election is clearly all about politics not justice.

Over a year ago in January 2019, Smollett, an openly gay Black man, told police that he was the victim of a homophobic and racist hate crime and alleged that two men attacked him near his Chicago home. A month later, however, Smollett was arrested for allegedly filing a false police report. The actor plead not guilty to the charges in March 2019. While initially charged with 16 felony counts that alleged he faked and staged the attacks, Smollett’s charges were dropped by the Cook County State's Attorney's Office that month.

His lawyers said in a statement to BuzzFeed News at the time, “Today, all criminal charges against Jussie Smollett were dropped and his record has been wiped clean of the filing of this tragic complaint against him. Jussie was attacked by two people he was unable to identify on January 29th."

On Feb. 14, 2019, Smollett appeared in his first televised interview since the alleged attack and recounted the details to Good Morning America’s Robin Roberts. “Like, you know, at first it was the thing of like, listen, if I tell the truth, then that's it because it's the truth,” Smollett said of the naysayers of his allegations. “Then it became a thing of, like, how can you doubt that? How can you not believe that? It's the truth."

A few months after Smollett’s initial charges were dropped, his Empire character Jamal Lyon had been written out of the final episodes of Season 5 of the Fox TV show. Fox Entertainment and 20th Century Fox TV issued a joint statement in April 2019 that read, “By mutual agreement, the studio has negotiated an extension to Jussie Smollett's option for season six, but at this time there are no plans for the character of Jamal to return to Empire."

More like this
A New Netflix Doc Will Explore The Unsolved Murder Of Jill Dando
By Sam Ramsden
This First Look At 'The Gold' Shows Jack Lowden In A Whole New Light
By El Hunt and Sam Ramsden
15 Photos Of 'The Last Of Us' Star Pedro Pascal That Cement His Zaddy Status
By Radhika Menon
Who Is Murray Bartlett Dating? 'The Last Of Us' Star Is Extremely Private
By Alyssa Lapid
Get Even More From Bustle — Sign Up For The Newsletter
From hair trends to relationship advice, our daily newsletter has everything you need to sound like a person who’s on TikTok, even if you aren’t.

This article was originally published on Feb. 12, 2020