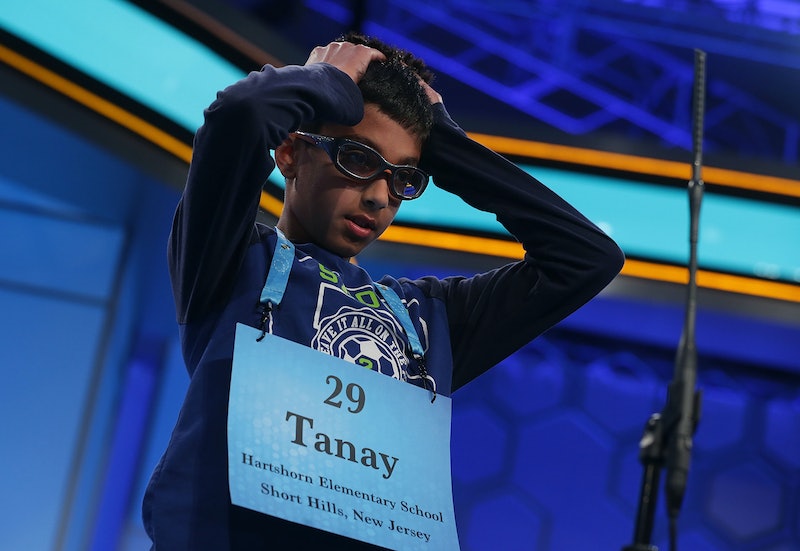 As the 90th Annual Scripps National Spelling Bee has us all in touch with our inner spellers, the less-gifted (but still enthusiastic) logophiles of the world have to reckon with the fact that they never made it to that glorious ESPN stage. But rather than bemoaning how you "could've been a contender," you can feel better knowing that you're in good company by checking out America's most misspelled words in each state.

Not everyone is able to flawlessly spell out "elucubrate" or "xanthosis" under the hot lights on the big stage to win $40K with the pressure on. In fact, most people aren't on that level. Obviously a lack of spelling skills absolutely doesn't make a person dumb — there's probably just some wacky brain witchcraft involved — but the shared mistakes are fun to look at. Based on data gathered by GoogleTrends on Tuesday, using top "how to spell ... " searches in each state, there's plenty of not-quite $10 words that Americans can't seem to get right.

While some states like West Virginia and Connecticut have mouthfuls like "Supercalifragilisticexpialidocious," others have more grimace-inducing ones like South Dakota's struggle with spelling the word "college" or New Hampshire's battle with "diarrhea."

Because no one is immune to typos and life's all about learning, the OG map published on GoogleTrends Twitter had some mistakes of their own: At first, they spelled D.C.'s word (ninety) as "nintey."

Among the other notable oopsies are people in Idaho wondering how to spell "quote," New Mexico's bananas issue with the word "bananas" (Gwen Stefani much?), and Coloradans having some problems with "tomorrow." Meanwhile folks in New York, California, Minnesota, Ohio, and Kentucky all manage to misspell "beautiful" the most. One can only hope that Spelling Bee Pronouncer/High Wizard of Words Jacques Bailly is chuckling softly at us mortals somewhere between practicing tongue twisters in the mirror.

Meanwhile other words on the list don't really seem all that embarrassing: like the Georgians grappling with "gray" (vs "grey," most likely) or South Carolina and Arkansas's problems with the word "chihuahua" — which also seems fair since one might expect a "w" to show up in there somewhere. Though it's more intriguing to me how frequently people are writing about chihuahuas to begin with in those states (what's good SC and AK?).

And, as for you, Wisconsinites who can't seem to nail the name of your own state? Don't let the world change you.