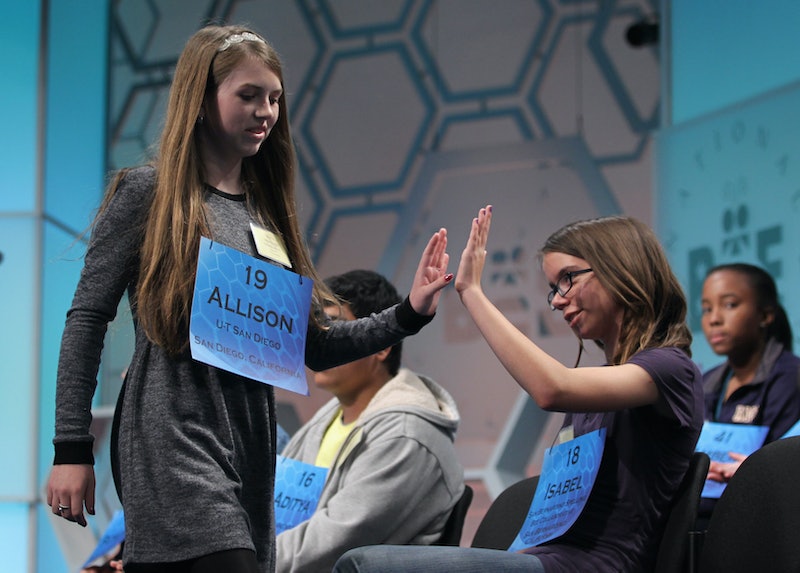 In addition to being a social media nightmare for people who share my surname and a joy for English teachers and pedants everywhere, the return of National Spelling Bee season is the one time of year where competitive spellers are given the recognition they deserve on ESPN. Among these lesser-known logophiles is the National Spelling Bee's longtime pronouncer, the intimidating and inspiring duke of diction himself: Jacque Bailly. But who is Jacques Bailly and, seriously, why can't you change the channel?

Bailly is the man with all the words, tasked with perfectly pronouncing each word on the list (as they appear in Merriam-Webster Unabridged). And the pressure is on, as saying each word — from "Chiaroscurist" to "Ursprache" to "Appoggiatura" — just right plays a huge part in determining which spellers win big and which ones go home.

In addition to being a professor of classics at University of Vermont, Bailly has some National Spelling Bee glory days of his own. After serving 15 steadfast years as pronouncer (after 12 years as an associate pronouncer), it almost seems fitting that Bailly won his 1980 national champion title with the word "elucubrate" — which means "to produce (a written work) by working long and diligently."

In addition to his skillful delivery of ten-dollar words that range from polysyllabic mouthfuls to nightmarish SAT verbal head-scratchers and his brief stint as a movie star (playing himself in Akeelah and the Bee in 2006), it helps that Bailly just seems like the coolest, most zen dude one could imagine to hold this post as High Wizard of Word Nerds.

In a 2015 interview with The Denver Post, Bailly waxed poetic on the nature of the high-profile spelling competition and managed to make it sound (for lack of a better word) epic. When discussing the competition (and not-so-lowkey the Sisyphean struggle of being a human, but NDB) Bailly said:

[The bee] is a special triumph, it’s a pinnacle of achievement that’s wonderful to see. It’s all about the human effort to excel and to show the excellence of knowledge...This is the big carrot that leads people to try and climb this mountain — but the mountain is what matters. Not the top.

Try not to swoon too hard, sapiosexuals. Because it gets even better. Bailly further acknowledged that the real thrill of the spelling bee goes beyond the pomp and circumstance and ESPN coverage to the young participants and their earnest desire to grown and learn:

We’re here for a very short time, we know so very little. This is part of going beyond our humble, primate beings. I believe we’re here to be as good as we can possibly be.

If anyone is able to resist the urge to get existentially weird and deeply invested in the final throes of the 90th annual Scripps National Spelling Bee after reading all that, I am calling you out.