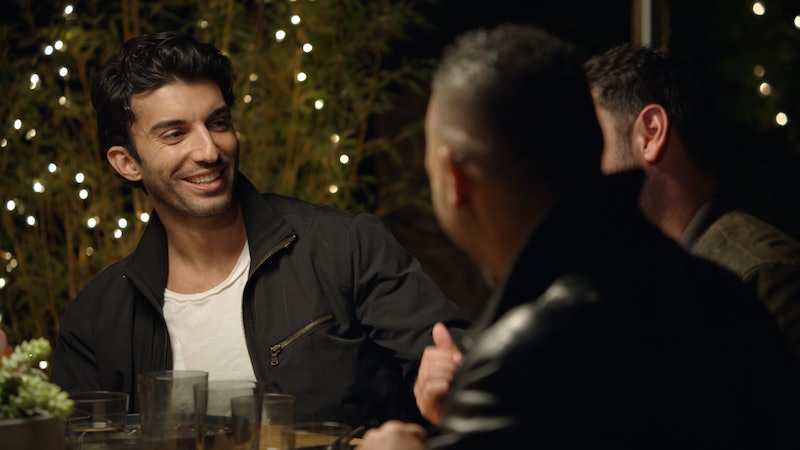 Chances are you recognize Justin Baldoni as Rafael on The CW's Jane The Virgin, or from his recently resurfaced Suite Life of Zack & Cody cameo. Or maybe you watched his TED Talk about masculinity. But if you're not familiar with his round-table talk show called Man Enough, the latest episode is worth a watch. Baldoni's Man Enough tackles the #MeToo movement in its new episode released on Tuesday, July 24 via Facebook. It features a candid conversation among men about how to be better allies when it comes to preventing sexual assault, but also supporting survivors.

Reflecting on the resurgence of the #MeToo movement last fall, Baldoni recently tells Bustle over the phone, "Most of us men realized that almost every woman in our life had a #MeToo story and it was like a wake-up call... The men that I knew had no idea what to say, how to be helpful." He continues, "What I do when I don't know something is I try to find someone way smarter than me, who has experience, and who can teach me. And that's really what this was all about."

This perfectly explains why he's quick to pass the figurative mic to Tony Porter, the CEO and co-founder of A Call To Men, which aims to create "healthy and respectful manhood," while working to end violence against women and girls. Porter, who works as an activist and educator, is featured in the latest Man Enough episode and joins in our phone call about it.

That very message, of listening to those who know more, is a recurring theme throughout the episode, as well as this interview. During the hour-long installment of the web series, Baldoni and Porter are joined by actor Matt McGorry (How To Get Away With Murder), music manager Scooter Braun (known for working with Ariana Grande and Justin Bieber), Lewis Howes (former professional football player and best-selling author), and Jamey Heath (a close friend to Baldoni, who explains Heath is a "a bullsh*t detector, so I have to be my 100 percent, authentic, sincere self when I'm around him.")

"Together, we just felt like this was a really strong group of men, whose opinions wouldn't always match, but we really believe, it's through that spark of differing opinions, that's where truth is found," Baldoni explains. "We're just really, really grateful that these men were willing to jump in to the cold water of this conversation... Because it is scary. You can say the wrong thing. You can be misunderstood."

During the episode, they tackle everything from the danger in being bystanders to what they can actually do to help. Additionally, two of the men at the table open up about their own experiences surviving sexual assault. As Porter explains, one in six men are victims of sexual violence, often before the age of 18.

One of the most powerful things about this Man Enough episode is the structure. Interspersed throughout are clips of women — Karen Alston, an entrepreneur; Yazmin Watkins, a spoken word poet and actor; and Alma Gonzalez, a clinical social worker — sharing their stories. Explaining why he included these women, Baldoni says, "There are so many women who have bravely come forward to share their stories and we just wanted to include a small sample of them. We also know that women of color are much more likely to experience sexual harassment and assault, specifically trans women of color."

Supporting that fact, Porter adds, "Violence against women of color, financially poor women, tribal women, trans women, women of the LGBTQ community, gender nonconforming women, those rates of violence are higher. And it's important for us to understand that."

As mentioned, understanding involves listening. It's why these clips are separate from the dinner table discussion; because they wanted the men to listen, not interject. Of the women's stories — and really, any woman's — Porter says, "You can't define their experience. They define their experience, and then you look at yourself as part of the dominating group, and begin to become part of the solution... By having women in the episode, it really demonstrated their leadership, the importance of their voice, and that we're in this together."

Having open conversations is what leads to change in Porter's expert opinion. "When you take a vision like Justin's and sit men around a table to have a conversation around what it means to be a healthy man, it's unique, it's groundbreaking, and that is exactly what we need," he explains. "We have to increase healthy manhood if we want to decrease violence against women and girls."

As for Baldoni, hearing these stories really struck him, especially the sit-down he had with Professor Susan Brison featured in the episode, where she recalled her own horrific sexual assault. The actor reflects, "Getting the opportunity to sit down and look at her in the eye and just shut up and listen, that really, really affected me deeply." And he wants others to have that experience too.

"I really do hope if there's a man reading this [interview], that if he does know somebody who has been a victim of sexual assault or violence, that maybe he at some point can sit down and listen to that story and allow it to just permeate his heart," Baldoni says. "Because I really believe it will change things."

And that's the point — Baldoni sincerely wants to spark change. "It was in an effort to create a conversation that I could feel that we were just starving for," he explains. A conversation where men can "collectively learn from each other, from experts, and hear firsthand from women and try to figure out how we can be better allies in our responses and in our actions."

Similarly, the other men at the table had nothing but positive reactions. "I am truly honored to be a part of this show both on-camera and as a producer," McGorry tells Bustle in an email. "This episode, in particular, is of great importance, and I can honestly say that it is one of the pieces of work that I am proudest to have been a part of in my career. My hope is that this episode is the beginning of that conversation for many men."

Meanwhile, Braun posted on his Instagram about what filming the episode meant to him with a lengthy, heartfelt caption. He wrote the episode was for all the "women in my life who have made me better. But it is also for all you guys. If you call yourself a man then you will show equal... EQUAL respect for a woman."

So, how do men — and people in general — do better? Porter explains during our call, "We have to begin the process of calling men in. We've called us out — it's not them, it's us... And it's not just about calling out the men that were called out by name. It's about calling out men, period."

Making a distinction, he continues, "Now that that's happened, we have to call men in. Because we are still at a place where, in a male-dominated society, unless men are not part of the solution, we cannot end violence against women and girls."

And when women do speak out, what happens next matters, too. "It's really about us lifting up our voices and honoring what women say and honoring their experiences," Porter says. "And believing what they're sharing, unless we have a reason not to believe. Don't start from the place that you've got to prove it first."

While there's plenty to take away from the episode, there's something you won't see on camera: the four hours afterward where the men and women of the cast and crew sat around, continuing that conversation.

"We have years and years and years of repressed feelings and thoughts we haven't been able to share because we've been worried about having our feelings being used against us," Baldoni says. "The door just bursts open, and suddenly you have these men that are open and honest and sharing these incredible things. And you wouldn't believe the conversation."

"As men we are sensitive, we are emotional. And we are very good at sharing when that space is created," he concludes. And it sounds like he's doing everything he can to ensure that continues — starting with this very series.