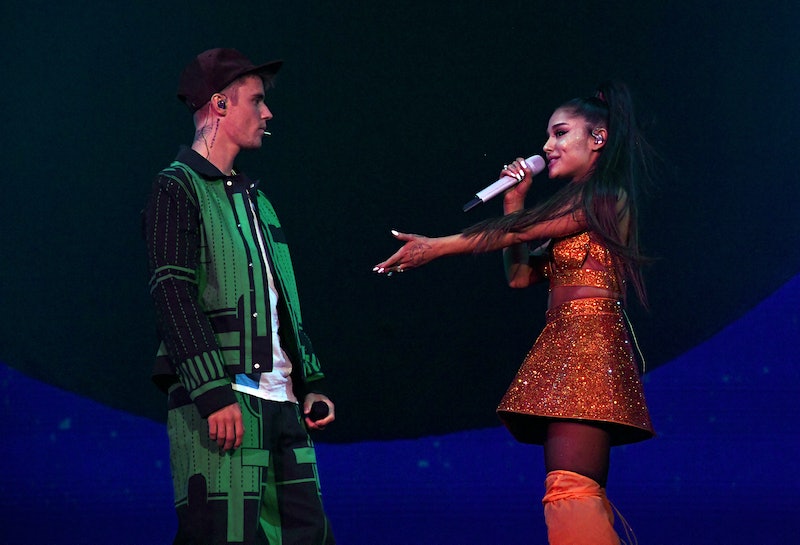 This year, Coachella has been full of surprises, and the second weekend of the festival was no different — especially for those attending the set of a certain "7 Rings" singer. On Sunday night, Ariana Grande brought out Justin Bieber at Coachella as a special guest during her performance, marking what he said was his first time on stage in almost two years. And not only did they perform together, but he also informed the crowds that he has a new album "coming soon."

Considering the fact that Grande surprised guests with *NSYNC (minus Justin Timberlake) during her first Coachella set this year, it was practically a given that she had something big up her sleeve for fans when it came to her second set, and it seems they weren't disappointed. According to People, Grande performed most of her set before Bieber joined her on stage.

“I haven’t been on stage in like two years. I came out here I had no idea I was going to be on stage tonight,” Bieber said. “So anyways this is my first time on stage in two years. I had to get my groove back, my swag back. By the way, album coming soon.”

While he was out there, Bieber performed his song "Sorry" with Grande.

After the performance, Bieber took to Twitter to share his thoughts. "Thank you @ArianaGrande. Thank you @Coachella. That felt right. Love you," he wrote.

It was a big deal that Bieber joined Grande on stage because he obviously has a huge fan base, but also because it was completely unexpected. Recently, Bieber has been open about his mental health, and about the fact that taking care of himself means that he's had to take a step back from creating new music and performing.

Back in March, he shared an update on his next album on Instagram, letting fans know that he was unhappy the last time he toured and would release new music when he felt he was ready to do it right. He wrote:

"Music is very important to me but Nothing comes before my family and my health. I will come with a kick ass album ASAP, my swag is undeniable and my drive is indescribable his love is supernatural his grace is that reliable.... the top is where I reside period whether I make music or not the king said so. but I will come with a vengeance believe that."

But now that he's on stage again and saying that new music is coming "soon," it seems like he's doing better, and that's certainly good to hear.

It's great to see Bieber back on stage, and since he seemed to have taken a step back from this part of his life, it was definitely surprising that he decided to join Grande at Coachella. But now that he says an album is coming soon, maybe we'll see a lot more of him in the coming months. After all, Grande herself has released two full albums in less than a year — is it possible all that inspiration has rubbed off on him?