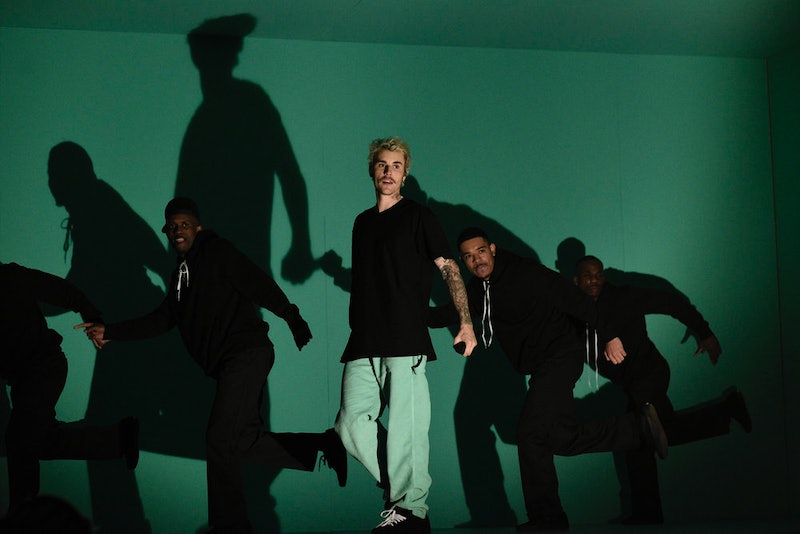 Some yummy news for Beliebers: Justin Bieber played new songs on Saturday Night Live in his first TV performance in nearly four years. The singer returned to SNL for the RuPaul-hosted Feb. 8 episode as musical guest and performed “Yummy” and “Intentions,” two tracks from his upcoming album Changes, out on Feb. 14. Bieber last took the stage for a live TV performance on The Ellen DeGeneres Show in 2016 to perform “Cold Water.”

For his first performance of the night, Bieber sang “Yummy” against the backdrop of a green screen to accentuate the singer and his dancers’ shadows. Donned in matching green pants and a black tee, Bieber gave audiences a more stripped down version of the upbeat track as various backup dancers later joined in to showcase their synced choreography.

In his second and final performance, Bieber debuted “Intentions,” and brought out the song’s collaborator, rapper Quavo. “Intentions” proved to be the ultimate contrast to “Yummy” — as opposed to the muted green screen, the singer and his backup dancers performed the track in front of dancing neon pink, purple, and blue lights as lyrics flashed like marquees in the background.

The performance marked nine years since Bieber last took the SNL stage. His third time on the NBC sketch comedy series, Bieber last pulled double duty as host and musical guest in 2013, and, prior to that, made his debut as musical guest alongside host Tina Fey in 2010. On hand to promote his new album, Changes, Bieber’s new tracks come five years after the release of his 2015 album, Purpose.

The “Yummy” singer’s musical guest stint comes a few days after he debuted the music video for “Intentions” on Thursday, Feb. 6. The video spotlights women of Alexandria House, a Los Angeles-based transitional shelter and hospitality center that helps women and children attain economic stability. The video calls on fans to donate to Bieber’s Intentions Fund to support the families housed at the center and the women featured in the video.

Bieber will embark on a North American tour in May. Some proceeds from the tour will go to the Bieber Foundation to support mental health wellness. “I wanted to just basically shine a light on, you know, issues that people are often overlooking," Bieber said on MTV’s Fresh Out Live. "People are marginalized and overlooked, and I just wanted to make people aware of the hurting and broken people that are suffering in humanity and really do my best to just make a difference.”

Watch Bieber’s SNL performances of “Yummy” and “Intentions” above.

More like this
Michael B. Jordan Tackled His "Public Breakup" With Lori Harvey On 'SNL'
By Brad Witter
The Black Lotus Staff Has "Had Enough" In The 'White Lotus' Spoof From 'SNL'
By Brad Witter
Linda Ronstadt’s “Long Long Time” Plays A Pivotal Role In The Last Of Us
By Brad Witter
Britney Spears Shares & Deletes Photos Of Justin Timberlake From 22 Years Ago
By Jake Viswanath
Get Even More From Bustle — Sign Up For The Newsletter
From hair trends to relationship advice, our daily newsletter has everything you need to sound like a person who’s on TikTok, even if you aren’t.