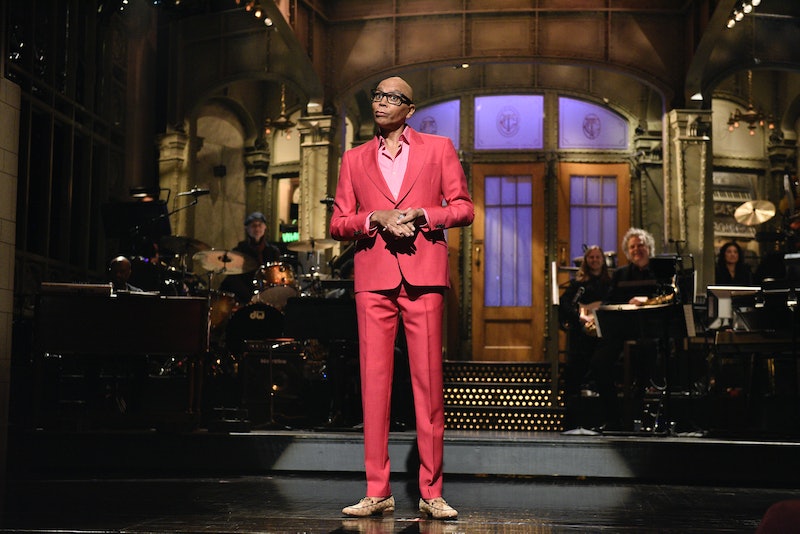 Mama Ru came to slay Studio 8H down. During RuPaul's Saturday Night Live monologue on Feb. 8, the Emmy winner dropped nuggets of wisdom like only he could. One highlight: "If they ain't paying your bills, don't pay them no mind!" Of course that was only the beginning. After reflecting on "seedy" 1980s New York City, the RuPaul's Drag Race host also encouraged fans to "get the money up front" and to not take life too seriously.

"I take kindness seriously. I take love seriously. But all the rest, baby, just have fun. And if you follow your heart, dare to be different, and use all the colors in the crayon box, who knows where you'll end up?"

For those who may have been surprised to see him opening the NBC sketch comedy show out of drag, he had some more tea to spill. "I always say, you're born naked and the rest is drag," RuPaul explained to the audience. "Whatever you put on after you get out of the shower, baby, that's your drag." (Oh, he claimed to be wearing his "grandmother's panties," by the way.)

Not up on you dragcabulary? Mama Ru had viewers covered there, too, breaking Drag Race down into terms non-watchers could understand: "Our girls gag us with their eleganza, death drop for the children, and slay the house down, boos." (PSA: Drag Race Season 12 debuts on Feb. 28.)

With all of that out of the way, Ru sashayed into a pre-filmed segment in which she gave Pete Davidson's "Chad" a drag makeover. Later, in between introducing Justin Bieber as the week's musical guest, the AJ and the Queen star played characters ranging from a Designing Women-esque diner to an inappropriate police officer.

In her sketch with Davidson, RuPaul continued spreading hard-earned wisdom of a different kind, as she helped transform Chad into the generation's next "greatest drag queen in the world." Among her lessons for Chad: how to achieve a "no bulge" tuck, as well as the art of sissying one's walk.

Davidson wasn't the only SNL cast member to get lessons on how to strut from Mama Ru. Again referencing her 2014 song, RuPaul taught Cecily Strong how to "sissy that walk" in a promo leading up to the live show.

Although this was RuPaul's first time hosting the show, it certainly wasn't her first time on SNL. When Charles Barkley hosted the show in 1993, Ru briefly performed in a sketch with the now-retired NBA star, as noted by Billboard. Through all of RuPaul's life lessons in the nearly three decades in between, he may have ended the episode by sharing one of the best: "If you can't love yourself, how in the hell you gonna love somebody else?"

More like this
Keke Palmer Just Announced She's "Going To Be A Mom" On 'SNL'
By Brad Witter
The 'Kenan & Kel' Reunion On 'SNL' Took A Dramatic Turn, Thanks To Keke Palmer
By Brad Witter
Who Is Pete Davidson Dating? He "Courted" Emily Ratajkowski At A Knicks Game
By Jake Viswanath
Chloe Fineman Revealed Friends Who Date Pete Davidson "Report Back Nice Things"
By Stephanie Topacio Long
Get Even More From Bustle — Sign Up For The Newsletter