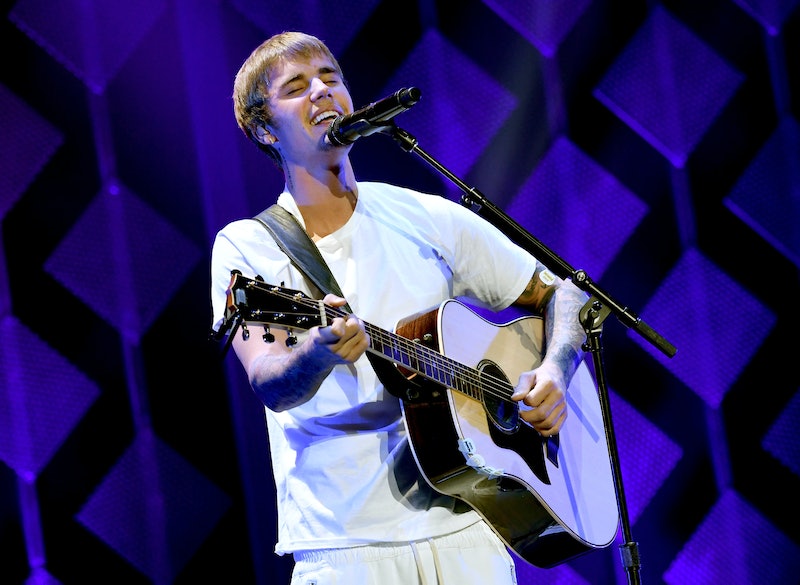 On Sept. 30, Justin Bieber and Hailey Bieber got married again, but that doesn't mean he's solely focused on his personal life. In an Oct. 2 Instagram post, Justin Bieber teased his new single in a video of a pink flower opening up in the desert. The singer wrote in the caption, "New music. Wedding music. @danandshay and this guy. Friday." The Dan + Shay Instagram page posted the same video with the caption "@justinbieber | 10.4.19."

In a Sept. 30 Instagram post, the duo teased that new music was on the way, but they didn't confirm the collaboration with Bieber until Oct. 2. Other than the release date, the artists haven't shared any other information about the song. However, on Oct. 2, Billboard reported that the song is a mid-tempo track is called "10,000 Hours." All three of them co-wrote the song together along with Jordan Reynolds, Jessie Jo Dillon, and Jason "Poo Bear" Boyd. The website also confirmed that "10,000" Hours" will be the first single from Dan + Shay’s upcoming album, which is currently untitled.

Billboard also reported that the artists have known each other for over five years, possibly through sharing the same management. Bieber's manager Scooter Braun also co-manages the musical duo along with Jason Owen.

Braun and Dan + Shay were all in attendance at the Biebers' star-studded wedding in South Carolina. TMZ reported that Bieber performed the song with Dan + Shay on stage at the wedding reception. Bieber did refer to the collaboration as "wedding music" on in his Instagram, so that did seem like an appropriate venue for that performance. Perhaps that's a hint that some wedding footage could be included in a music video for the song. Braun hinted at the possibility of a Mrs. Bieber appearance when he "liked" an IG comment asking "Will Hailey be in the music video?"

While Bieber hasn't released any singles as the lead artist since his 2017 song "Friends," he has been all about the collaborations recently. On May 10, Ed Sheeran and Bieber sang together on the song "I Don't Care." In July, Bieber collaborated with Billie Eilish on the remix for her song "Bad Guy." Bieber was featured on Chris Brown's song "Don't Check On Me," which was released on June 25. In June 2019, Dan + Shay featured Tori Kelly on their song "Speechless."

Bieber has been very open about his wedding on social media, so it is fitting that he will continue to share more about it through his music. On Oct. 1, the singer shared a picture from the reception's photo booth with the caption "my bride is [fire eomji]."

In another wedding photo caption, he wrote, "Looking forward to forever with you @haileybieber." And now, the Beliebers and the Dan + Shay fandom have a new song to look forward to. Fans have already shared their anticipation for the track on Twitter.

There is always hype around Bieber's music and the wedding is still talked about days later. Some "wedding music" sounds like it's just what the Beliebers need.

More like this
Justin & Hailey Bieber's Bond Is "Unbreakable" Amid His Ramsay Hunt Diagnosis
By Bustle Editors
Adele Says It Would Be “Wonderful” To Have Kids With Boyfriend Rich Paul
By Jake Viswanath
Rihanna Is America's Youngest Self-Made Woman Billionaire, According To 'Forbes'
By Hugh McIntyre
Britney Spears’ Honeymoon Plans Include Watching This Movie With Her Husband
By Grace Wehniainen
Get Even More From Bustle — Sign Up For The Newsletter