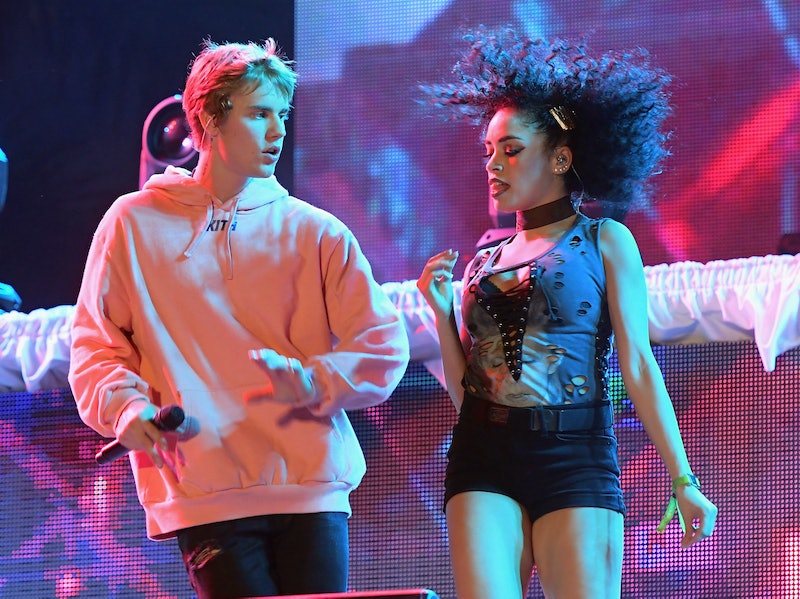 Despite canceling his tour, Justin Bieber's career is still going strong. On Thursday, Bieber's new song "Friends" was released, produced by BloodPop, who worked with the Biebz on Purpose, and it was catchy as hell. But, considering the lyrics, we have to wonder who Bieber's "Friends" is about.

"Can we still be friends?" Bieber asks on his latest track to an ex who he swears he's over but doesn't want to quit completely. Being that Selena Gomez is Bieber's most famous ex it's hard not to assume it's about her. Sure, it's been awhile for these two — they broke up in 2014 after dating on and off for three years — and Gomez has made it very clear she's over Bieber. But she also told Vogue Australia last year that she still can't exclude Bieber from her narrative.

"For a while my private life was the most talked about thing," Gomez said."Nobody really knows everything and they can only assume. You want to do what you love but all this other stuff overshadows it so it makes it a little harder for people to take me seriously." I imagine her new relationship with The Weeknd and all the fire music she's dropping is keeping her too busy to worry about her ex.

But, it's clear, the Biebz isn't over this girl, who may or may not be Gomez, no matter how hard he wants to convince us he is. "Girl, you wonderin' why I've been callin'?/Like I've got ulterior motives," he sings. "No, we didn't end this so good/But you know we had something so good."

With this bop, Bieber is on a mission to get his ex back and he's willing to take a detour through the friend zone to do it.

Bieber never mentions Gomez or any other girl by name, for that matter — most recently he was rumored to be dating Sofia Richie — which is smart. He knows that fans can't help themselves when it comes to any Jelena content.

The fact that this track, co-written by Julia Michaels and Justin Tranter, could be about Gomez keeps hope alive for those Beliebers who still believe these two can be friends or even more. But he has plausible deniability since there's nothing too specific in this song to say, "Oh yeah, this is definitely about Selena."

It doesn't hurt Bieber's rep either to start his latest song with a line about this ex girl's mom:

I was wonderin' 'bout your mama

Did she get that job she wanted?

So that car that gave her problems

It also won't stop fans from wondering if this is about Gomez being that she's very close to her mother Mandy Teefey, who is a fan of the Weeknd's, FYI. Can't blame Bieber for working all the angles to get in this girl's good graces though.

It probably earns him brownie points with his own mom, too, who clearly had a soft spot for Gomez. Last year, Bieber's mom Pattie Mallette even tweeted happy birthday messages, yes, as in plural, to her son's ex, writing, "I am blessed to know you @selenagomez & celebrate this precious day you were born!"

Bieber also has a soft spot for Gomez since he's been known to post #TBTs of their good ol' days. We're talking PDA pics, one of which Gomez even responded to last year with just one word: "Perfect."

Bieber also has a habit of talking her up in interviews even after they broke up. He told Access Hollywood in 2015 that "a lot" of Purpose was about Gomez. who he called his "first love."

"It was really tough. I don't know if I'm over it yet," Bieber said then. "I think that I'm definitely in another place and I think we've definitely went our separate ways. I love her and I want her to be awesome, but there are things that remind me of her."

So maybe this song is about Gomez and maybe his motives aren't completely pure. After all, he admits there are some selfish reasons why he may want to talk to her.

Wonderin' if you got a body

To hold you tight since I left

Wonderin' if you think about me

Let's be honest, Bieber is likely never going to confirm or deny who this song is about and that's part of the fun. You get to decide if this is a sweet plea to get Gomez back, a desperate sign that this boy needs to say bye for good, or just Bieber doing a bit of creative trolling. Either way, "Friends" is a summer jam you're going to want to keep on repeat long after Labor Day.