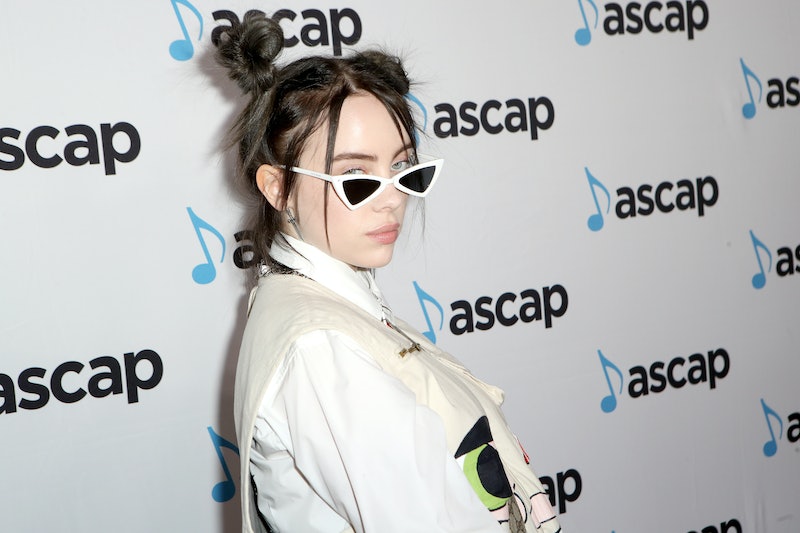 Billiebers assemble. On Thursday, July 11, Billie Eilish and Justin Bieber's remix of "Bad Guy" climbed into a miniature red convertible and zoomed onto the internet, raring to knock us off of our little tricycles. Just as many suspected, the Biebs is indeed on a piping hot ’n’ fresh remix of the tremendous When We Fall Asleep, Where Do We Go? track. What a treat for our ears it is.

The new version of Eilish's song was accompanied by a very special throwback photo. In the snapshot, Tween Eilish is posing in front of her wall of Justin Bieber posters. Oh, it is also crucial to mention that Tween Eilish is wearing what appears to be a fantastic rainbow-colored dance costume that is covered in sequins and a red bow in her hair. Always and forever a style icon, that Billie Eilish.

Earlier this week, the "When The Party's Over" singer hinted that she “might have something for” us, and man, she did not just have any ol' something for us. She had a flippin' Justin Bieber collab coming down the pike. Considering how big of a Bieber fan Eilish is, this is major. Some of us can only dream of meeting our idols; Eilish joined musical forces with hers and they created a fun reimagining of one of her songs.

When the Bieb-ified version of "Bad Guy" made its way onto the internet, Eilish posted the aforementioned sequined spectacular on Instagram and wrote, “BAD GUY FEAT. JUSTIN BIEBER OUT NOWWW OMGFFFFGGG ANYTHING IS POSSIBLE MAN.” Bieber also shared the pic and song link, writing, "So proud of you @billieeilish."

The remix rules, Eilish's throwback photo rules, and Bieber's tweet about the remix rules. Duh. (That "duh" should be read in the Billie Eilish "Bad Guy" voice... duh.)

Eilish's Belieberdom (sure, that word works) has been well-documented. When speaking with Entertainment Tonight in March, she shared that she's been a fan since she was 12. She also revealed that she and Bieber exchanged some DMs, calling him "so sweet."

"The first thing he sent was a screenshot of a DM I sent him in 2014," she laughed. "He didn't remember it, but you know how when you follow somebody you can see everything they've DMed you in the past? ... It felt good and it felt bad at the same time."

Eilish and Bieber met for the first time earlier this year at Coachella, and wow, what a moment it was. When the pair of pop stars crossed paths in the crowd during Ariana Grande’s set on April 14, longtime Belieber Eilish appeared to double over in disbelief. After they stared at each other for a few seconds, she walked over to the "What Do You Mean?" pop star. The two embraced, and the crowd that had formed around them shrieked in delight.

And what do you know? It's only been three months since that interaction happened, and Bieber is on a remix of one of Eilish’s singles. Awwww. I'm going to have a gooooood cryyyyyyy. Duh.