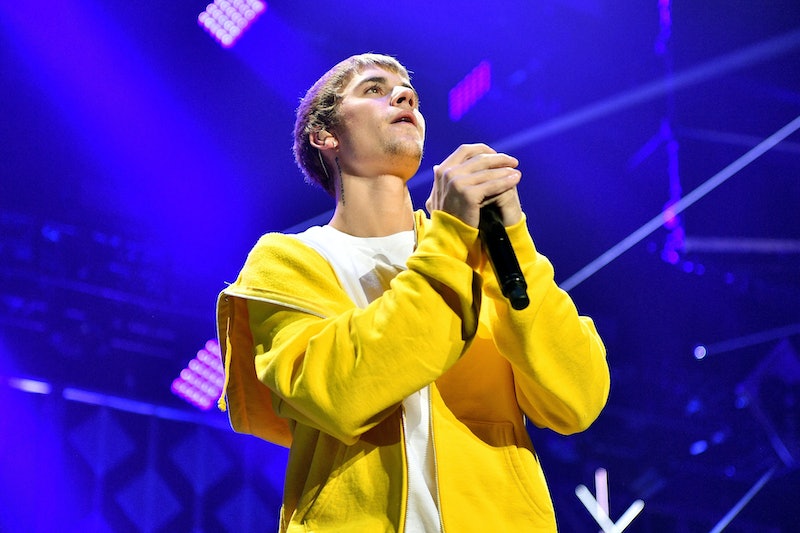 In a new Instagram post consisting only of text, Justin Bieber opened up about fame, mental health, and relationship abuse. Nodding to how young he was when he first came into the spotlight, the singer wrote that he knows what it's like to be trapped in "a cycle of feeling disappointment after disappointment." And he was explicit about connecting his fame to his "massive ups and downs" that led to his struggle to break a cycle of drugs and relationship abuse, People reported.

"My whole world was flipped on its head" when he rose to fame at age 13, he wrote. He already hadn't grown up "in a stable home," and that didn't make it any easier to navigate the extreme ups and downs of being a famous performer. So when you feel "like there's trouble after trouble after trouble," he said, "I can fully sympathize with you."

Opening up about how those troubles have shaped his life, the 25-year-old wrote about the direct path he saw from his spiraling emotional health to his relationships with drugs and women. "I started doing pretty heavy drugs at 19 and abused all of my relationships," he said. "I became resentful, disrespectful to women, and angry."

Bieber linked his years-long struggles to having been a child star with no sense of rationality and "no skills in the real world." And, he said, he's not surprised that so many celebrities like him "end up having a phase of drug abuse" because it's so hard to "manage the huge ups and downs that come with being an entertainer."

Those ups and downs are indeed accompanied by, as Bieber wrote, "access to whatever I wanted." This makes sense, because major instabilities in a young person's life (such as the ones Bieber was describing) often lead to adult drug use and other behaviors that may put someone and those around them at risk, according to a 2016 study published in the American Journal of Preventive Medicine.

And that kind of instability and access can lead to a kind of entitlement that Bieber referenced when he wrote that "you hear [worldwide praise] enough as such a young boy and you actually start believing it." It's easy to understand how that combination of entitlement and access can cycle into what Bieber implied was the opposite of being what he's trying to become now: "a good man."

It's perhaps not a coincidence that Bieber has connected being a famous young boy to drug and relationship abuse before trying to figure out how to be a good man. A 2015 study published in the journal Psychology of Men and Masculinity concluded that when people who are perceived and treated as men feel out of control from a young age, they are more prone to engage in abusive behavior (especially toward women) as they get older.

"Sometimes it can get to the point when you don't even want to live anymore," Bieber wrote to his Instagram followers, saying he understood that feeling well. But, he went on, even though he had felt like he "could never turn it around," he's working on it.

In order to break through a cycle of abuse and anger, he said that he's surrounded himself with "extraordinary people who love me for me." And, according to a 2017 study published in the American Journal of Men's Health, that type of treatment is an excellent way to break through cycles of anger, self-loathing, and abuse. The study found that socially connecting to others is key to breaking abusive cycles, no matter what part of an abusive relationship you find yourself in.

So when Bieber said that he is working on no longer being distant, no longer hiding and being "a shell of a person," he's offering you just a bit of insight into how he's trying to break his cycle.