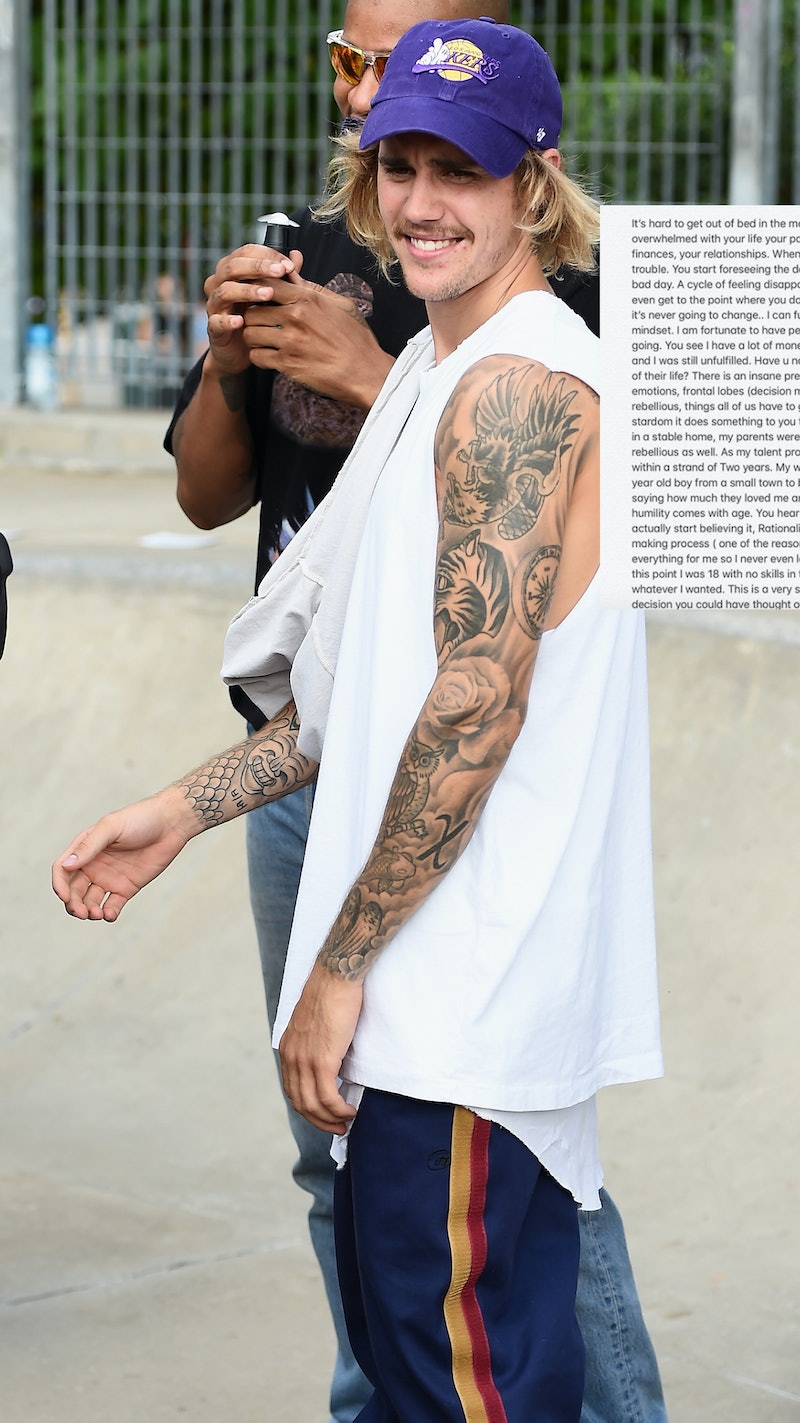 Recently, Justin Bieber has been honest with fans about his mental health, and now, he's sharing even more about his journey. In a lengthy Instagram post on Sunday, Sept. 2, Bieber opened up about his past struggles, and it truly shows how far he's come.

In his post, which featured a screenshot from his Notes app, Bieber started by talking about how difficult it was for him to get out of bed in the morning because he was trapped in a "cycle of disappointment after disappointment." "Sometimes it can even get to the point where you don't even want to live anymore," he wrote. "Where it feels like it's never going to change. I can fully sympathize with you. I could not change my mindset."

Bieber continued on to say that achieving so much success and fame at such a young age — he was only 15 years old when his debut studio album, My World 2.0, was released, and even younger than that when he first started making music — had a big impact on him, and not necessarily for the best.

"As my talent progressed and I became ultra successful it happened within a strand of two years," Bieber wrote. "My whole world was flipped on its head. I went from a 13 year old boy from a small town to being praised left and right by the world with millions saying how much they loved me and how great I was."

Bieber added that because people had done everything for him, by the time he was 18, he had "no skills in the real world" and a lot of money, which led to him making some bad decisions. This time in his life he wrote about included his 2014 DUI arrest and the incident where he egged a neighbor's house — and that's just a couple of times he made headlines during that period.

"I started doing pretty heavy drugs at 19 and abused all of my relationships. I became resentful, disrespectful to women, and angry. I became distant to everyone who loved me, and I was hiding behind a shell of a person that I had become. I felt like I could never turn it around. It's taken me years to bounce back from all of these terrible decisions, fix broken relationships, and change relationship habits."

But now, it seems Bieber's out on the other side, and went on to call this part of his life where he's married to Hailey Baldwin the "best season of my life."

"[Marriage] is an amazing crazy new responsibility," he said. "You learn patience, trust, commitment, kindness, humility, and all of the things it looks like to be a good man. All this to say even when the odds are against you keep fighting."

In the 10 years since his career first began, Bieber has had a lot of ups and downs, as he wrote in his post. But his vulnerability and the way he's been tackling his mental health head on says so much about how far he's come and who he is today after everything he's been through.

It's good to hear that he's doing better these days, and hopefully, he will continue to keep fans updated on his journey. Even after becoming so famous at such a young age, it seems like Bieber is still trying to be the best version of himself.