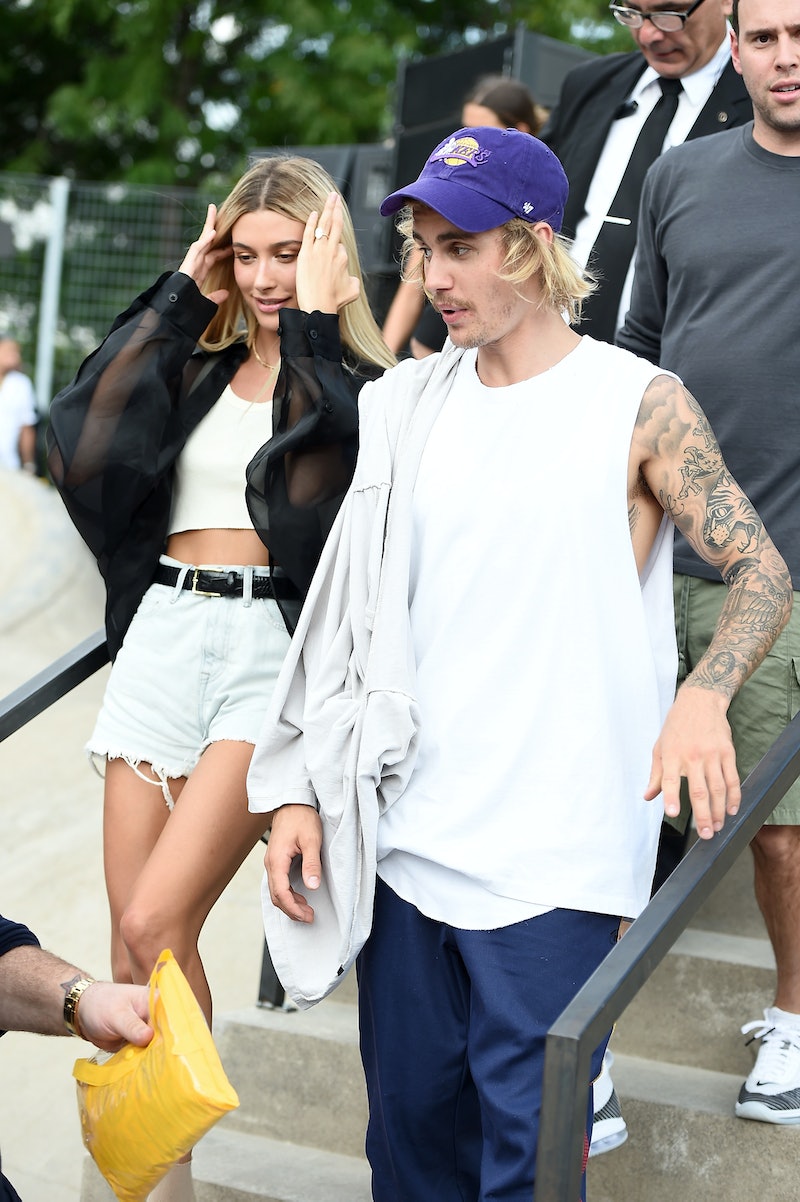 The Biebers are apparently gearing up to go down the aisle again. Justin and Hailey Bieber’s wedding date is just days away, according to reports — for their second wedding. As an insider recently told E! News, the "countdown is on and [the Biebers] are really looking forward to it." Hailey and Justin have been legally married since last September, but they have been waiting to throw a wedding event.

It looks like the wait is almost over. On Aug. 22, TMZ shared a photo of a save-the-date that indicates their wedding is set for Sept. 30 and will happen in South Carolina. The day after the save-the-date was released, People revealed a source said the "Where Are Ü Now" singer and the model would host their ceremony at South Carolina's Montage Palmetto Bluff. People’s source went on to add that the couple's “wedding planner is working with local vendors to create the most special ceremony and celebration.”

Though the duo has tried to, as a source reportedly told People last month, "keep the wedding details quiet," the details keep rolling in. As far as decor goes, an insider recently told E! News that "Hailey wants all white and champagne-colored decor with beautiful green foliage." The insider also said the wedding "will be partially tented, but they want to get married out in nature." On Wednesday, TMZ reported Hailey and Justin asked Daniel Caesar to act as wedding singer on their (second) big day. According to TMZ's sources, Caesar accepted their request and will perform at their ceremony. And when Vogue asked Hailey about her wedding dress in February, she revealed it is "kind of like an off-white color," but did not say more than that.

Justin and Hailey reportedly tied the knot on Sept. 13, 2018 at a New York City courthouse, but this would not be their only wedding event. A source told People that the couple would eventually "have a big blowout, in front of God and everyone they love." They reportedly set their sights on a January wedding, but ultimately they appeared to postpone because, as a source said in a Jan. 9 E! News report, they were not "going to rush it" and were fine with taking some more time "to make sure that its everything they want it to be."

A few days later, there were more wedding date rumblings. On Jan. 15, Page Six reported the couple sent out save-the-dates for a Feb. 28 wedding. And a couple days after that Page Six scoop dropped, TMZ reported the event was set to take place the weekend of March 1. Evidently, neither the Feb. 28 plan nor the March 1 plan panned out. According to TMZ, Hailey and Justin have postponed the wedding three times. In February, People reported that a source said they couple would "have a wedding ceremony with family and friends eventually" but were holding off so Justin could put energy into his mental health. By June, the wedding date talk had resumed.

In less than one week, Hailey and Justin could be pronounced Mr. and Mrs. Bieber (again).

More like this
What Is Megan Thee Stallion’s Net Worth? The Traumazine Hitmaker Isn’t Worried About A Budget
By Hugh McIntyre
Megan The Stallion’s “Anxiety” Song Shouts Out Britney Spears & Whitney Houston
By Grace Wehniainen
The Best Memes & Tweets About Beyoncé’s Surprise “I’M THAT GIRL” Video Teaser
By Brian Anthony Hernandez
'Traumazine' Has Megan Thee Stallion Twitter Dancing Through Their Feelings
By Grace Wehniainen
Get Even More From Bustle — Sign Up For The Newsletter