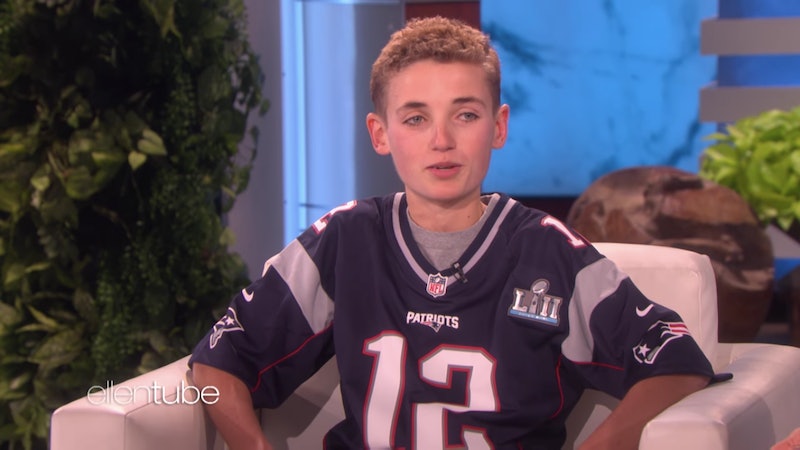 As if the Super Bowl "Selfie Kid" wasn't already one of the luckiest kids in the world, he got another surprise when he appeared on the Friday, Feb. 9 episode of The Ellen DeGeneres Show. Ryan McKenna, the "Selfie Kid," was surprised by Justin Timberlake during his appearance on the talk show. And Timberlake gave his fan a gift that will surely make you a little bit jealous.

The Hingham, Mass. native got to keep his 15-minutes of fame alive as he appeared on the popular talk show. McKenna related that he already got the surprise of a lifetime when his father revealed to the family that he got them tickets to go to the Super Bowl, only two weeks before the game. But, as everyone knows, the surprises didn't and haven't stopped there.

During his interview, Timberlake actually called in to chat with the famous Selfie Kid. McKenna immediately broke into tears when he heard the singer greet him over the phone, which is completely understandable. Timberlake told the youngster, "It's nice to meet you, finally."

If the singer simply calling in wasn't cool enough, he also had one last surprise for McKenna. Timberlake told him that he'd be in the Boston area for his upcoming Man of the Woods tour and that he'd love for McKenna and his family to attend. DeGeneres then revealed the tickets, with accompanying VIP backstage passes to meet the entertainer himself to the very surprised 13-year-old.

McKenna and his family were also presented with VIP tickets to a New England Patriots game during the next football season, courtesy of the NFL. No matter whether you're a Timberlake fan, a Patriots diehard, or both, you're probably feeling pretty jealous of the Selfie Kid right about now. (I know I am.)

In case you missed the biggest televised event of the year, McKenna came to social media prominence during Timberlake's Super Bowl halftime show. During the performance, the "Cry Me A River" singer joined the stadium's audience during a rendition of "Can't Stop The Feeling." Luckily for McKenna, Timberlake joined the section of the stadium where he was sitting with his family.

The Massachusetts native was able to capture a selfie with the singer all while the performance was taking place, which is where his new moniker, "Selfie Kid," comes from. The moment gave way to one of the best memes to come out of the high-profile event.

McKenna got the chance to chat about his Super Bowl experience afterwards to multiple publications. "It was really crazy," he told Entertainment Tonight. "It's awesome. I've gotten so much stuff on social media and stuff. It's crazy. My phone is blowing up." His dad also couldn't help but gush over all of the excitement and told the publication, "It was fantastic for my son."

The "Selfie Kid" also talked to the Twin Cities Pioneer Press about the thrilling moment. He told the reporter that he immediately got his phone all set up to go when he saw Timberlake heading through the crowd. He said, "I just thought to myself, ‘I’ll never get this opportunity again in my whole life,'” and continued, “I just went for it.” McKenna also said that, almost as soon as the moment happened, his phone started blowing up and that it was almost dead from the amount of notifications he received right after it happened. Guess that's what happens when you become a viral meme.

After all of the Super Bowl excitement and his Ellen DeGeneres Show appearance, it's safe to say that McKenna's one of the luckiest (selfie) kids in the world right now.