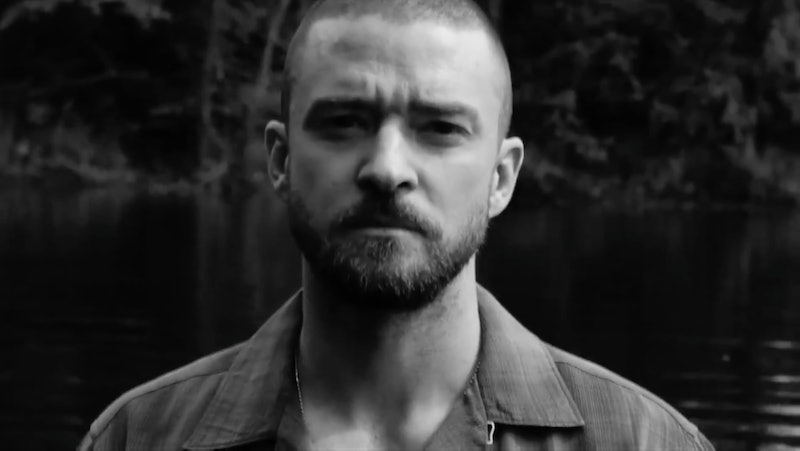 With his return to music now official with the release of "Filthy," details from Justin Timberlake's forthcoming album continue to baffle fans of the 36-year-old entertainer. Among other things, a recent reveal of Timberlake’s Man Of The Woods track list has left many wondering about some of the possible meanings behind the yet-to-be released songs. Timberlake took to Twitter to share the handwritten list of song titles with fans on Friday, Jan. 5, revealing that the body of work would offer 16 tracks in total and feature notable collaborations with fellow Grammy Award-winning artists, Alicia Keys and Chris Stapleton.

Though no other songs or snippets from Man of the Woods have yet to hit the airwaves, "Filthy," the lead song from the new album, has already begun to send fans into a frenzy as many were unsure of how to feel about the single and its accompanying video following its midnight release on Jan. 5. The song's futuristic sound and visual came as a surprise to those who were expecting a different vibe given the project's title and promotional artwork, while others seem to be open to the progressive vibe of the tune's melody and sexually suggestive content.

The mixed bag of emotions has seemingly piqued curiosity about other songs from the album and their possible meanings. With details still scarce surrounding the cohesive album, which is due to be released in its entirety on Feb. 2, there are quite a few clues that can be taken away from Timberlake's track listing — judging by the song's titles alone.

No speculation necessary here: This song is as provocative as its title suggests.

Based off the name along, this tune sounds like it may become the party anthem of Summer 2018.

In the lyrics for "Filthy," Timberlake explains, "I guess I got my swagger back." It sounds like that confidence may also be his mood on another song from his new album.

Although it's unclear what the title track from the album actually means, Timberlake makes it perfectly clear that he'd make one sexy lumberjack in the visual for the album of the same name. It also alludes to the notion that Timberlake may resort back to his roots in country music with the song.

This songs sounds like it could be about elevating in life and love.

Much like "Sauce," this tune sounds like if may be about creating your own vibe and riding it out.

JT seems to have all the tools for the job on "Supplies."

A duet with Alicia Keys, "Morning Light" just may be a love song about Timberlake's wife Jessica Biel.

This collaboration with country/blue grass singer Chris Stapleton will most likely give country fans all the feels. As far as content, the song could possibly be about a disagreement with a lover that Timberlake is attempting to work out.

An interlude amidst the song listing which may become Timberlake's way of reassuring fans of his commitment to Biel.

Perhaps another ode to his country music roots, "Flannel" could either be making inference to a wardrobe change for the crooner — or a tryst between the (flannel) sheets with his wife.

The song may pay homage to the state where Timberlake and his family spend a considerable amount of time. A 2015 report from Us Weekly indicates that the pair intend to primarily raise their son Silas at their estate in Big Sky.

Seemingly leaning into his country influence towards the latter part of the album's track listings, "Breeze Off The Pond" also sounds like it may be heavily influenced by Timberlake's time in Montana.

As a part-time resident of Montana, Timberlake may know a thing or two about living off of the land. This song could, perhaps, be a recounting of an experience with nature that occurred while he was out of the spotlight over the past few years.

This tune could possibly be about a tough conversation with a spouse or loved one.

No longer a boy bander, this track may be Timberlake's reflection of the past as looks ahead to the future and what it holds.

While the theme of Man of the Woods continues to remain a mystery, the track listing seems to make things just that much more confusing. Slated to be released on Feb. 2, just ahead of Timberlake's Super Bowl performance, MOTW alludes to presenting itself as a merger of the 36-year-old entertainer's background in both pop and country.