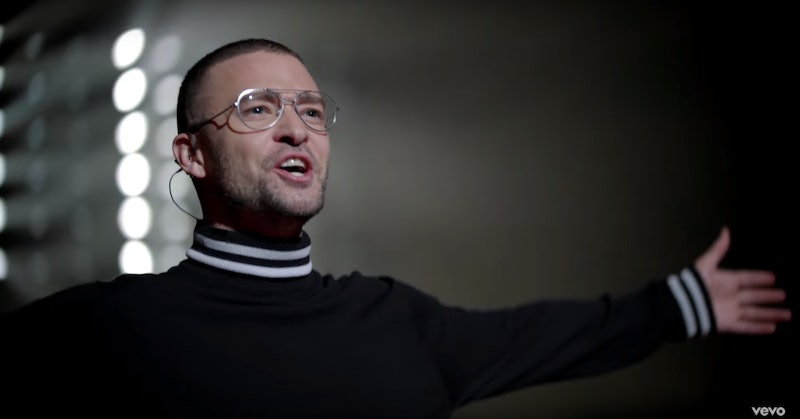 Over the river and through the woods — or, more accurately, in a studio — Justin Timberlake created his new album, Man of the Woods, out Feb. 2. Now, fans can hear Timberlake's new song "Filthy," the first single off his first solo album in five years. That's exciting enough, but what makes this release even more exciting is that it offers a sneak peek at Man of the Woods, which Timberlake called his most "personal" album yet. It's a project that, he says, has him going back to his Memphis roots, but with "Filthy," he's clearly sticking to those dance tunes that he does best.

Before the singer even dropped his new single, he was giving fans tips on how to listen. "This is a song called 'Filthy' by Justin Timberlake," he tweeted. "This song should be played very loud." Basically, fans should turn the volume all the way up to 11 to truly get the full effect of the track.

Though the song veers further into pop territory than anything else, a heavy bass line makes it crunchier than other hits like "Suit & Tie" from The 20/20 Experience or the more recent "Can't Stop the Feeling." Timberlake suggested Man of the Woods is earthier than any album he's done in the past, but "Filthy" is all about the funk.

And on top of releasing the song itself, Timberlake also debuted the music video to go along with it. In it, he impersonates Steve Jobs and acts as though he's presenting a new invention to the world.

Whether you love this song or not, the good news is Timberlake is planning on offering up more music in the weeks leading up to the Man of the Woods release. According to Entertainment Weekly, he plans to release three more singles before his new album drops and before he headlines the 2018 Super Bowl halftime show, where he'll undoubtedly debut new music live. And maybe, even reunite with *NSYNC.

Timberlake has already teased his new album with a video that paints him as a true outdoorsman: stomping through the snow, running through cornfields, and striking some messiah poses in a body of water. After reading all this, you might not be surprised to hear Twitter has already created Timberlake Man of the Woods memes that poke fun at this new persona he's cultivated: a pop star who is one with the Earth.

"This album is really inspired by my son, my wife, my family, but more so than any other album I've ever written, where I'm from," he says in the video, which has him palling around with a whole lot of horses. It's probably why more than one Twitter user turned Timberlake into the Brawny Man.

Whether you thought his teaser was sincere or a little silly, he's going all in. Even the music teased in the video sounds a bit more rootsy than what JT fans are used to. In fact, it sounds a lot like Bon Iver, who trekked out to the woods of Wisconsin to make his 2007 debut, For Emma, Forever Ago.

Whether Timberlake was channeling his inner Bon Iver to make this album is unclear. However, he does have a connection to frontman Justin Vernon, who's worked with Kanye West, most notably on 2010's My Beautiful Dark Twisted Fantasy. On a 2012 episode of Saturday Night Live, Timberlake played Vernon in a sketch where he attempts to write a lullaby for Beyoncé and JAY-Z's daughter Blue Ivy. Let's assume that song didn't make the cut for Man of the Woods.

That's because, with his latest solo album, Timberlake's not trying to impersonate anyone, he's just trying to be himself. To do that, he might sound a little different, though, it's clear he's not straying too far from his past. It's already been announced that he's working with Pharrell, who co-produced more than half of Timberlake's 2002 debut solo album, Justified, with his N.E.R.D. partner Chad Hugo. And, if you believe Pharrell, there's at least one Man of the Woods song that is a "smash" — a direct quote from Skateboard P.

Timberlake is also teaming back up with his longtime producer Timbaland, who co-produced "Filthy." Like Pharrell, Timbaland had some pretty high praise for Timberlake's new album, telling Rolling Stone, "The music we just made? It's going to put him on another plateau." A perfect place for the self-professed man of the woods.