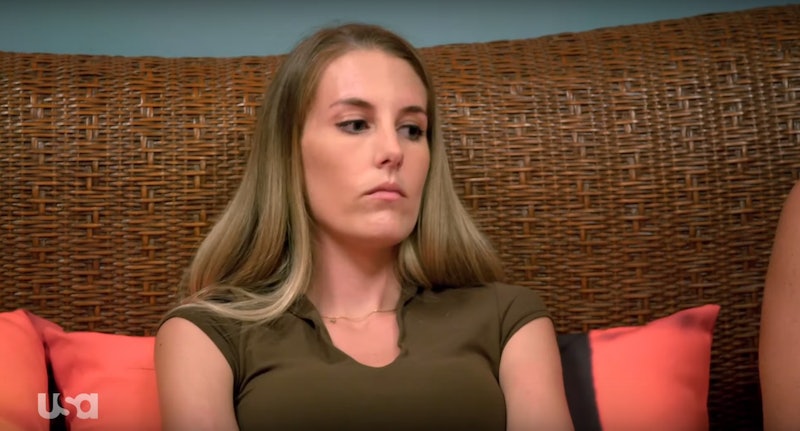 The premise of Temptation Island is simple: four couples head to Hawaii, where they're separated and moved into houses with dozens of singles ready to woo them away from their significant others. Knowing this, you'd think the participants in relationships would be mentally prepared for the possibility that they'll be cheated on, depending on what boundaries they'd discussed beforehand. And yet, even though she says she gave him a lot of freedom heading into the show, Kaci on Temptation Island is in denial that Evan could have slept with Morgan. The irony, of course, is that the audience already knows that the two have been hooking up for three episodes now, but this is exactly the kind of dramatic buildup that makes Temptation Island such tantalizing reality TV.

"At the end of the day, nobody knows Evan the way that I do," Kaci says in the exclusive preview clip streaming below. "Evan loves me, and I just gotta keep following my gut." While it's true that no one can really know what goes on in a relationship except the people who are in it, in this case, all the viewers watching Temptation Island know just a little bit more than Kaci. Even Kady, who only knows as many hard facts about Evan's conduct as Kaci does, seems to be a tad more realistic when it comes to what Temptation Island is about.

Unlike slower-paced series like Terrace House or Netflix's newly debuted Dating Around, which don't rely on dramatic twists, heaps of sexual tension, and lots of free-flowing alcohol, Temptation Island harkens back to the earliest days of reality TV (it is a reboot, after all). It's got all the same appeal of shows like Big Brother or Survivor, where only the audience and the hosts are clued into everything that's really going on. The contestants are wandering around semi-blindly, following their instincts and hoping for the best, without ever knowing what will be revealed in the final cut. Kaci's walked right into the trap.

Bustle writer Kayla Blanton took a close look at Kaci and Evan's social media accounts, and surmised what fans have probably already guessed: the future doesn't look so bright for these two sweethearts. While Blanton also points out that they can't exactly confirm or deny anything before the season ends, neither of them have posted anything indicating their continued romance, and Evan's actions on the show definitely don't make it seem like he's still thinking about marrying Kaci.

Beyond that, Morgan and Evan have left some flirtatious comments for each other on Instagram, which might be an indicator that the pair are still connected post-Temptation Island. Kaci says she'd be willing to forgive Evan (almost) no matter what, but once she learns about what's happened with Morgan, will that still be the case?

By agreeing to go on the show in the first place, it's clear that Kaci is looking for some proof that Evan could be ready to commit to her for good, or that he might be willing to cheat on her again. Obviously she's hoping for the former, but one way or the other, it looks like she's going to get an answer to her question.