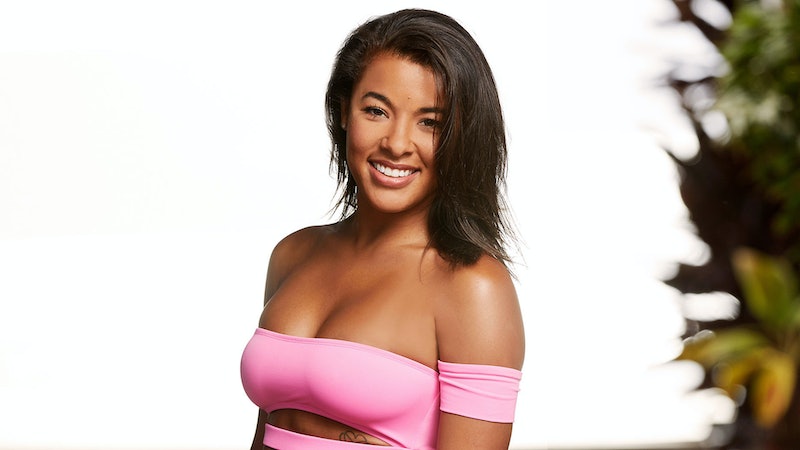 Between betrayal, tears, and more than a few love triangles — or in some cases, love squares — this season of Temptation Island has arguably been more dramatic than any recent Bachelor season. And according to Temptation Island star Morgan Lolar, there's even more drama that didn't make the air. Of course, any seasoned reality TV viewer knows there's editing involved, but that won't make you any less interested in all the juicy behind-the-scenes details.

Temptation Island fans know Morgan as a bubbly, 27-year-old real estate agent who managed to capture the heart of Evan — even though he'd come to the island with his longterm girlfriend, Kaci. However, going into the show, she wasn't at all expecting to find love.

"I almost didn't agree to go," Morgan, who says she was recruited for Temptation Island via Instagram, tells Bustle. "And then my family and friends were like, 'Just go ahead and do it Morgan. You're single, you're not happy right now.'" Basically I thought the worst that can happen is that I come back and I'm still single, you know? At least I'll have gone on an amazing vacation."

But fate — and reality TV — had other plans. Morgan and Evan quickly connected, fell in love, and if things go as planned in the March 26 finale, will leave the island together. Most of Morgan's screen time was devoted to her growing relationship with Evan, which was dramatic in and of itself, but naturally, there's a lot we didn't get to see, too.

"You have to realize there's like hundreds of hours of footage. Filming goes all day, 24 hours, and they'll show maybe three minutes of an entire week," Morgan explains. "There's so much drama that's left out. There were like eight different fights with other people [I thought would be shown] ... but they only showed the one between [Katheryn and me] and we were the closest in the house, which was the funny part."

And according to Morgan, even that fight went very differently. "It made it seem like I came into the confessional room because I was being jealous, but I hadn't actually spoken to Evan yet. I had no interest at that point," she explains. "But we couldn't turn off the lights unless every girl was in the room. So all of us were just waiting [for Katheryn], and Brittney had to wake up in four hours."

Morgan says she then went to tell Katheryn to come to bed, and that's when things took a turn. "I did not expect to get yelled at," she continues. "She did not like that [I told her to go to bed], so she came in screaming at me."

Still, Morgan says her time on Temptation Island wasn't a negative experience — in fact, it was quite the opposite. She says she "made connections with every single person in the house," albeit platonically, and is still close with many of her fellow castmates.

"The best things happen when you're not expecting it," Morgan reflects. "It was an amazing experience. I wouldn't trade it for the world."

More like this
Molly-Mae Hague & Tommy Fury Celebrate Pregnancy Reveal In The Sweetest Way
By Sophie McEvoy and Sam Ramsden
Everything To Remember About Lace Morris Before 'Bachelor In Paradise' Season 8
By Grace Wehniainen
Bachelorette Gabby Kissed Her New Fiancé On 'Dancing With The Stars'
By Jake Viswanath
‘RHOSLC’ Star Jen Shah’s Arrest & Legal Drama, Explained
By Brad Witter and Jake Viswanath
Get Even More From Bustle — Sign Up For The Newsletter