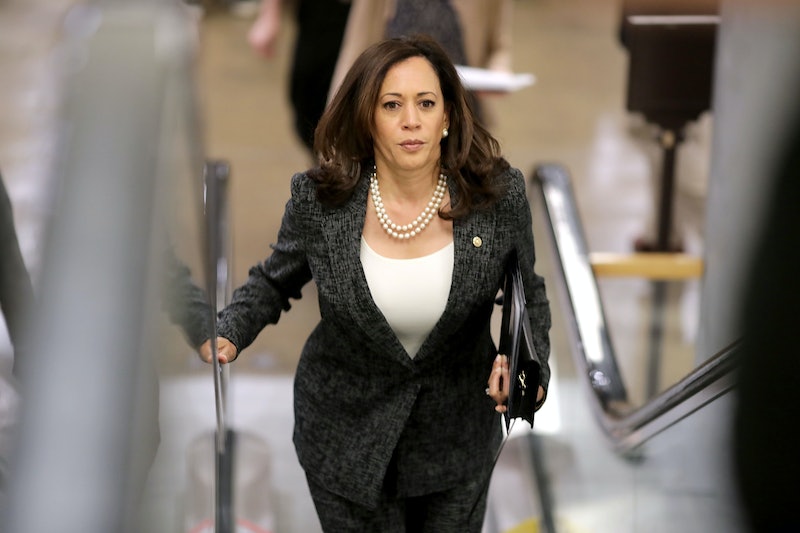 Under the budget proposal that the White House unveiled in late May, federal grants to cities and police departments could be withheld if local law enforcement didn't detain undocumented aliens when requested to by the federal government. Harris, coming from a state that has been very protective of the rights of undocumented immigrants, asked Kelly about this issue, specifically focusing on cases where a federal court had prohibited law enforcement for detaining an immigrant without probable cause that they had committed a crime.

"Wouldn't that force the jurisdiction to choose whether to comply with a federal court ruling or forfeit vital public safety funds that are administered by your department?" Harris asked Kelly.

Kelly responded with a somewhat vague answer, saying that, "federal law is federal law and state law is state law, and if we have a different view of the impacts of some of the rulings..." before Harris cut him off, seemingly unhappy with his tepid response.

She asked him again about the issue, focusing this time on the "Hobson's choice" for local law enforcement, having to choose between the law and their federal funding. And that's where Kelly's decorum snapped.

"Well, Senator, had you not cut me off," Kelly began his next statement, before saying that Homeland Security department tries to work with these local jurisdictions "below the radar." When Harris asked him what he meant, he tried to interject while she was speaking.

"Excuse me," said Harris with Kelly countering, "Can you at least let me finish once before you interrupt me?"

This exchange isn't the first time that Kelly has appeared riled up when responding to tough questions about immigration policy. According to a report in the Detroit Free Press, in late March, Kelly became visibly agitated and threatened to walk out during a meeting with community leaders in Dearborn, Michigan, when asked about accusations that his department unfairly targets Muslims and Arabs.

In the end, the heated exchange between Kelly and Harris did little to explain what the actual policy would be in a case like the ones the California senator was asking about. "I'm willing to work with them in any way I can within the law—federal and local law. Whatever they're comfortable with," said Kelly, sounding reassuring but still lacking clarity about what the policy would be. "I don't make threats to people, Senator."

"Thank you," said Harris, ending the her questioning.