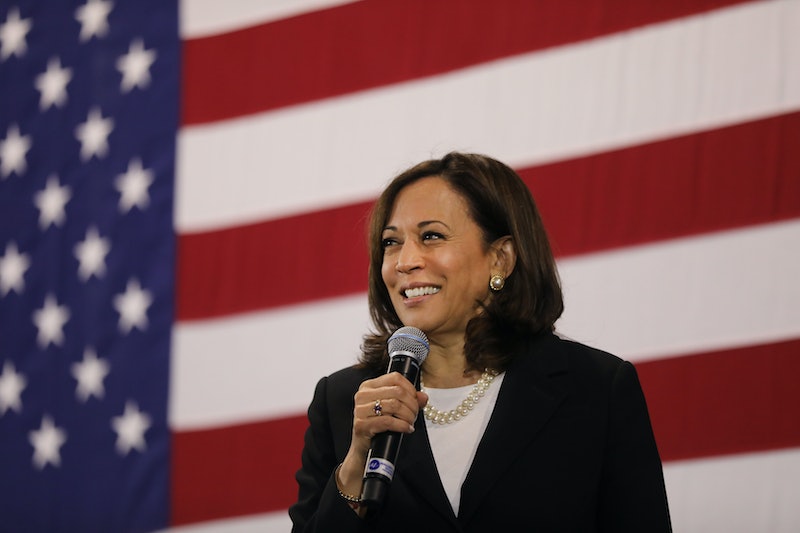 For every dollar that a white man earns in the United States, a white woman makes 79 cents, and women of color make even less than that. Troubling though the problem of the gender pay gap is, none of the Democratic presidential candidates had put forward an explicit plan to begin tackling it — until today. If she's elected president, Kamala Harris plans to end the gender pay gap with a set of strict measures to enact equal pay, according to a proposal unveiled on her campaign website Monday.

Harris' plan lays out both her justification of the issue's importance and the ways she would go about achieving equal pay. "For too long, we’ve put the burden entirely on workers to hold corporations accountable for pay discrimination through costly lawsuits that are increasingly difficult to prove," Harris wrote. "We’ve let corporations hide their wage gaps, but forced women to stand up in court just to get the pay they’ve earned. It’s time to flip the script and finally hold corporations accountable for pay inequality in America."

She has something specific in mind for what holding corporations accountable means: fining companies that don't make an effort to close the pay gap, as The Hill explained.

The fines wouldn't just be symbolic, either. As her proposal described, companies would have to obtain a so-called “Equal Pay Certification” showing that they were actually working to eliminate their pay gap, of course while taking into account matters of merit, seniority, or performance. As an example, Harris referred to Iceland, a country where a similar policy has already been enacted, according to NPR. Part of this certification process, as the proposal explained, would also include looking at the companies' hiring and advancement practices in a broader sense.

"Too often, women are passed over for promotions, not hired for senior roles, or are prevented from advancing due to time they take off to care for a new child or ailing parent," the proposal reads. "These are forms of systemic pay discrimination too, and we need to shine a light on them."

Companies that didn't abide by those guidelines would have to pay a fine of 1% of their profits for each 1% difference in pay between men and women, according to The New York Times. Given that the current gender pay gap stands at about 20% on average just for white women, according to PayScale, this could lead to companies taking a substantial hit if they didn't change their practices quickly enough.

For such aggressive measures to be enshrined in the law, the plan acknowledges that Democrats would have to control both the House and the Senate, as Reuters explains. It therefore includes an additional set of measures that Harris herself could enact as president in the form of executive orders, like forcing major federal contractors to earn Equal Pay Certifications.