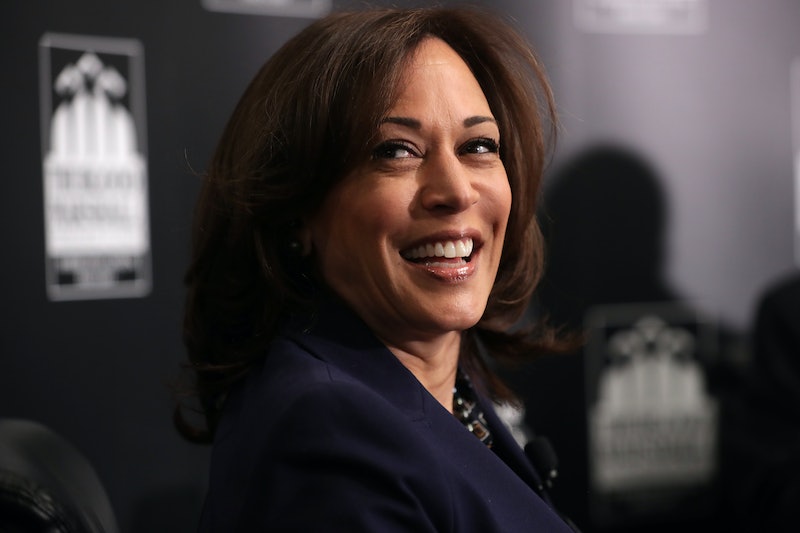 A 2020 candidate has joined the growing calls for the government to ditch Columbus Day. When asked if she would be open to changing Columbus Day to Indigenous Peoples’ Day, Kamala Harris said, "Sign me up." BuzzFeed News reported that the California Democrat gave her remarks at a town hall in New Hampshire on Monday.

In January, Harris officially announced that she would be running in the 2020 election. Harris' press secretary, Ian Sams, tweeted on Monday that she also talked about making Election Day a federal holiday as part passing a "Voting Rights Act." Sams added that Harris discussed automatic voter registration, a move to reinstate the ban on assault weapons, tax cuts for working American families, Medicare, and the Green New Deal at the town hall meeting.

Harris isn't the only prominent Democrat to voice support for renaming or getting rid of Columbus Day. In 2018, New York Democratic Rep. Alexandria Ocasio-Cortez suggested on Twitter that Columbus Day be taken off the federal holiday list and be replaced with Election Day. The movement to switch Columbus Day with Indigenous Peoples' Day is part of activists' efforts to reexamine Columbus' legacy and highlight his documented atrocities against Native Americans.

Other Democrats have opted for more diplomatic answers on the subject. Harris' Democratic colleague and another contender for the 2020 race, New Jersey Sen. Cory Booker, was asked the same question about renaming Columbus Day in New Hampshire on Sunday.

A YouTube video of the exchange showed a participant at the meeting asking Booker if he would push for federal efforts to switch the name for the holiday in a bill titled HB 221. "Across this country right now, the legacy of hate and violence and even mass slaughter of Native American peoples, indigenous peoples is a shame that we haven't fully owned up to," Booker said. Without truth-telling and reconciliation, the New Jersey Democrat said that there could not be accountability.

"I’d like to talk more about why you think it’s important on a federal level," Booker added without specifically vowing to rename Columbus Day. "My commitment to you and indigenous peoples is to tell the truth, to work to address the issues, and to find a way to have real recognition and healing."

The movement to celebrate Indigenous Peoples' Day as an alternative to Columbus Day has already found support in many cities and states across America. Over time, states like Minnesota, Vermont, Alaska, and South Dakota, along with cities like Los Angeles, Berkeley, Seattle, Denver, Phoenix, Portland, Tulsa, Amherst, Nashville, and others, have given people the choice to honor Native American history over Columbus.

For many Native Americans, Columbus was a figure of tyranny and destruction. In his own words, he admitted to oppressing and enslaving indigenous people, including graphic sexual violence. It is this kind of history that the indigenous people of the United States and their allies seek to address and come to terms with.

With Harris' support, the movement's aspiration to take this cause to the federal level could become reality.