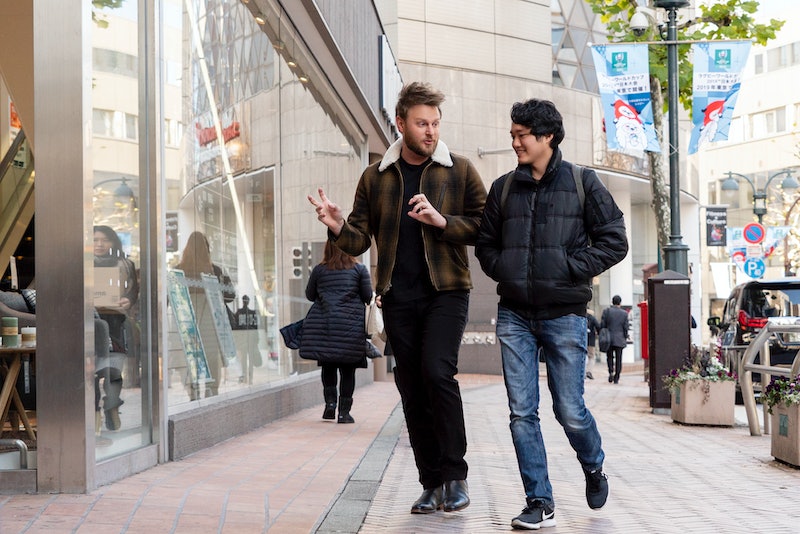 Spoilers ahead for Episode 2 of Queer Eye: We're In Japan. For their latest round of hero makeovers, Queer Eye's Fab Five flew to Japan, where they met Kan, a young cosmetics marketer who adores Beyoncé, but lacked the same comfort in his own skin. He and his boyfriend Tom were in a long-distance, long-term relationship (or "LDLTR," as Jonathan called it), and the guys visited just in time to give him the confidence to introduce Tom to his family for the first time. The meeting went well, and viewers will be happy to know that Kan and Tom are still together.

As explained in the episode, Kan earned his master's and bachelor's degrees abroad in Vancouver and London, where he met Tom. He told the Fab Five that he could more freely express his individuality there because the cultures were more accepting, but Jonathan, Karamo, Antoni, Tan, and Bobby assured him that in order for him to live authentically 100% of the time, the acceptance had to come from within.

By the time each of the guys spent quality time with Kan and introduced him to LGBTQ members of his local community, Kan held his head high and wore a confident smile — one that hid behind a slouched expression when the Fab Five first stepped into his tiny apartment.

Thanks to them, Kan says he is so much happier now. "I have been very happy! I feel the positive energy always coming out of myself," he tells Bustle via email. "Obviously, the reason why I could live my life very happily is because I have been practicing lessons I have learned from the Fab Five."

He says he took away specific lessons from each mentor. "As Karamo taught me, I stand in front of a mirror in the morning before going out and tell myself how amazing I am. By doing this, I heal myself from my insecurities and lift my mood," he explains. He adds that Jonathan inspired him to play with makeup more often, and his daily wardrobe now has a lot more color thanks to Tan. "These little things help me to be myself and happy," he says. "I thank the Fab Five very much from the bottom of my heart."

Today, Tom still lives in the UK and Kan in Japan, so the LDLTR remains in full effect. But December will mark their three-year anniversary, so clearly it's working well for them. Perhaps someday Kan will move to London like he planned, but now that he feels more comfortable at home, he sounds quite happy to stay in Japan.