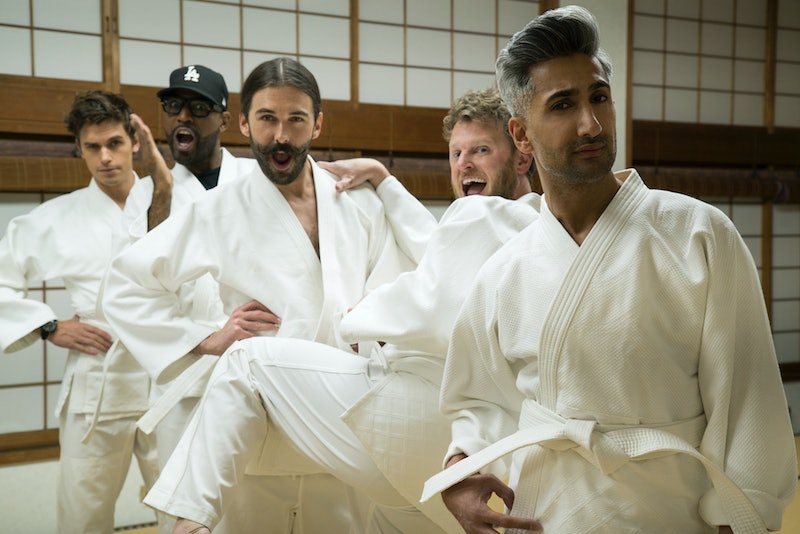 Get ready for more gorgeousness like you've never seen before. The Queer Eye: We're In Japan! trailer just dropped, and it's finally giving fans a glimpse at the Fab Five's first international heroes. Up until now, we've only gotten a few, brief teasers of what went down during their overseas adventure in Tokyo, but this latest clip proves that the four-episode mini-season might hold their most life-changing transformations yet.

The new heroes — Yoko, Kan, Kae, and Makoto — are only briefly teased in the new trailer, but it's clear they're going to be ones to remember. "In my opinion, they're some of the most incredible episodes because their stories are so unique," the show's fashion guru, France, told E! News back in May. "Their stories are so different than ours in the West." Queer Eye's interior designer/redecoration wizard, Berk, added in the same interview, "I think the first episode, probably is my favorite episode we've ever done."

That first episode — titled "Japanese Holiday" — that Berk was referring to focuses on a 57-year-hospice nurse named Yoko, who, per the Netflix release, "has given up on 'being a woman' and surrendered to neglect."

Episode 2, "Crazy In Love," will introduce the Fab Five to 27-year-old Kan, a gay man "struggling to live his truth" by being out and proud. "Kan must find the fearlessness to be himself," Netflix noted, "and introduce his boyfriend to family."

The third episode, "The Ideal Woman," will feature a guest appearance from comedian Naomi Watanabe, to provide a little extra encouragement for 23-year-old Kae. The press release described Kae as a long-bullied manga artist who "discovers the strength to break through the negativity," thanks to his new Queer Eye friends.

The fourth and final episode — "Bringing Sexy Back" —  has the gang meeting Makoto, a "painfully shy" 35-year-old who works in radio. "Makoto longs to reconnect with himself, his passions, and his wife," Netflix explained, and the Fab Five will be there to help him every step of the way.

Japan is a far cry from the show's previous locations — Kansas City and Atlanta — but the Fab Five welcomed the challenge of stepping out of their comfort zones. "We’d long had talked about wanting to do this in other countries and other spaces, but it proved that what we do, we can do it anywhere," the show's food and wine expert, Porowski, told Deadline back in June of filming in Japan. "Anybody can do it, and we hope that that shows as an example to not only LGBTQ youths, but also our allies, that that message of kindness is something we can all benefit from."

The four-episode mini-season of Queer Eye hits Netflix on Nov. 1.

More like this
Chrishell Stause & G Flip Have “No Rules Or Regulations” In Their Relationship
By Brad Witter
Bachelor Nation's Blake Horstmann Is Dating 'Love Is Blind' Star Giannina Gibelli
By Jake Viswanath and Radhika Menon
Move Over, 'Sunset'! The Drama-Filled Trailer For 'Selling The OC' Is Here
By Nola Ojomu
Fans React To Kelly Holmes’ “Extraordinary” ITV Documentary
By Sam Ramsden
Get Even More From Bustle — Sign Up For The Newsletter