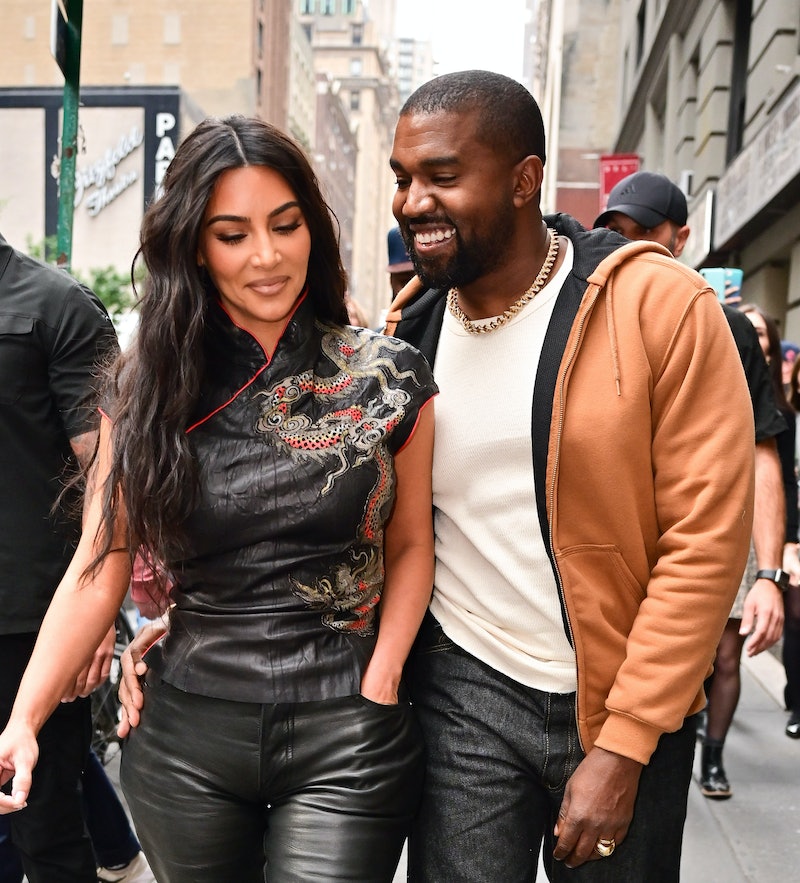 When it comes to growing his famous family, seven may be the magic number for Kanye West — even if his wife Kim Kardashian feels differently. During Monday's episode of The Late Late Show with James Corden, West revealed he wants to have seven kids with Kardashian, since he feels there's nothing more special than having a large family.

The rapper opened up about his marriage and family life during an Airpool Karaoke segment — a plane-centric twist on Corden's iconic Carpool Karaoke series — and explained that he and Kardashian have talked about welcoming even more babies into their home. "The richest thing that you can have is as many children as possible," he said. The pair are already parents to North, 6; Saint, 3; Chicago, 1; and Psalm, 5 months. Their youngest two children were welcomed via surrogate, as Kardashian suffered from difficulties during her previous pregnancies.

Though the reality star didn't cite those specific experiences as the reason she's done having children, Kardashian did tell The View in September that she feels "a house of four is wild, but complete." She added, "That means absolutely no more [kids]." In that same interview, the KKW Beauty founder also revealed that West "is on a no-help kick," so he's been in charge of the morning routine of all four kids.

West echoed those hands-on sentiments on Airpool Karaoke, where he explained that he doesn't like going out anymore and would rather stay home to spend time with his family. The rapper told Corden, "We’ll eat dinner and we’ll play with the kids and then we’ll put the kids to bed and then we go to bed. And then my wife watches Dateline [and] I read the Bible."

During a surprise appearance on Jimmy Kimmel Live! last week, West explained becoming a father and a family man "completely turned around" his perspective. He said he feels God is using him and his family to "show off" everything their faith can do. "I feel like there's so few individuals in a position like mine to be able to give their opinion and stand up and say that this is what family is about, and I feel that God is using me, and using the choir, using my family to show off," West said.

The rapper also told Kimmel that he was happy to see how much his oldest child North has embraced his Sunday Services each week. "I love the fact that my daughter wants to go to church and she has such a positive thought association of church because it's outside of the traditional four walls," West said.

Whether or not the Kardashian-West family welcomes more children in the future, it's clear the rapper sees his faith and calling to serve God as a way to bring his family even closer together.

More like this
Everything You Need To Know About Kanye's Post-Kardashian Dating Life
By Bustle Editors
Kim Kardashian Gives “Bucket List Dream” Lecture At Harvard
By Alyssa Lapid
The 12 Most Controversial & Unexpected Grammy Moments Ever
By Jake Viswanath
Taylor Lautner Thought Taylor Swift's 2009 VMAs Interruption Was A "Skit"
By Alyssa Lapid
Get Even More From Bustle — Sign Up For The Newsletter
From hair trends to relationship advice, our daily newsletter has everything you need to sound like a person who’s on TikTok, even if you aren’t.